For about a two week period each Spring, around the end of April, The Alnwick Garden comes alive with an abundance of Japanese cherry blossoms, just as the rest of the garden is beginning to emerge from its winter slumber. We made a return visit there last Thursday only a week after we had been there, which I wrote about at the time. We noted then that the orchard was about to bloom, and didn’t want to miss the opportunity to see this wonder of Nature.

In 2008, this orchard of more than 320 great white cherry trees (Prunus ‘Taihaku’) was planted in the east-southeast section of the garden. Now 20 feet tall or more, words are insufficient to describe the wonder of this cherry orchard in full bloom. 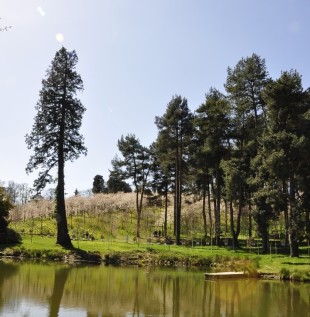 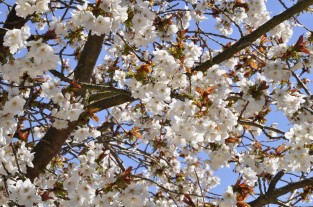 The orchard is touted as the largest in the world of ‘Taihaku’ cherries. And this particular variety has an interesting history linking Japan, an Englishman, and a Sussex garden.

Cherry trees are central to Japanese culture, but tastes in different varieties have changed over the centuries. ‘Taihaku’ cherries apparently went extinct in Japan in the late 19th century. Move on a few decades, and up steps a very interesting Englishman, Captain Collingwood Ingram (1880-1981) who, after an early career interest in ornithology, became one of the world’s authorities on cherries. Indeed he was often referred to as ‘Cherry’ Ingram, a colossus, introducing many different Prunus species and varieties to the UK.

And it was through his passion for cherries that, in the 1920s, he came across a single, rather decrepit tree of Prunus ‘Taihaku’ in a Sussex garden. He successfully took cuttings, returning some to Japan. The trees at Alnwick (and indeed all ‘Taihaku’ trees worldwide) derive from that single Sussex tree.

In 2016, Japanese author Naoko Abe published an account about Ingram’s contribution to the survival of Japanese cherries. Here is a 2019 review of that book published by the Irish Garden Plant Society.

Abe herself also wrote an article for the Literary Hub, which is well worth the time to delve into. It gives some interesting background about Japanese cherry culture, why varieties became extinct, and of course, how Ingram turned this situation around.

Since all ‘Taihaku’ trees are derived from a single individual following vegetative propagation, there is zero genetic diversity worldwide for this variety. It’s an extreme example of genetic vulnerability, but that’s not a situation unique to Prunus ‘Taihaku’. The danger is that a pest or disease may emerge to which the trees have limited or no resistance, and there are no opportunities for selection of genetically-different individuals that might withstand such challenges.

Another example is the potato in Ireland. During the Irish Potato Famine of the 1840s which decimated the Irish population, potato crops (predominantly of the variety ‘Irish Lumper’ or ‘Lumper’) were wiped out by the late bight pathogen Phytophthora infestans, all plants equally susceptible to the disease. Unfortunately there are too many examples of crops with a narrow genetic base that are under threat.

Let’s look at the situation in rice, a crop I am familiar with. It’s the world’s most important staple crop, providing sustenance daily (and indeed often several times a day) to half the world’s population. Since time immemorial farmers have cultivated tens of thousands of varieties. But over the past half century, new varieties such as IR36 and IR72 (from the breeding program at the International Rice Research Institute, IRRI, in the Philippines where I worked from 1991-2010) have been adopted across across millions of hectares in Asia, replacing many of those farmer varieties, and effectively becoming genetic monocultures.

In the world of genetic resources conservation, which was the focus of much of my professional life over many decades, scientists are continually concerned about losing different varieties, and genetic diversity overall. However, this loss of diversity, or genetic erosion as it’s known, has been occurring forever, as farmers swap varieties and adopt new ones, the sorts of choices that farmers make all the time. There’s nothing strange or concerning about that as such.

Let me elaborate with an example from the Philippines. In the mid-1990s, a major typhoon swept across the north of the main island of Luzon, destroying in its path much of the local rice agriculture. Since we had been carrying out fieldwork in that region prior to the typhoon and, with permission from the farmers, taken small samples of their varieties for genetic analysis, we were able (after seed increase at IRRI) to return to farmers the varieties they had been growing before the catastrophe. Some willingly took them back. Others decided that this was an opportunity to make changes to their farming systems and adopt new varieties. But that was their choice, not ours (Pham et al., 2002).

Varieties may be lost, but is the actual genetic diversity itself totally lost? We have some evidence from rice (Ford-Lloyd et al., 2008) that’s not the case:

. . . where germplasm and genetic data have been collected throughout South and Southeast Asia over many decades, contrary to popular opinion, we have been unable to detect a significant reduction of available genetic diversity in our study material. This absence of a decline may be viewed positively; over the 33-year timescale of our study, genetic diversity amongst landraces grown in traditional agricultural systems was still sufficiently abundant to be collected for ex situ conservation.

However, the authors go on to raise concerns about future threats to diversity caused by climate changes or different agricultural practices. While landrace varieties are grown they can continue to adapt to environmental changes.

Overall, however, with thousands of different varieties of rice (and a multitude of other crops and their wild relatives) safely conserved in genebanks around the world, genetic diversity has not been lost. It’s available to dip into by breeders who incorporate traits from the landraces into new varieties (just look at the example of IR72 below that has 22 landrace varieties and one wild species in its pedigree), or as we showed in the Philippines example above, returned to farmers so they can continue to benefit in different ways from these old varieties. 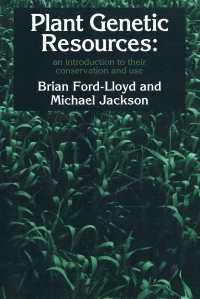 Just recently I’ve been involved in an online discussion among old friends and colleagues about the loss of genetic diversity over the decades, and how much has actually been lost. As Brian Ford-Lloyd and I wrote in our 1986 introduction to genetic conservation:

Hard facts relating to genetic erosion are not easy to come by; what has been lost already can no longer be accounted. One therefore has to resort mainly to personal impressions and subjective accounts.

What is important is that over the past half century, efforts have been stepped up to safely conserve old varieties and wild species in a network of genebanks across the globe. And, in recent years, that

effort has been backstopped financially and technically by the Crop Trust with grants in perpetuity to major world genebanks (such as those managed by eleven CGIAR centers) and the opening of the Svalbard Global Seed Vault in the permafrost high above the Arctic Circle.

However, even as these initiatives gain traction and deliver on their promises, we cannot remain complacent. Situations such as the ‘Taihaku’ cherry will continue to emerge (although perhaps not so extreme), and crops, wild species—and rare breed animals—will remain under threat. With habitat loss, and the threat of climate change that is gaining pace, never has genetic conservation (and use) been so important. ‘Taihaku’ can teach us a lesson if we take our eye off the ball.