Size does make a difference after all. Well, at least when it comes to airline seats. Not that the actual dimensions of Delta Comfort+ and regular Economy seats are different. It’s just that there are an extra four inches or so between the rows in Delta Comfort+ section of the cabin.

And what a difference those four inches actually make, as I commented last year. So, even though the cost of the Comfort+ upgrade had increased by £100, we felt that the added space and comfort (really the ability to move around in one’s seat, and not have the seat in front in your face) was worth the extra expense.

And that’s how we travelled to Minnesota just a couple of days ago, for our annual visit to St Paul to stay with Hannah and Michael, and grandchildren Callum and Zoë.

We arrived to Birmingham airport (BHX) around 09:10 for our 11:25 flight (operated by KLM Cityhopper) to Amsterdam Schipol (AMS, that takes around 55 minutes), only to discover that the check-in desks did not open until 09:25. Not the best situation for me these days, standing around on my weakened right leg. Anyway, once we had checked in our bags, we went through security quite quickly, although Steph was given a random check for explosives, and the hand gel that I was carrying was given special scrutiny. 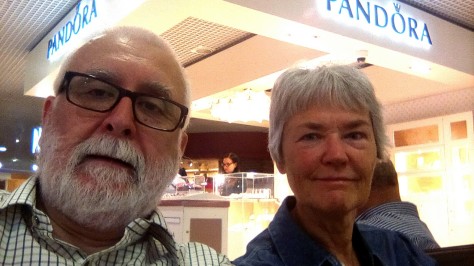 Sitting in the departure lounge at BHX waiting for our flight DL9415 (operated by KLM Cityhopper) to Amsterdam Schipol (AMS).

Our flight (an Embraer 190 aircraft) was boarded quickly, and the captain advised us that, at 11:10, we were ready to depart early. Only to come back on the blower just a couple of minutes or so later to tell us that two passengers had decided not to fly after all, and their bags would have to be found and removed from the aircraft. After all this we actually departed about 10 minutes late!

Being a Cityhopper flight, we arrived to a ‘bus gate’ at Schipol. This was actually rather convenient, since the entrance into the D pier was close to Gate D1 that Delta uses exclusively to process all its passengers but does not actually board any flight from there. And even better, our Minneapolis-St Paul flight DL165 was scheduled to depart at 15:35 from Gate D3. No long walks for me in Schipol last Tuesday, which was quite a relief.

I asked for priority boarding, and Steph and I were the first passengers on board the Delta A330-300, and quickly settled into our seats. 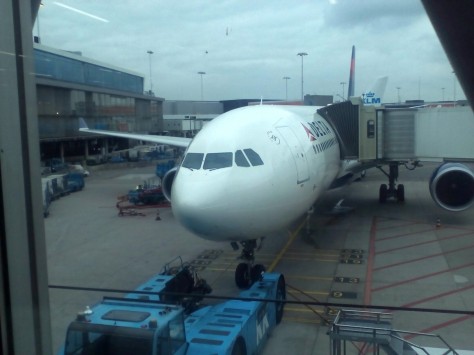 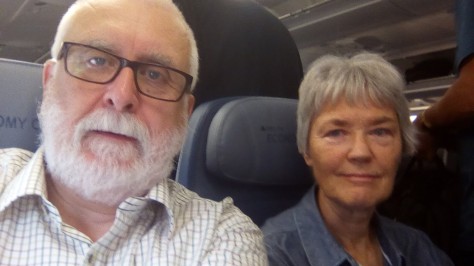 Around 15:30 (after we’d been on board for about 40 minutes) the captain said we were ready to depart, but then advised us that engineers were working on a fault with the water and vacuum system for the toilets (now that was an issue I’d experienced recently on my flight from Lima to Cali, Colombia), and there would be a slight delay. Ultimately we departed about 25 minutes late (and arrived into MSP delayed by about the same time).

Once we were on the move, we had a very smooth takeoff from runway 24, and climb out of the gloom over Amsterdam.

Initially, our flight headed towards London, and didn’t turn northwest until we had passed Bristol. That’s quite unusual based on previous flights, when we headed out from AMS towards Scotland. Anyway, we crossed Ireland, passed south of Iceland and Greenland, and heading in over North America on the coast of Newfoundland and Labrador, over Hudson Bay and Ontario in Canada, before the long descent into MSP once we had crossed the US-Canada border north of Duluth. 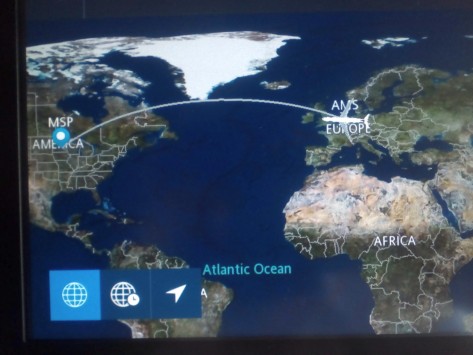 There wasn’t a great deal to see until we crossed the coast of Newfoundland, and then there was a spectacular view of the rugged coastline, with inlets bordered by precipitous cliffs. 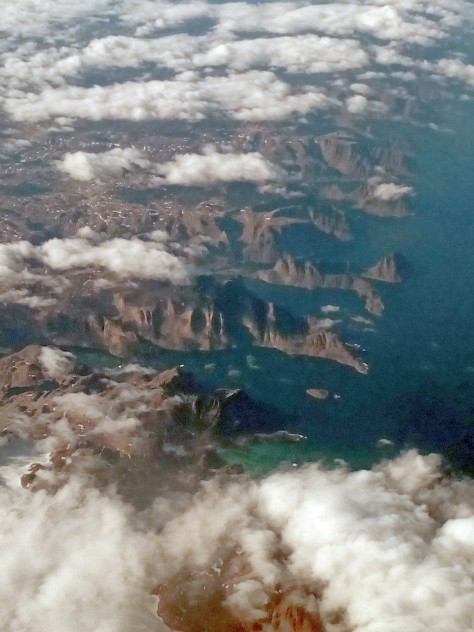 The spectacular coastline of Newfoundland and Labrador.

Mostly it was cloudy, with odd view of an island or two as we crossed the southern part of Hudson Bay. 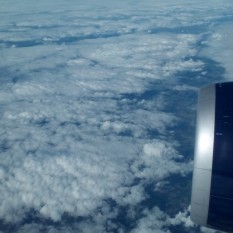 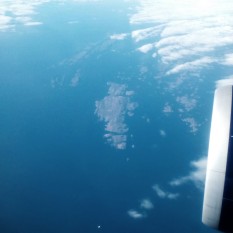 But for once, it was an incredibly smooth flight almost the whole way. In fact I can say that we experienced no turbulence at all, apart from the occasional little bump. And even though stormy weather had been predicted for our arrival around 18:00 in MSP, and the captain advised us during the descent that the approach could be rather bumpy, we had no bumps at all.

Nevertheless, a nine hour flight is a long time. Having made the same flight before in a regular Economy seat, and knowing how uncomfortable I was, the upgrades to Comfort+ have been worth every penny.

Also, the odd Bombay Sapphire or three during the flight certainly helps. I read something today that drinking gin is good for you. I don’t need any excuse. I enjoy it for itself, and also for the fact that it relaxes me during flights such as Tuesday’s. 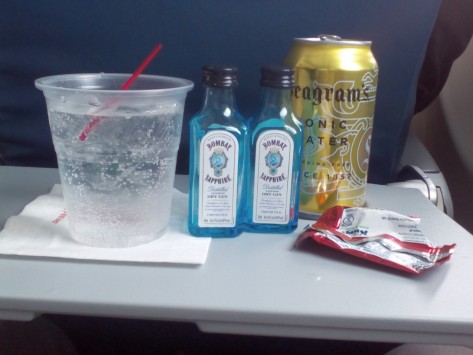 Delta serves a limited menu in Economy Class: chicken and . . . Having previously opted for the hot dish (and invariably regretted having done so), I decided to try the cold chicken salad, and surprisingly quite satisfied with my choice. About four hours afterwards the cabin crew came around with a snack – quit bizarre, but nice nevertheless. It comprised crackers and a red bell pepper spread, and a sachet of about a dozen green pitted olives. Never had anything like that on any flight before. Then just 90 minutes out from MSP we were served a hot cheese and chicken sandwich, and some ice cream. 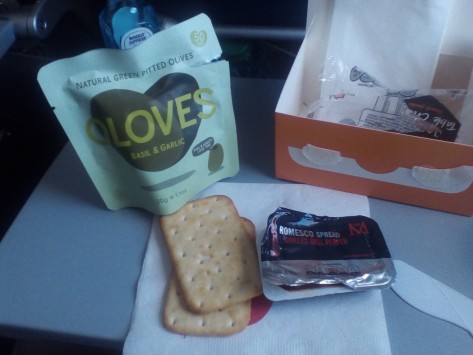 On arrival at MSP we were off the plane quickly and among the first passengers through Immigration. Our bags arrived quickly and before we knew it we were out and meeting Michael and the grandchildren.

Yesterday was still quite stormy and wet in St Paul, and we didn’t manage a short walk until quite late in the afternoon. Hannah and Michael moved house a few months back, just a few blocks from where they had been living. But it’s a larger house, and along the Mississippi River Gorge. These next photos were taken just a couple of minutes away from their house.

We are here in St Paul for the next three weeks. Although we don’t yet have any firm plans to travel, we are contemplating a short break in the north of the state, at the headwaters of the Mississippi and Itasca State Park. Some of the trees here in St Paul are already beginning to show the first signs of autumn colour. Perhaps we will see a more spectacular display in northern Minnesota.

Before I retired in 2010, I was able to fly Business Class for most of my international travel for flights in excess of eight or nine hours. Very comfortable indeed. You certainly arrive at your destination better rested (if not a little overhung occasionally) to take on the challenges of a new day of meetings. I’ve often departed from Manila on the Emirates midnight flight to Dubai. connecting with another to Rome just a couple of hours after landing in Dubai, then been in my first meeting less than two hours after arriving in Rome. I would have found that very difficult traveling in Economy. I know that’s the the norm for most travelers, and I’m just thankful that my employer saw the real advantages of Business Class travel.

However, since retiring in 2010 we’ve flown Economy for personal travels to visit our daughter in St Paul, Minnesota (MSP), and all flights were with Delta Air Lines from Amsterdam (AMS) or (on one occasion) from Paris-Charles de Gaulle (CDG), connecting from Birmingham (BHX). 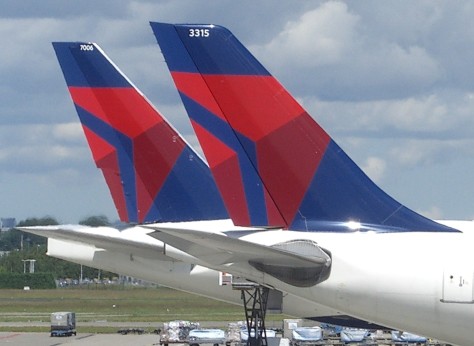 This year, having made our flight reservations way back in March, I decided that we should try Delta Comfort+, the airline’s ‘enhanced’ Economy service, offering wider spacing between seats, priority boarding, seating at the front of the Economy cabin, and free drinks. And for these ‘privileges’, we paid an extra £60 each per flight. Even so, the total amount we paid, £1,601, was less than we had paid in 2014 for ‘regular’ Economy seats.

Delta’s A330 aircraft have a 2-4-2 seating configuration in Economy, so I chose window and aisle seats as far forward as possible. Delta Comfort+ seats occupy the first five or six rows of the Economy cabin. We had 11A/B on the outbound flight, and 12A/B on the return (the second and third rows respectively). 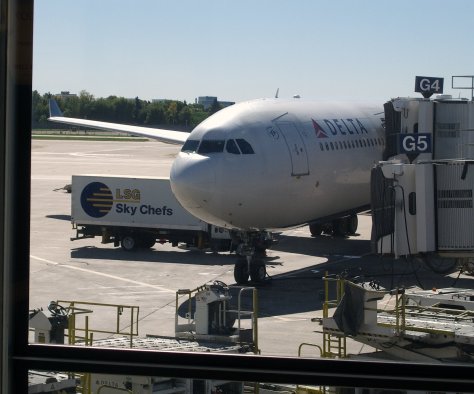 So, was Delta Comfort+ worth the additional expense? Well, ‘Yes’ and ‘No’. 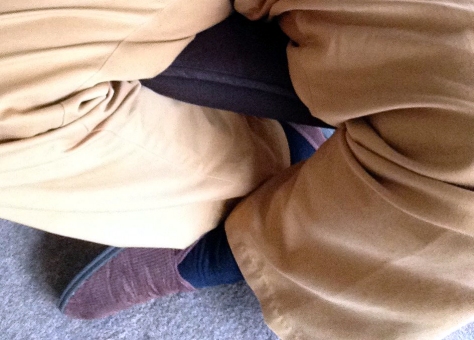 Delta doesn’t offer an ‘extensive meal menu’ in Economy: you can choose from a hot chicken dish, a cold chicken salad, or a pasta dish. And it’s been the same on all the flights to and from the USA that we have taken since 2010. I usually ask for the hot meal, and then wonder why I didn’t ask for the salad. This was most certainly the case from MSP – AMS last week. The ‘chicken BBQ’—small cubes of chicken in a spicy sauce (it could have been tofu for all I could tell), a slurry of sweet potatoes, and some veggies—was unpalatable, and almost inedible. The salad definitely looked much better value. But the brownie that was served up was delicious, containing large chunks of chocolate. More’s the pity, there was no ice cream on the return flight.

So, how would I rate Delta Comfort+, and would I recommend it to anyone considering flying Delta to the USA.

Recommendation: I think the extra expense was worth it, and I arrived at both destinations feeling fresher than I have done in past flights. I will certainly purchase Delta Comfort+ seats for our next flights.

However, in feeling more relaxed, I can’t discount the fact that this year we had no hassle whatsoever with our tickets, transfers, connections, etc.

Schipol Airport in Amsterdam is undergoing yet another refurbishment. But they have made one very important change since we last passed through. There are no longer any security checks and screening at any of the departure gates. Once through the central security, or when transferring flights, there’s no need for extra hand baggage screening, removing shoes, belts and the like, and passing through a security screen. Saves on time and on hassle. Also, Delta has taken over Gate D1 entirely. A brief security check is made there, a few questions, and it’s on to the actual departure gate that could be in any of the terminals. Fortunately our departure to MSP was from D45, nevertheless about 8 minutes walk from D1.

Here’s a video of the take-off and landing for each flight. I just love the roar of the engines as they spool up.