Once the weather improved in May and June, and we could get out and about more regularly, Steph and I visited several abbeys and priories managed by English Heritage that dot the landscape of this northeast corner of England, including Tynemouth Priory, Brinkburn Priory, Whitby Abbey, and Mount Grace Priory.

More recently, however, we’ve turned our attention to military historical sites, from the Romans (with visits to Chester’s Fort and Housesteads along the iconic Hadrian’s Wall) to the post-Norman conquest period of the late 11th century, with visits to Prudhoe Castle, Aydon Castle (more a fortified manor house), and most recently, Dunstanburgh Castle that proudly looks out over the North Sea on a windswept headland (home to the largest breeding colony of kittiwakes in Northumberland). 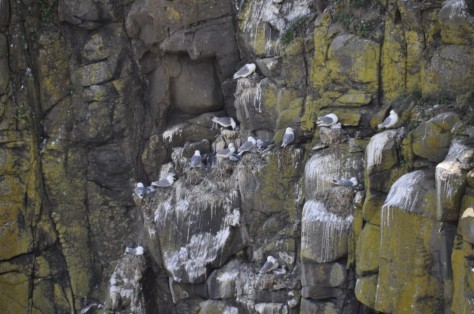 Northumberland has many castles, over 70 in fact. While most are ruins, shells of their former glory, some are still lived in today (such as Alnwick, Bamburgh, and Chillingham). All have played a significant role in British history, situated as they were at a great distance from the seat of power in London, along the border with Scotland (an independent country then), and prone to inter-familial conflict. Many castles and towers were also built for protection against the Border reivers, raiders from both England and Scotland who terrorized communities in the region.

Prudhoe Castle overlooks the River Tyne from a hill on the south bank, a little over 11 miles west of Gateshead (map).

The barony of Prudhoe had been granted to the d’Umfraville family, and construction of the castle began around 1100. It was this same family who built Harbottle Castle in the Upper Coquet valley that we visited a fortnight ago. It remained in the d’Umfraville family until 1381, when it passed by marriage to the Percy family, who became Earls and Dukes of Northumberland.

Prudhoe has an impressive gatehouse, with the room above converted to a chapel in the 13th century. The curtain wall encloses a large bailey or courtyard, and the remains of a substantial keep still stand on the west side. An 18th century manor house stands in front of the keep and now houses the offices of English Heritage and a museum. 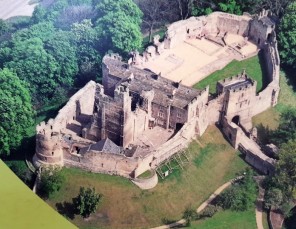 The castle from the pele yard

Prudhoe’s curtain wall on the north side, overlooking the River Tyne

Looking back from the gatehouse

The gatehouse from the bailey

the 13th century chapel above the gatehouse

The remains of the keep

Stairway inside the wall of the keep

I have posted more photos of the castle here, together with images (with descriptions) taken in the museum.

About 7 miles northwest from Prudhoe, as the crow flies, the fortified manor house of Aydon Castle occupies a site overlooking a small stream known as the Cor Burn (map). Its construction began in the late 13th century.

It’s remarkably intact, because since the 17th century it was used as a farmhouse, and apparently still occupied until the mid-1960s.

There is an outer courtyard, with enclosed battlements on the curtain wall surrounding the site, if the model of the house has been interpreted correctly (rather like those we saw at Stokesay Castle in Shropshire in 2015 (below).

Model of Aydon Castle, with enclosed battlements on two walls. 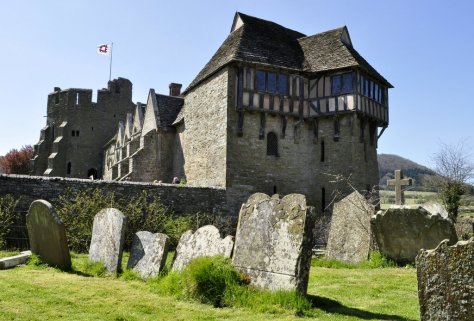 English Heritage has carefully removed the wall paneling and room partitions that were in place when the house was most recently occupied. So you get a real sense of what Aydon Castle must have been like in its fortified heyday. 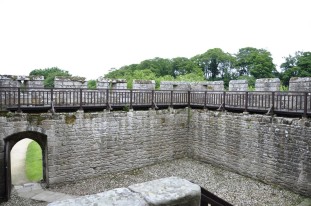 And there are more images and building plans here.

We have visited 14th century Dunstanburgh Castle several times, but this visit less than a month ago in mid-July was the first time we had ventured this far north since moving to the northeast last October (map).

There’s not too much of the castle left standing, apart from the main gatehouse, and a couple of towers on the east and north sides of the bailey. But the location is spectacular, and the cliffs teem with seabirds. 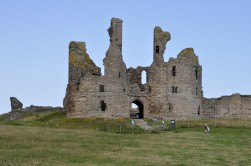 Even though the ruins themselves are not extensive, it’s perhaps the enjoyment of the walk from the village of Craster, some 1½ miles to the south, that attracts so many visitors. And, the Craster kippers of course. 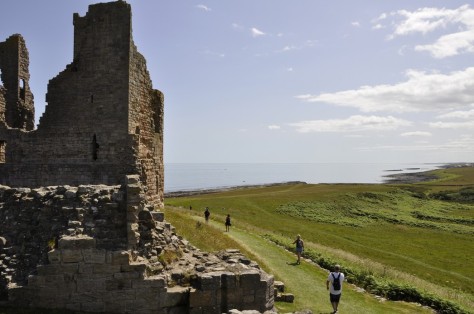 The view south towards Craster from the ramparts of Dunstanburgh Castle.

I have posted more images of our July visit here.

Dominating the horizon on the coast of Northumberland, and overlooking the cold North Sea, Dunstanburgh Castle was built during the fourteenth century reign of infamous King Edward II by the king’s cousin, Earl Thomas of Lancaster between 1313 and 1322.

Approaching Dunstanburgh Castle along the coastal path from Craster.

The castle can only be reached on foot, about 1.5 miles north from Craster. The castle is owned by the National Trust, but the site is operated by English Heritage.

View of the great gatehouse over the southern mere.

Overlooking cliffs on one side, the castle had excellent natural defences, and occupied the site of an Iron Age fort.

Thomas of Lancaster was executed in 1322, and it passed eventually passed into the hands of John of Gaunt, Duke of Lancaster. It changed hands between Lancastrian and Yorkist forces during the Wars of the Roses, and suffered damage from which it never fully recovered. By the sixteenth century it was in an advanced state of decay.

Today, just a few of the towers are standing, particularly the entrance Great Gate with its twin towers. Also the curtain wall that surrounds the castle connecting with the cliffs.

It’s possible to climb some of the towers from which there are magnificent views over the surrounding Northumberland countryside.

Righthand tower of the Great Gatehouse 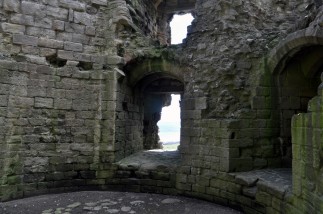 Inside one the towers of the Great Gatehouse

View over the coast, southeast from the Great Gatehouse

The view towards Craster from the Great Gatehouse

The Great Gatehouse from the Inner Bailey 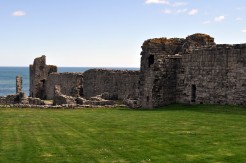 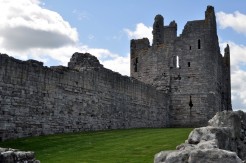 The Great Gatehouse from near the Constable’s Tower 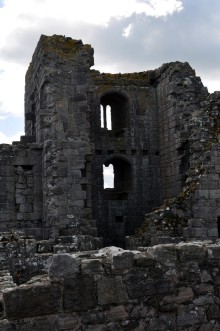 The Great Gatehouse from near Constable’s House

The Great Gatehouse from near Egyncleugh Tower 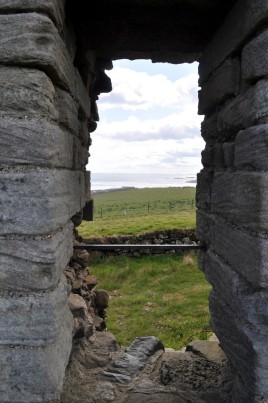 The view towards Craster 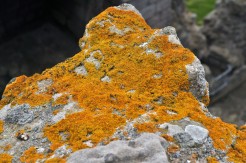 Lichens thriving in the unpolluted air

View north from the Great Gatehouse

Steph and I have visited the castle on a couple of occasions, the last being in May 2012. Parking in Craster, we enjoyed the coastal walk on a fine, bright but blustery day. The kittiwakes were nesting on the cliffs below the castle, and we spotted a weasel darting along a stone wall just above the tide line.

Then it was back to Craster for a pub lunch, and purchasing some of the renowned Craster kippers (smoked North Sea herrings).