John Bull is, according to the article in Wikipedia, the national personification of the United Kingdom in general, and England in particular.

One of my family names is Bull.

My grandmother, Alice Maud Bull, born on 16 April 1880, married my grandfather Thomas (Tom) Jackson on 23 August 1904. They had four children together, and she was also stepmother to Tom’s daughter and son by his first wife Maria Bishop, who died in childbirth in 1900.

Alice hailed from the village of Hollington in Derbyshire, about halfway between Ashbourne and Derby. Tom and Alice set up married life together in Burton-on-Trent, but returned to Hollington after Tom retired. Grandma was 68 when I was born; grandad was almost 76. So I only ever knew them as elderly folks.

My parents and my elder brother Edgar and myself with Grandma and Grandad Jackson at Ebenezer Cottage in Hollington, around 1958.

My father Frederick was the second child born to Alice and Tom, in September 1908. My dad married Lilian Healy in 1936; I was born 12 years later in November 1948, the youngest of four children. My middle name is Thomas, after my grandad. My wife Stephanie and I named our younger daughter Philippa Alice after my grandmother.

After my father passed away in 1980, my eldest brother Martin began a long search into our family ancestry, that has lasted more than 37 years. He has uncovered many of our family ties, stretching back (on the Bull line at least) to the late 15th century, some fifteen generations, and almost as far on several other lines.

I’m the 13th great-grandson of a man named Bull who was born around 1480 on the Staffordshire/Derbyshire border (where many of my ancestors hailed from), probably in or near Ellastone (as that was where his son and grandson were born and buried). Several generations of Bulls over 200 years lived in the village of Cubley in Derbyshire, less than five miles from Ellastone.

My father’s side of the family comprised, at the beginning of the 16th century, some 16,000+ direct ancestors, about 0.5% of the population of England. Do the maths. We can’t all have completely independent family lines, so they must come together in a vast web of inter-relatedness, sharing many ancestors in common, if we could just make the connections.

Knowing the names of my ancestors in this way also helps me connect vicariously with the major historical events through which they lived. But, because they were living in rural Staffordshire and Derbyshire, it’s hard to fathom how their lives might have been affected. The Bulls were, in general, farming and laboring stock.

Mr Bull was born, in 1480, at the end of the reign of King Edward IV, and five years before King Richard III was killed at the Battle of Bosworth Field that, as the last major battle of the Wars of the Roses as they became known, heralded the founding of the Tudor dynasty by Lancastrian claimant to the throne, Henry Tudor, who became Henry VII. Henry Tudor passed through this area, or perhaps a little to the south on his way to Bosworth Field. Were men from the villages around forced to join his army?

Thomas (b. 1505) lived through the end of the reign of Henry VII, and the reigns of Henry VIII, Edward VI, (Jane) and Mary Tudor. It’s highly probable that the Dissolution of the Monasteries (beginning in 1536) was keenly felt, as there were several nearby monastic houses in Staffordshire and Derbyshire. Did they hear about the sinking of Henry VIII’s flagship, the Mary Rose, I wonder?

By the time his son and grandson, also both Thomas, had passed away, Elizabeth 1’s long reign had come to an end; the Tudors were history, and James I (and VI of Scotland) was on the throne, the beginning of the ill-fated Stuart dynasty. Thomas (b. 1581) and his son Robert (b. 1613) lived through the English Civil Wars between 1642 and 1651, the defeat of the Royalists, and the execution of Charles I in 1649, an event that must have rocked England to its very soul whether you favored the Royalist or Parliamentary side. Who did Thomas and Robert favor? The closest major conflict to where they lived in Cubley was the 1643 Royalist Siege of Lichfield, just 20 miles due south. Certainly both Royalist and Parliamentary armies criss-crossed this area of Mercia.

Here is a timeline of England during the 17th century.

Robert (b. 1613), his son Robert (b. 1653), and grandson Joseph (b. 1679) knew the restoration of Charles II in 1680, then lived through the tumultuous years of James II and William III and Mary II, the Glorious Revolution, the consequences of which passed through to the late 20th century in Northern Ireland. During the reign of Queen Anne (1702-1714), the kingdoms of England and Scotland were united into a single nation, Great Britain, under the Acts of Union. John Churchill, 1st Duke of Marlborough (an ancestor of Sir Winston Churchill) achieved significant military success in Europe during the War of the Spanish Succession. 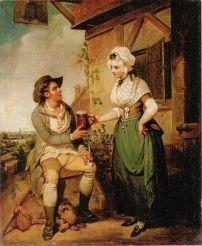 Joseph, son William (b. 1712), grandson Samuel (b. 1761), and great-grandson John (b. 1793) were Hanoverians through and through. This is an English timeline of the 18th century of industrial innovation.

Joseph lived through the two Jacobite uprisings of 1715 and 1745, the latter experienced very close to home as the Scots under Bonny Prince Charlie reached as far south as Derby. Fear and alarm must have spread throughout all communities in their path.

Samuel and John lived through the French Revolution in 1789, and the wars with Napoleon Bonaparte until his defeat at the Battle of Waterloo in 1815. Were they or their relatives called upon to serve under the Duke of Wellington?

John Bull, my 2nd great-grandfather was born in 1825, half way through the reign of George IV, and died in 1900 just as Queen Victoria’s reign was coming to an end. All my subsequent Bull ancestors were Victorians – a period of industrial expansion, the building of the railways (and demise of the canals), and Empire! My great-grandfather, John, was born in Hollington in 1855, and worked as smallholder farmer and coal merchant. The family remained in the same area of Derbyshire throughout the 19th century.

During five centuries many of my Bull family (and probably those who married into the Jackson line as well) came from and continued to live in quite a small area of Staffordshire and Derbyshire. People mostly married from the same communities, or from others not more than a handful of miles away. After all, a man had to do his courting on foot, until the late 19th century¹ at least. I’ve heard that Tom Jackson walked miles to court Alice.

It has been fascinating to see my family history unfold, and what Martin has achieved is truly incredible and inspiring. People, names, and dates bring history to life.

¹ John Jinks, who was Professor of Genetics at the University of Birmingham, hailed the safety bicycle as one 19th century invention that probably did more for human population genetics than had ever before occurred, since couples could now more easily court over greater distances.