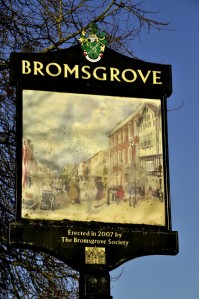 Until I retired in April 2010 (aged 61) I had been quite active in the previous decade, playing badminton twice a week, and swimming at the weekends. As you can imagine playing badminton was quite strenuous in the heat and humidity (>30ºC/>80%RH) of Los Baños in the Philippines (where I worked for 19 years at the International Rice Research Institute). However, when Steph and returned to the UK, to our home in Bromsgrove in northeast Worcestershire (about 13 miles south of Birmingham city center), I needed to find some other form of exercise.

So, almost religiously since then, I have walked an average of 2 miles a day, around 45 minutes, at about 2.8 mph. Some days I don’t go out, especially if the weather is inclement, but other days, I may walk three to four miles or more. And I have taken these opportunities to explore my ‘home’ town, visiting areas I had never visited when we lived here in the 1980s.

To some extent, the same old walks have become somewhat stale, the same routes, so I always enjoy when we decide to go further afield (by car in the first instance) and then make a long walk. The parks at two national Trust properties, Hanbury Hall and Croome Park (7 and 20 miles from home, respectively) offer good long walks and beautiful landscapes.

Walks around Bromsgrove are mostly less photographically attractive, in the main, but there is a number of interesting landmarks that are worth documenting.

So, with this in mind, I’ve decided to begin a series of blogs, Walking with my mobile, in which I will illustrate the various walks that I make, with photos linked to the various via points added to a map for each.

Today’s walk, just over 2 miles and taking 44 minutes, was a test, as it were, of what I intend to do. I had thought of taking my Nikon D5000 DSLR camera (18-200mm) camera with me. But for a routine walk it’s rather heavy. So I decided to use my mobile phone camera.

In 2016 I acquired my first smartphone. It’s a Doogee X5pro, running Android 5.1, with 4.92MP camera, not the high resolution that is standard on much higher spec (and considerably more expensive) phones. But for the purposes of my walks, I reckon these images will be fine. See what you think.

Click on any of the via points to open an image or two. And this is what I’ll do in subsequent Walking with my mobile posts. Each red point has an image associated with it; the grey points just fill in some of the gaps in the route. 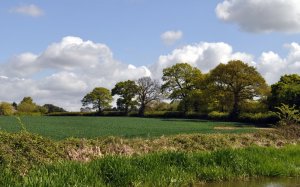 Yes they do. On my daily walk I often see people out jogging, and they never look like they are enjoying themselves. Many use an iPod to take away some of the pain, I guess. I once used my iPod on one of my walks, but then I realized how much I was missing: the silence of the countryside (at certain times of the year), dogs barking, farmers ploughing or harvesting, a 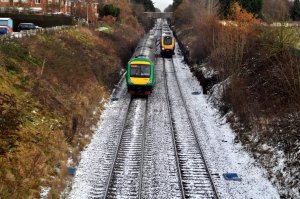 buzzard mewling high above or a robin singing its heart out in the hedgerow, an approaching train picking up speed to tackle the Lickey Incline, or a distant siren – police, ambulance, or fire, someone in trouble.

Some days, when the weather is a little grey, I don’t have much enthusiasm for going out. But there again, since I’ve been taking my daily constitutional over the past 2½ years, I can say – without reservation – that it’s been a mostly pleasant activity, and about the only exercise I take these days.

During my time at IRRI, I wasn’t particularly active for many years. However, I did develop quite a strong right arm – my drinking arm (I do like wine and whisky). I’m glad to say that’s all behind me; my alcohol consumption has dropped – dramatically (>95%) since I retired.

For 17 years from 1993 I did scuba dive as often as I could. But from about 2005, I did start to play badminton on a regular basis, and even took up swimming again. I really can’t explain why I had not taken advantage of the great facilities at IRRI Staff Housing, or down at the research center. Laziness I guess, and lack of inclination. 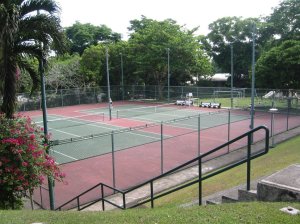 At Staff Housing, we had three tennis courts, and for a number of years in the early 90s I did play as part of a 4-some whenever possible, at 6 am before office hours. But one thing led to another, I had to travel, and gradually lost my place in the regular group of players. 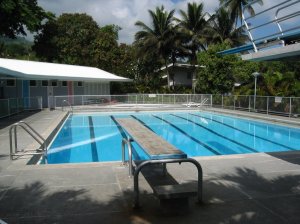 We had a beautiful swimming pool, but I never really appreciated it until about 2007, when I started to go each weekend, swimming for about 30 minutes at each session. Having bought some goggles, I taught myself to swim better than I’d ever done before, and really began to enjoy it. Even on home-leave I used to use the public pool in Bromsgrove almost every day, as it was free for the over-60s. Unfortunately, just after we returned to the UK in 2010, the Bromsgrove Council decided to reintroduce a fee for us oldies, and I decided that spending upwards of £20-30 a week was just not sustainable with no regular income.

I started playing doubles badminton with staff in my Office for Program Planning and Communications (DPPC). Two of the staff, Vel and Sol (who left us in 2008) had been partnering each other in an internal competition. My 2-I-C Corinta and I decided to challenge Vel and Sol, although I’d not played since my student days at Birmingham in the 70s, and Corinta had hardly ever played at all. They wiped the floor with us! But as the weeks progressed, 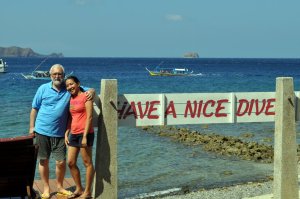 our skills improved to the point when everyone could enjoy a good workout, and games were no longer one-sided. When Yeyet joined DPPC after Sol’s departure, we persuaded her to join us on the court.

Around 2003 I bought an exercise bike from a colleague who was leaving IRRI. This photo must be one of the few occasions when I used it. Steph, on the other hand, spent at least 30 minutes a day on the bike.

So now my exercise is walking. In the early 1980s I’d had to visit the doctor because I had severe pains in my hips and knees, and she diagnosed arthritis. And her advice was never to jog – how fortunate, because although I had jogged a little before, I HATED it.

Last Christmas one of my presents was a gizmo called the Fitbit – an electronic pedometer. Unless I forget (which does happen, annoyingly) I take this with me on my walk, and so have quite a good record of the distance traveled since early January when I first calibrated it. I’ve now covered more than 530 recorded miles (probably well over 650 if I estimate the miles walked without my Fitbit); the dip for June shown in the graph below represents the time I spent in the USA that month. We were also away for eight days in September, and some days earlier in the year in May, and I didn’t have my Fitbit with me. 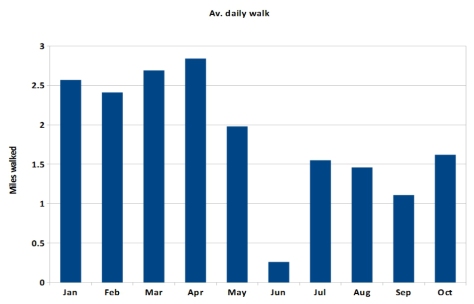 I certainly don’t feel miserable when out walking, and hope I don’t look so. I have my trusty trekking pole with me – good for hills, but also for threatening any dog that threatens me. But despite this regular exercise, my BMI stays stubbornly high. Maybe I’ll have to up the daily average.

After a couple of weeks of mostly excellent weather while the London 2012 Olympics were taking place, it has been quite iffy since then, and we’ve even had some torrential downpours from slow-moving storms. We’re back to the Jet Stream hovering just south of the country allowing North Atlantic weather systems to blow in and give us quite unseasonable weather. 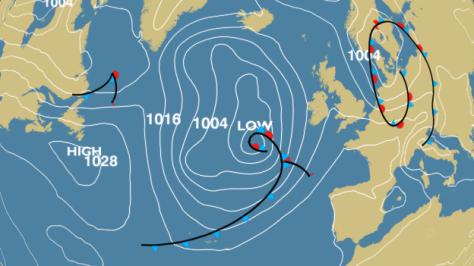 But today has been different. Although it’s been breezy at times, we’ve had a bright sunny morning, and quite warm, thanks to a weak ridge of high pressure shown in the map above.

Not having had chance to get out and about for my (almost) daily walk recently, I relished the opportunity today of walking along the local Worcester and Birmingham Canal. Whatever the weather, it’s a great walk – from just a mile or so, to upwards of a dozen or more, to and from where we often park the car. In both directions (north and south) one eventually comes to tunnels, and the towpath then winds it way up and over to join the canal on the other end of the tunnels.

Today, Steph and I just made a short walk of about three miles, from Whitford Bridge (just near the Queen’s Head pub), to one of the local access roads, Upper Gambolds Lane.

Just after we started our walk we saw four buzzards flying over head (photo courtesy of Barry Boswell), seeking the thermals and wheeling ever upwards until we could hardly make them out. But even though they were hard to see we could hear them mewling to each other. (Just a few days ago I’d seen four other buzzards quite close to the centre of Bromsgrove, calling to each other, and displaying the tumbling flight which is one of their characteristics.)

At first we were rather surprised that there were so few other folks out walking, and the canal traffic itself was also quiet even though it’s a Bank Holiday weekend here in the UK. However, we finally came across about five narrowboats that were following each other up the Tardebigge flight of 30 locks, one after the other.

On a walk like today it gives me chance to hone some of my digital photographic skills. I’m finally getting to grips with my Nikon DSLR. Here are just a few of the photos I took this morning.

Even though the flowers are dying off there’s the glory of developing fruits and seed heads. There was definitely a whiff of autumn in the air today. The nights are drawing in quite rapidly, and it won’t be too long, I guess, before we get the early morning mists developing over the waters of the canal. And eventually those first frosty mornings, with a weak sun forcing its rays through the mist. It’s definitely a canal for all seasons.