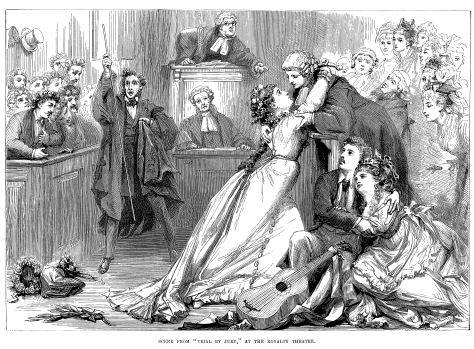 “Now, Jurymen, hear my advice —
All kinds of vulgar prejudice
I pray you set aside:
With stem judicial frame of mind.
From bias free of every kind.
This trial must be tried.”

First produced at the Royalty Theatre, London, on 25 March 1875, Trial by Jury was the first of 13 Savoy operas (and only the second collaboration) between librettist Sir WS Gilbert (with whom I share my birthday) and composer Sir Arthur Sullivan, others including The Mikado, HMS Pinafore, and The Pirates of Penzance.

The quotation above, sung by the Usher almost at the very start of the opera, exhorts the members of the jury to fulfill their duties faithfully. So what has this to do with me?

In mid-October I received a summons to attend Worcester Crown Court on 16 December to serve on a jury. Since it’s a legal requirement to serve, and I had no extenuating circumstances that would prevent me serving, I duly completed the summons form and waited for further information. Funnily enough, only a few weeks beforehand, I had wondered if or when I might be called for jury service since it had never happened before. Names are selected at random from the Electoral Register.

So my schedule was set, and I had to commit two weeks for the court. About a couple of weeks ago however, I received a phone call from the court advising that since too many potential jurors had been summoned on the same day, they wished to re-schedule my attendance for the beginning of February next year. But as I’m working on a part-time consultancy for the 4th International Rice Congress in Bangkok in October 2014, and I need to be in contact with colleagues in the Philippines and Thailand on a regular basis – and I’d already informed everyone that I would be tied up with jury service from 16 December – I was able to keep to the originally agreed schedule.

The wheels of justice turn ever so slowly
Early on the Monday morning (16 December) I caught the 08:23 train to Worcester so I would get to the court by the agreed time of 09:15. As the train journey from Bromsgrove was only 18 minutes (and on time), I arrived in good time, especially as the court building is only a couple of hundred meters from the station in Worcester. And at the court I joined 29 other potential jurors. We were escorted to the jury waiting room on the first floor in readiness for a briefing. Little did I realize then that I’d  come to know that room very well indeed.

Following the briefing of what to expect as a juror (with a very informative DVD to explain all the details) we were divided into two groups of 15, and told to be ready to go into court shortly. In fact the other group from mine were immediately ‘partially released’ until 14:00 when their case was expected to begin. Our group sat and waited until 13:00 expecting to be called into court at any moment, only to be released for lunch until 14:00. At 15:10 we were informed that the defendant had changed his plea to guilty, and we would be no longer needed for the day, and could go home. But with the proviso that we had to ring in after 16:30 to check if we were needed the following day.

I had to return to court on the Tuesday morning, but only at 10:30. It was then we discovered that only 15 of the original 30 had been recalled, and we were a mix of the two groups. And again we sat around, while (apparently) the defence and prosecution counsel and the judge discussed various matters relevant to the case. Just after 13:00  we were told that both defendants had changed their plea to guilty and there would be no trial. And furthermore, we were being ‘released completely’ and did not have to return again. The previous morning we’d been told that the week before Christmas was a good week to be called for jury service, since the courts were trying to schedule cases to be completed during the week, and in any case, the trial judges would be replaced with new ones in the New Year.

So that’s the extent of my jury service: almost 10 hours sitting in a side room waiting to be called. I’ve completed my civic duty, answered the summons for jury service, and never even got to see the inside of a court room. If I am summoned in the next two years I can refuse, but after that I have to attend again. When I turn 70 I will no longer be eligible for jury service.

And so let me finish the short piece with a video of the judge’s song from Trial by Jury (taken from the 1953 film of the Gilbert and Sullivan story). I never had chance to see if ‘our’ judge had some interesting tales to tell:

One thought on ““Do you find the defendant guilty or not guilty?” We never got to decide.”