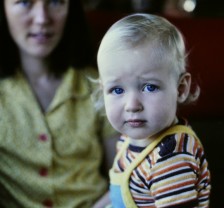 In July 1979, Steph, Hannah (aged 15 months) and I enjoyed a couple of days or so in San Francisco, and then headed up to Vancouver on Canada’s west coast. I was to attend the annual meeting of the Potato Association of America. Arriving in Vancouver we headed to conference venue, the beautiful campus of the University of British Columbia, sited on the western end of a peninsula jutting out into the Strait of Georgia opposite Vancouver Island.

It was a bit of a scrum, to say the least, when we arrived to the hall of residence where we had reserved a room. I say ‘room’, because the conference organizers wanted to put the three of us in separate rooms, not appropriate for a family of three. After discussing this vigorously with the staff behind the reception desk for almost an hour, a two-room suite was miraculously found, with its own bathroom. We made up a bed for Hannah with blankets and the like on the floor. It must have been fine since she slept soundly, and hasn’t mentioned it or complained about it since!

Well, having taken a few days out on the way north from home in Costa Rica, after the conference we planned to hire a car and drive across the Canadian Rockies, to meet my elder brother Ed and his wife Linda in Banff, Alberta, before driving on together to their home in Edmonton. Ed was a professor in the Department of Geography in Edmonton.

From Edmonton, our itinerary would take us by air to Madison, Wisconsin where I’d would spend a couple of days with plant bacteriologists Profs. Luis Sequeira and Arthur Kelman in the university’s Department of Plant Pathology (both had links with my employer, the International Potato Center). Luis was also an adviser to one of my potato research projects in Costa Rica. We also planned a side trip to the USDA’s Potato Introduction Station and its genebank at Sturgeon Bay in Door County on the shores of Lake Michigan in the northeast of the state. And from Madison, we would fly home to Costa Rica with transit stops in Chicago and Miami. Quite an adventure for a 15 month old toddler.

The conference sessions lasted four days. On the penultimate evening we enjoyed, along with all the other delegates and their families, a wonderful Northwest Pacific salmon barbecue on the campus lawns. It was an idyllic evening, no need for warm clothing.

But while I was stuck indoors during the conference, Steph took advantage of several tours to get out and about around Vancouver, at Stanley Park, crossing Lion’s Gate Bridge, and taking the cable car up to Grouse Mountain for spectacular views over the city.

At many of these conferences, it is customary to offer several day excursions from which you can choose. While most of those at the Vancouver meeting looked at many different aspects of the potato industry in British Columbia, the one I chose (as most appropriate for the family) was a day trip by steam train, the Royal Hudson, from Vancouver along Howe Sound north to the small community of Squamish. Imagine my surprise on arriving at the station to find a large number of delegates waiting for the train, many of whom I’d expected to take the more ‘technical’ excursions. 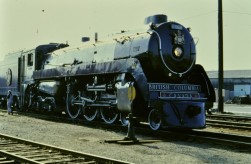 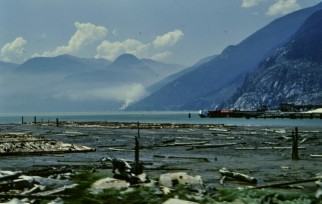 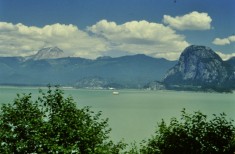 The Royal Hudson 2850 was the locomotive that, in May 1939, pulled the train carrying HM King George VI and Queen Elizabeth across Canada, during the first visit to Canada by a reigning British monarch. Our locomotive was 2860. I’m pretty certain that it was oil-fired rather than coal. Anyway, it was a delightful way to spend a day, see the mountains along Howe Sound, and the spectacular mountains that are a backdrop to Squamish itself.

I believe the conference finished on the Thursday lunchtime, and that gave us plenty of time to set off on the road trip eastwards up the Fraser River valley to Kamloops, some 225 miles, where we’d booked a room for the night.

To Banff the following day would be another 300 miles, and take all day. We met Ed and Linda in Banff, and the next day made a side trip into the Athabasca icefield at the southern tip of Jasper National Park, just north of Banff. Needless to say the drive through the Rockies was breath-taking, and there were ample opportunities to stop, and stretch our legs, especially important for an active toddler. It’s remarkable looking back on this trip what ‘risks’ we took. Steph sat in the backseat with Hannah on her lap. I’m not sure if Steph had a seat-belt. Hannah did not have a child seat. Wouldn’t be allowed today, and we wouldn’t even consider travelling under those circumstances. 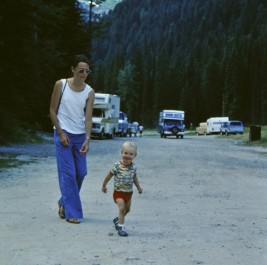 Leaving Banff, it was downhill all the way, skirting Calgary, before heading north to Edmonton, a distance of just under 260 miles. We spent a few days in Edmonton before it was time to move on, and continue our trip in Madison.

I’ve seen various parts of the Rockies over the years, in Colorado, around the edges of Yellowstone National Park in Wyoming (including the Teton Range). Magnificent as they are, they don’t really hold a candle to the Rockies further north in Canada, and I’m pleased that we were able to enjoy them almost 40 years ago.

Arriving for my early morning appointment at CIDA on the opposite side of the Ottawa River in Quebec, I found the building closed because of a water leak the previous day. There was only a skeleton staff on duty – but not my contact, who’d not had the courtesy to inform me (before I even flew up to Ottawa) about the problem, or cancel or reschedule our meeting. I was left to twiddle my thumbs for a few hours before I could head off to IDRC, so took advantage of the fine weather to look at the Ottawa River, a canal that connects the Ottawa River with the Rideau River, and Canada’s beautiful Gothic Revival parliament building on Parliament Hill. I spent two nights at the Fairmont Château Laurier, just to the east of Parliament Hill.

Looking across the Ottawa River to Quebec 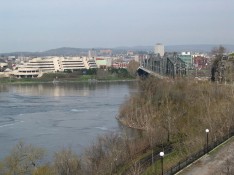 Across the Ottawa River to Quebec

The canal that connects the Ottawa and Rideau Rivers

Parliament Hill from the banks of the Ottawa River 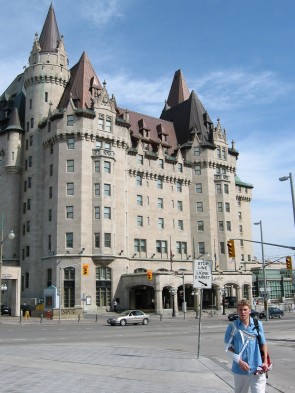