Leaving Waterford, ME for Niagara Falls early on the morning of 15 June, we allowed two days for this sector of our trip, 366 miles on the first day, and 289 on the second.

We headed west to the Kancamagus Highway through the southern part of the White Mountains of New Hampshire, and a slow climb to reach the the pass at 2855 feet. The cloud level was quite low, and at some scenic overlooks there was sometimes very little to see. But luck was on our side, and we did have some spectacular views in all directions, particularly at Pemigewasset Overlook northwards.

There were many road signs warning of the presence of moose along the highway throughout much of the trip in New England. But we saw neither hide nor hair, not even an antler. Roadkill raccoons were two a penny. This road sign (courtesy of Trip Advisor) warns drivers at the start of the Kancamagus Highway. 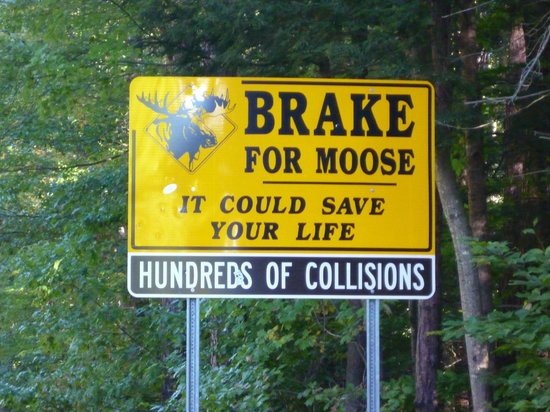 Once across the mountains, we turned south for about 30 miles on I-93, to join US4 to cross Vermont, a section we had more or less traveled the week before.

About 10 miles south on I-93 we saw a sign for road works ahead, and we could see the traffic slowing. But then I could also see vehicles moving beyond the ‘obstruction’, one at a time. Funny situation, I thought to myself. Anyway, to cut a long story short, agents (maybe 20 or more, plus dogs) of the US Customs & Border Protection were checking all vehicles for occupants. And, having British passports, we were asked to pull over while I retrieved our passports from a suitcase in the back. Once checked, we were waved on our way. By coincidence, I had read earlier that day a story about these ‘border checks’ miles and miles from any international border (with Canada in our case, or in the south with Mexico).

Once in Vermont we passed through a pretty town named Woodstock. No, not that one – that’s in NY. There was an interesting covered bridge, constructed in 1969 to replace an iron one that had been put across the river in 1877. Apparently this wooden construction was cheaper than other options.

Our destination for this night was Herkimer, NY, about 10 miles east of Utica. Crossing from Vermont into New York, we headed north into the Adirondacks Regions and west around Indian Lake, following for the first part, the valley of the Hudson River.

The following day, we headed west from Herkimer towards Ithaca (home of Cornell University). We passed through many delightful villages, among them Sauquoit where Steph spotted a memorial plaque. I regret not stopping, since it commemorated Asa Gray, born 18 November 1810 (same birthday as me), who is considered the preeminent American botanist of the 19th century.

We enjoyed the rolling landscape, dotted with small farms, the chapels in the villages.

St Paul’s Church, Paris Hill, established in 1797. This is the oldest parish in Western New York, from 1838.

At Ithaca, we stopped to have a picnic lunch beside Lake Cayuga, one of the Finger Lakes that characterize this part of upstate New York.

This is also wine country, and the views across Lake Seneca heading north towards Geneva were stunning. Wineries everywhere!

As we had a prior engagement in Niagara Falls NY that evening, I changed our route, joining I-90 west just north of Geneva rather than cutting across country (a much longer route) as I originally intended.

We arrived in Niagara Falls just before 5 pm, and after checking into our hotel close to the city center and the Falls, we decided to stretch our legs by taking the short walk to the American Falls. The light was just right, and although it was quite busy, I’m sure later in the season this site could be heaving with tourists.

So what was this prior engagement? We had arranged to meet my cousin Patsy and her husband David, who had driven down from Ottawa the day before and were staying on the Canadian side. They had never been to Niagara Falls before either. I had met Patsy just once, in the summer of 1972 a few months before I headed off to Peru. Patsy (just 12 then) and her elder sister Karen had come over to the UK with their mother Bridie, one of my Mum’s younger sisters, to meet the Healy side of the family.

We had arranged to meet for dinner at a small Italian restaurant, La Cuccina Di Mamma on Rainbow Boulevard. What a lovely time we had: great company, good food, and heaps of reminiscing! Steph and David were most indulgent towards Patsy and me.

The next day we were up early to take advantage of the good weather, and to view the Horseshoe Falls from Terrapin Point on Goat Island, and the American Falls in the other direction from Luna Island.

The best views of the Falls (mist permitting) are from the Canadian side, but we decided not to cross over. Instead, Patsy sent me these two photos of the American and Horseshoe Falls from their side of the border.

Around 10 am, we’d explored all that we wanted, and so set off on the next stage of our journey, 760 miles over two days southwest through New York into Pennsylvania, Ohio, a brief stretch through Kentucky along the Ohio River, and on to Bloomington, Indiana.

Massachusetts to Minnesota (1): the first three days in MA, VT and NH

One thought on “Massachusetts to Minnesota (3): onwards to Niagara Falls”