Cornwall is home to several National Trust jewels. We visited these four:

Knowing how popular St Michael’s Mount can be (even slightly out of season, as we were), Steph and I decided to head to Marazion early on the day of our visit, so we could easily find a parking place. I guess we must have been there before 9:30 am, and knew we’d have to take the boat over to the island as the tide was still ebbing then and the causeway was still covered.

Parking was no problem. However, when we returned from our visit to the island just before 2 pm, visitors were streaming across the open causeway in the hundreds, and it seemed as if every parking place was already taken in the several car parks along the sea front.

Just before 10 the first passenger boat of the day pulled up alongside the jetty, and about eight persons clambered aboard. Since the sea was calm, there being no waiting queue of visitors, and it being the first boat, the boatman suggested going right round the island instead of just across directly to the harbor on the island. What a treat, as we had many different views of the island and buildings that would not have seen on a normal crossing. 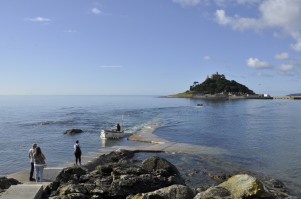 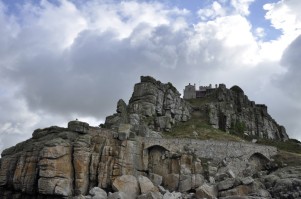 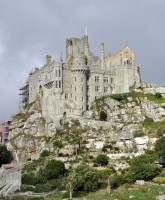 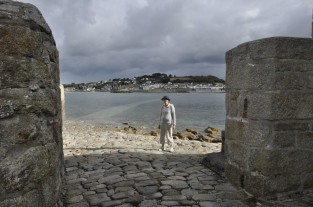 St Michael’s Mount (the Cornish equivalent of Mont Saint-Michel in Normandy, although not quite so grand perhaps) was originally home to a 12th century priory, and there is evidence of human occupation over several thousand years. It has a rich history.  It became the home of the St Aubyn family in the late 17th century, and the family continues to occupy the Victorian wing. in the 19th century there was a village and thriving community of several hundred residents living below the castle.

A visit to St Michael’s Mount includes not only a tour of the house, and its magnificent views over Mount’s Bay, but the gardens below the castle that have been built into and cling to the cliff face. We were told by our boatman that the four resident gardeners are also qualified abseilers! It’s quite a steep climb up to the castle, but well worth the effort. 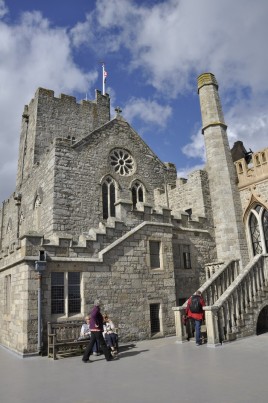 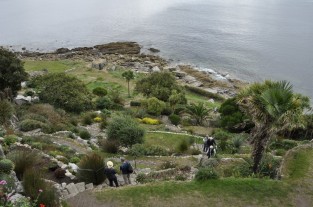 By the time the causeway had opened and hundreds of visitors were pouring across, access to the house was becoming difficult. We had made the tour earlier, and even then passing the narrow entrance caused significant tailbacks. 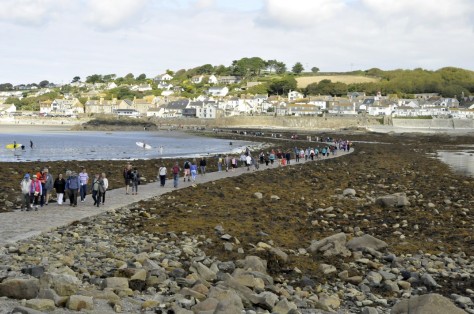 Nevertheless, no visit to Cornwall would be complete without a visit to St Michael’s Mount. Its inaccessibility for half of the day just adds to its attraction. Check out more photos of the interiors and gardens here.

Lanhydrock, just a mile or so off the A30 near Bodmin) is special for two reasons: so many of the rooms (>50) are open to the public, and the Long Gallery in the north wing) and its magnificent 17th century plastered ceiling survived the 1881 fire that gutted most of the rest of house. The house is U-shaped; an east wing was demolished in the 18th century. It has been the family home of the Robartes for four centuries. 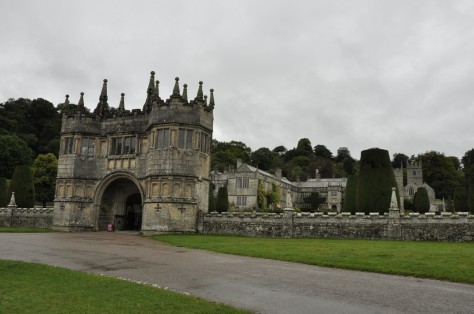 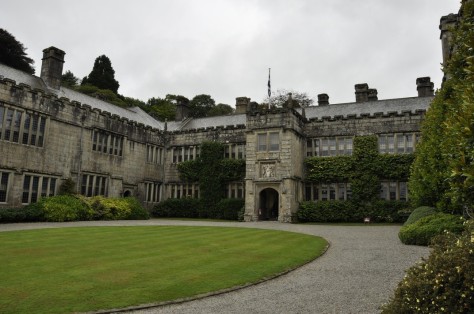 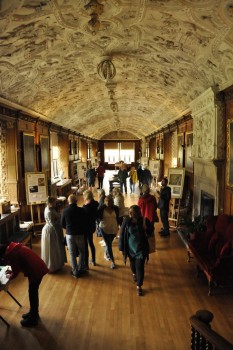 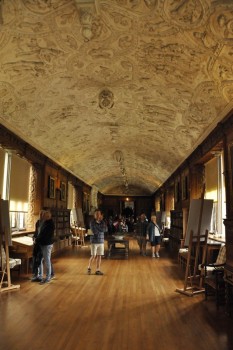 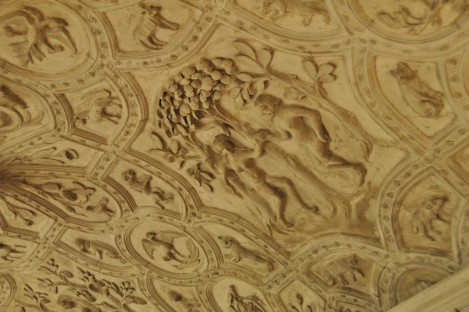 The weather for our visit was overcast with a little drizzle. As we wanted to visit Restormel Castle in nearby Lostwithiel later in the day, we decided to forego a walk around the park, just viewing the gardens and parterre close to the house. 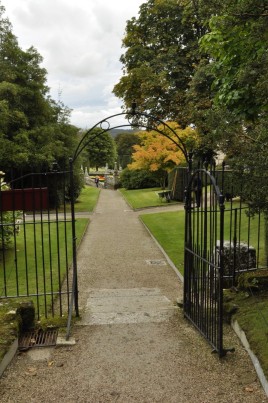 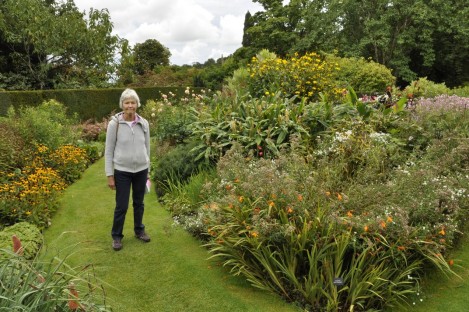 You can take a virtual tour of the house and gardens here. There’s no doubt that Lanhydrock is one of the National Trust’s ‘premier’ properties full of exquisite objects that passed to the Trust when it acquired ownership in 1953. Definitely one of the properties that should be on everyone’s National Trust bucket list.

The first question I asked one of the volunteers when we arrived at Cotehele House was how to pronounce ‘Cotehele’. It’s ‘cot-eel’ apparently.

And it’s also one of the National Trust gems, having so many exquisite tapestries on display. The house dates from the late 15th century but then had 16th century Tudor additions, and is built I guess from local granite, a lovely soft grey color. It was the home of the Edgcumbe family. Passing through a small courtyard, you enter the Great Hall, on to the chapel, and up to the treasures of the first floor and above. 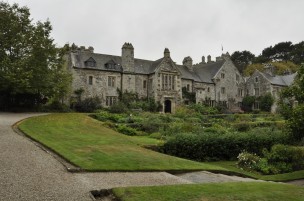 Cotehele has terraced gardens beside the house, and others slightly further away. The Valley Garden follows a steep-sided valley from the terraces to the River Tamar, and Cotehele Quay and Mill. 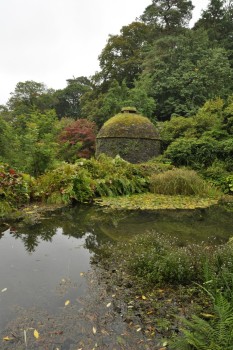 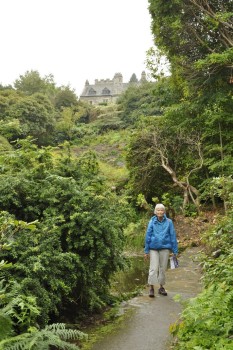 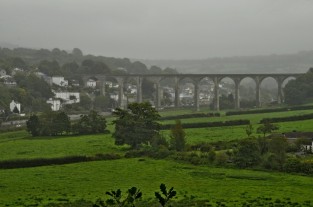 Have a look at more Cotehele treasures here.

Trerice is an Elizabethan, 16th century manor situated a few miles inland from Newquay on Cornwall’s north coast. We visited this delightful house on our last day in Cornwall, on the way back to our holiday home after a visit to Tintagel Castle. 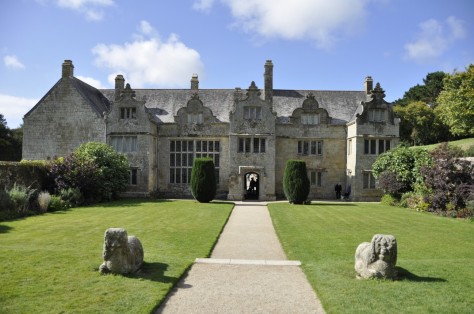 The Arundell family inherited Trerice more than 700 years ago. It passed to the Aclands in the late 17th century. In the 20th century, the Elton family took on a lease from the National Trust and carried out some major refurbishments, including replacing the roof.

There is some particularly smart plasterwork in several rooms, as well as impressive oil paintings. 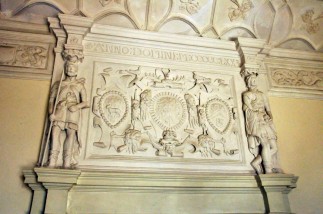 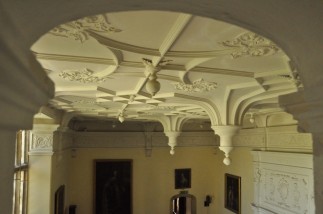 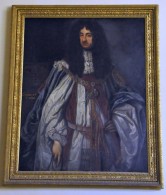 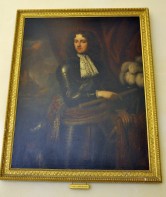 Outside there is an attractive knot garden, and other horticultural attractions like a 1km mowhay. 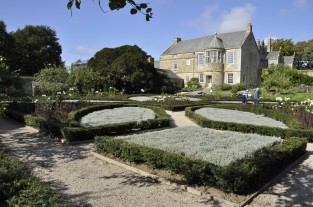 An archaeological dig was underway behind the house on the day of our visit. 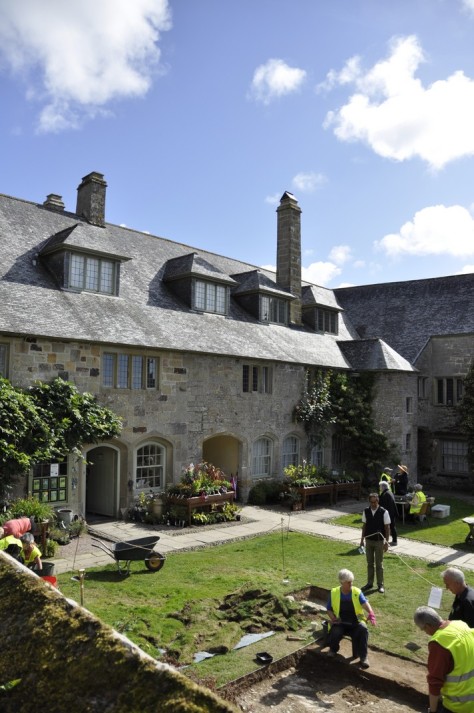 More photographs of this dig and exterior/interior views of the house are available in this album.

These are the other four stories in this Cornwall series:

Kernow a’gas dynergh – Welcome to Cornwall (1): The journey south . . . and back

Kernow a’gas dynergh – Welcome to Cornwall (3): Stepping back in time

Flash photography is not permitted inside National Trust properties, so that means shooting with the slowest speed I can get away with, since all my photos are hand held. Often I’m shooting as slow as 1/15, and 3200 ASA. All the interiors at these four properties were photographed in this way. It’s remarkable how the colors of the tapestries at Cotehele, for example, are revealed. I’m getting quite the dab hand at holding my breath as I’m about to press the shutter.