Hindsight is a wonderful thing.

Over many years I have traveled to more than 60 countries around the world (marked in grey on the map below).

And difficulty in communication was rarely a problem as so many people spoke English; in many cases exceptionally fluently, in others sufficient to get by. The ability of so many having English as a second (or third) language puts us native English speakers to shame. As linguists, we Brits do not excel.

Not so long ago, I watched with embarrassment as Master Chef presenter Greg Wallace tried to communicate with the manager of the world’s largest pasta factory in Italy in a TV program. This person did not speak much English, but had sufficient to explain—slowly—the various processes and stages in making pasta. That was really fascinating, but spoiled by Wallace demonstrating what a condescending ‘personality’ he is: speaking to his interviewee in a strange, broken accent, and ratcheting up the volume of his speech as though that would make understanding his questions and comments any easier. I don’t recall if he waved his arms about. It was almost Monty Pythonesque.

When I began high school in September 1960 I was immediately faced with learning two new languages: French and Latin. And we had formal lessons, examinations even, in English Language. On reflection, I wish I had given more effort to learning French. There were no other language opportunities at my school.

It was only when I moved to Peru in January 1973, and then on to Costa Rica in 1976 (I lived in Latin America for a little over eight years) that my deficiencies as a linguist were immediately apparent. I hadn’t had much aptitude nor interest until I was faced with the necessity of learning a new language—Spanish—just to survive.

And what a difference that made. Within a few months I’d become relatively fluent in Spanish, although I never did really master writing in that language. Being a good Anglo-Saxon, I always found it hard to express myself in Spanish in just a few words when many more was the accepted style.

Since I left Latin America in March 1981, I’ve not had much opportunity to speak Spanish. It’s rather rusty, although from time to time, I find myself thinking (ven talking to myself) in Spanish; my reading ability has not deserted me.

Learning a new language was indeed one of the principal legacies I took from the years I spent in the Americas. However, when I moved to the Philippines in 1991 (remaining there for the next 19 years) I never did pick up any Tagalog, apart from a few words here and there, although I could, on occasion, ‘follow’ a conversation among my Filipino colleagues.

As I said, hindsight is a wonderful thing, and I think, as a nation, we’d be in a better position were we to have much better language skills. In the context of our (deteriorating) relations with the other members of the European Union, we might be in a better place if some of our politicians were better versed in the languages (and cultures) of our co-members.

How times are changing. Teaching of foreign languages is in serious decline in our schools. Last April, an article appeared in The Guardian describing schemes, funded by foreign governments, to teach languages in primary schools in the UK. Without that support, many schools would be unable to provide any language teaching whatsoever. That’s another sign of how support for education throughout the country has changed in recent years, not only in the amounts allocated, but also in the emphasis that the government has been promoting away from languages, humanities, and the like in favor of the so-called STEM subjects: Science, Technology, Engineering, and Maths.

The government seems hell bent on promoting a ‘core curriculum’ of ‘hard’ subjects in science and maths, almost it seems to the exclusion of all those other subjects that give someone a well-rounded education. Even subjects like history and geography are becoming optional. But the arts and humanities make us more rounded individuals. This, from Kurt Vonnegut, is apt: 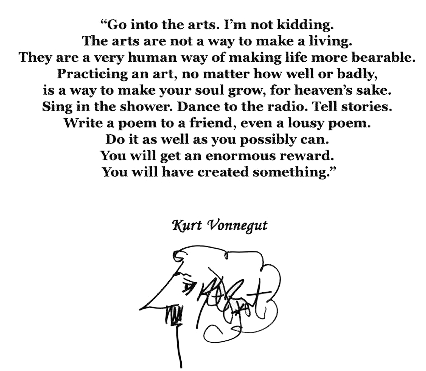 One thought on “Parlez vous?”