Is it just me? The older I get (I’ll be 71 one month from now) the faster time seems to fly by.

This came home to me quite vividly yesterday morning. Ever since we’ve been married (46 years now) Steph and I enjoy an early morning cup of tea in bed. It’s my job to make the tea from Monday to Friday, Steph’s at the weekend. Anyway, after we were up and dressed, I was about to go downstairs for breakfast carrying the tea tray, and not bothering to turn on the light, even though it’s quite dark these days at 07:15.

I had to stop and tell myself that it would be foolish to slip in the dark and damage my leg as I did in January 2016 when I fell and broke my leg. Then reality hit home. It’s almost four years since my accident. Four years! Where has the time gone?

Notwithstanding that I was very busy in those four years, it seems just like yesterday that I was whisked away by ambulance to the local hospital.

And I got to thinking about things past and present. Through social media and this blog I’ve made contact with a number of friends from school days and university. I haven’t met any of my Southampton University classmates since we graduated almost 50 years ago in July 1970.

In my mind’s eye they are still the same, even though I have aged. Does anyone else have the same issue?

1968 – at the end of a botany field course on the west coast of Ireland at Lisdoonvarna. 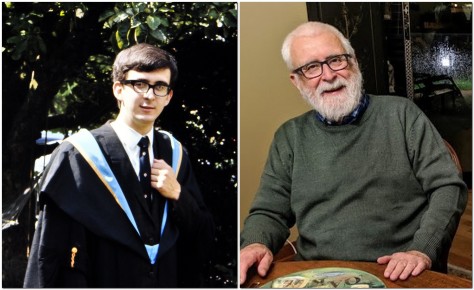 There are so many memories from those years, still fresh in my mind. What did I do last week? Heaven knows.

But I was taken back to my university days recently when I received something the university alumni office. It was a Map of the Tracks, on which alumni memories (and music tracks associated with those memories) were posted.

That got me thinking. I didn’t go to many live concerts. But three stick in my mind. In January 1968, Pink Floyd supported T. Rex. On another occasion, the Alan Price Set played the Students’ Union. Alan Price had played keyboards with The Animals.

But the concert that is most vivid in my mind was late 1967 or early 1968. Or was it later in 1968 at the beginning of the new academic year? Nevertheless, I’m inclined to recall it was during Freshers’ Week in October 1967, just as I started at Southampton.

So who has stayed in my mind all these years? The Crazy World of Arthur Brown! He performed what would become their hit Fire that did well on both sides of the Atlantic after its release in June 1968.

What a performance! Brown came on stage with this contraption on his head, shooting flames, and it wasn’t long before his hair caught fire. Quickly doused (this wasn’t the first time that this happened, apparently) the performance continued. What a night.

Here he is in all his pyrotechnic glory.

3 thoughts on “Perception is truth”