It was July 1979. I was in Santiago de Chile for a few days, as a member of a three person team from the International Potato Center (CIP) to undertake a short review of the Chilean National Potato Program.

Joining me were my Lima-based colleagues, potato breeder Dr Nelson Estrada (a Colombian national) and Regional Representative for South America, Dr Oscar Malamud (from Argentina). I’d flown in from Costa Rica where I was leading CIP’s Regional Program for Mexico, Central America and the Caribbean at the time..

It was a chilly evening, maybe 5ºC, mid-winter in Chile; Santiago lies at 33ºS. Street vendors were roasting chestnuts on open fires. We were out and about doing some tourist shopping (in my case) or buying beef to carry back to Lima (Nelson and Oscar) in spare suitcases, as there was a meat shortage and rationing in Peru in those days.

Then, as I wondered among the shops and market stalls, I heard this song floating over the hubbub of the street:

Chiquitita, tell me what’s wrong
You’re enchained by your own sorrow
In your eyes there is no hope for tomorrow
How I hate to see you like this
There is no way you can deny it
I can see that you’re oh so sad, so quiet 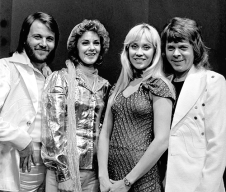 It was ABBA, of course, and this song, Chiquitita, immediately had an impact on me. It was released as the first single from their album Voulez-Vous in January that year. But I’d not heard it until then.

Here are ABBA performing (but lip-synching) the song at the Music for UNICEF Concert that same year, after which the group donated half of the royalties to UNICEF. Being one of ABBA’s most successful recordings, those royalties must have been quite significant.

I’m not sure why, but I hadn’t really been much aware of ABBA before encountering them on that Santiago street, so to speak. I was living in Peru in 1974 when they won the Eurovision Song Contest, with Waterloo. And, never having been a Eurovision fan, and because it didn’t figure in any news that I heard in Lima, their win passed me by. Neither was glam rock my thing. I came late to the ABBA party.

Anyway, after my Chiquitita experience, I went out and purchased a vinyl copy of Voulez-Vous the next time I passed through Miami, and thereafter enjoyed dancing around the living room back home in Costa Rica with my young daughter Hannah (then approaching two) to the many excellent songs that featured on that album, such as I Have A Dream, Angeleyes, Does Your Mother Know, and Kisses of Fire.

It wasn’t until I returned to the UK in 1981 that I really became an signed-up ABBA fan, and got hold of cassette tapes of some of their albums like Arrival (later replaced by CDs of Gold and Greatest Hits Vol. 2 when I moved to the Philippines in 1991).

In early 1982, I accompanied a group of my MSc students in plant genetic resources conservation on a two week course in Israel offered by Professors Gideon Ladizinsky and Amos Dinoor at the Hebrew University of Jerusalem in Rehovot near Tel Aviv. I’d taken several cassettes of music to enjoy during the various field trips, and my ABBA tapes were among those. I distinctly remember one of the Birmingham group, a Polish PhD student pulling my leg about my enthusiasm for ABBA’s music. But she did reluctantly have to agree that their music was quite special.

The wonderful melodies and arrangements composed by Benny Andersson and Björn Ulvaeus, the beautiful voices and harmonies between Agnetha Fältskog and Anni-Frid Lyngstad. Just a winning combination all round. So many hits. It’s no wonder that Mamma Mia! was such a hit show (I loved the film—don’t tell anyone; I watched it twice on one Emirates flight back to Manila not long after it was released in 2008).

However, having set up Spotify the other day to play through my Amazon Echo Dot and a Bluetooth speaker, I came across the entire ABBA catalogue, and decided to shuffle play the lot. And that’s when I realised that besides the many glorious songs that ABBA released, there were just as many (maybe more), and especially the early tracks, that are simply naff. Awful. I was really rather surprised. It’s no wonder these don’t get too many plays. So let’s forget about those and luxuriate in the many catchy and incredibly well-crafted songs that are their greatest hits.

So I suppose I have to tell you what my favorite ABBA song is. So many to choose from. But the one I keep coming back to is . . . drum roll:

It was released on The Visitors album in 1981.