The River Dove is a 45 mile long tributary of the River Trent (the third longest river in the UK), and for much of its length is the county boundary between Staffordshire to the west, and Derbyshire to the east (map).

It’s a sparkling trout stream, and was partly the inspiration for The Compleat Angler by Izaak Walton first published in 1653.

The river cuts through the Peak District’s limestone dome to form a series of deep valleys covered in ash woodland, known as dales, of which perhaps the most well known is Dovedale.

Dovedale is a National Nature Reserve; the land is owned by the National Trust, and apparently receives a million visitors a year, so you can imagine just how crowded it might become at the height of the summer tourist season. But not in these Covid-19 days, regrettably.

The entrance to Dovedale from the south, with Thorpe Cloud on the right.

I grew up in Leek in North Staffordshire, just 14 miles to the west of Dovedale (about 25 minutes by car). My paternal grandparents, Tom and Alice Jackson, lived in the Derbyshire village of Hollington, just 10 miles south of Dovedale, between Ashbourne and Derby.

Dovedale was the destination for many family outings when I was growing up in the early 1950s. I was born in November 1948, so these two photos below must have been taken around 1952 or 1953. 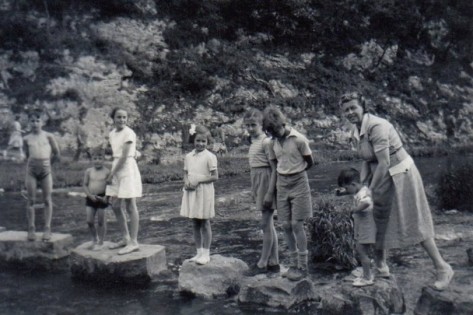 Crossing Dovedale’s famous Stepping Stones, with L-R: my eldest brother Martin, my elder brother Edgar, my cousin Marion, ??, my sister Margaret, my cousin Alec, me, and my mother Lilian Jackson

With my father, Fred Jackson, my brothers Edgar and Martin, and sister Margaret. I remember sailing those yachts. 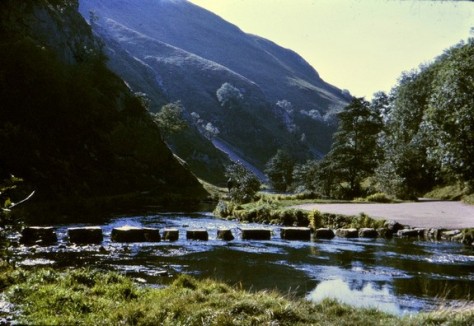 Looking south along the River Dove at the Stepping Stones.

My wife Steph is from Essex (to the east of London) and had never visited Dovedale until she moved to Birmingham in 1971. After we returned from South America in 1981 and set up home in Worcestershire, we took our daughters Hannah and Philippa on several occasions to enjoy the beauty that is Dovedale, the last visit being in July 2006.

Steph on the Stepping Stones

Steph and Phil beside the river just before ascending Thorp Cloud

Steph on the summit of Thorpe Cloud 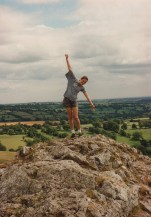 Philippa on the summit of Thorpe Cloud

Looking north along Dovedale from the Stepping Stones 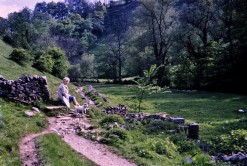 My mother, Lilian Jackson and our Jack Russell terrier, Chem 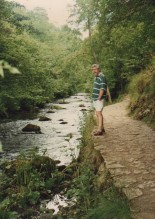 Steph coming down from the summit of Thorpe Cloud

View north along Dovedale from the summit of Thorpe Cloud 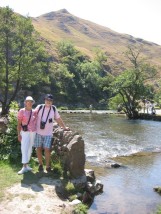 Me and Steph near the Stepping Stones

Footpath up to Thorpe Cloud

The entrance to Dovedale, and Thorpe Cloud

The view south beyond the entrance to dDovedale. 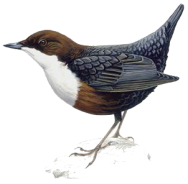 My sister Margaret had friends who farmed land near Alstonefield just above Dovedale. When I was in my mid-teens (around 1964, I guess) a friend of mine and I camped for a week on that farm, and enjoyed many excursions over the lip of the valley into Dovedale. And, being in those days a keen birdwatcher, I saw for the first time (but few times since) the iconic bird of Dovedale: the dipper.

It’s a remarkable little bird, and feeds underwater, scurrying along the riverbed in search of crustaceans and the like. I came across this video showing a dipper feeding in mid-stream.

The limestone landscape of the Derbyshire dales is striking, and botanically very interesting. In 1970, after I had graduated (in geography and botany) from the University of Southampton, for a few days I assisted my friend John Rodwell (now Professor, who was a graduate student studying for his PhD under renowned plant ecologist Joyce Lambert) in his field work in Cressbrook Dale, about 18 miles north of Dovedale. It’s part of the same geological formation, and the botany is similar.