I seem to have stirred up a bit of a geospatial controversy among family members. Nothing too serious, I hasten to add. Just a question of numbers or words. It’s all about finding your place in this world. Literally!

For as long as humans have been exploring this glorious world of ours, they have been drawing maps of one sort or another to enable others to travel safely and understand better the relationship and location of natural and man-made features in the landscape. 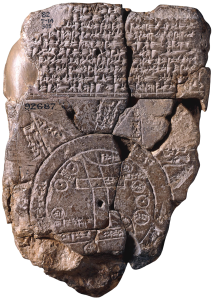 This Babylonian world map, known as the Imago Mundi, is (so I’m led to believe) the earliest known map, over 2600 years old.

This quotation, from film maker Peter Greenaway, perfectly sums up my decades-long interest in maps: ‘I’ve always been fascinated by maps and cartography. A map tells you where you’ve been, where you are, and where you’re going — in a sense it’s three tenses in one.’

And it never ceases to amaze me just how early on map makers were producing realistic maps of the world, centuries before satellite and space imagery showed us the world in the round. Here’s a map of the world, engraved in 1595 by the son of Gerardus Mercator (1512-1594)—the man who (according to Nicholas Crane) mapped the planet.

The 18th century was an era when expeditions, many commissioned by the British Admiralty, were sent all over the world to explore and map distant lands.

As a small boy, I used to spend hours pouring over maps, especially the map of South America. It then became my ambition to visit that enigmatic continent one day. An ambition fulfilled in the 1970s.

Maps have also been an important part of my work as a research botanist. I’ve had a special interest in the geographical variation displayed by plant species, visualizing the data on maps to better understand how variation patterns correlate with geography and ecology.

The two maps below are taken from a paper by a graduate student of mine, Javier Francisco-Ortega, who undertook a study of an endemic legume species, Chamaecytisus proliferus (commonly known as tagasaste or escobon) from his native Canary Islands. Using these hand-drawn maps, based on actual Global Positioning System (GPS) location data recorded in the field, and adding symbols to represent slightly different morphologies, Javier was able to characterize how the species varied according to ecology across the archipelago, and published his findings in this paper.

Even this was a leap forward from when I completed my PhD in 1975. I had studied a particular type of potato from Peru and had collected some of these myself during three collecting missions in 1973 and 1974. Others I had selected from the large collection of native varieties that were being carefully conserved at the International Potato Center (CIP) in Lima. There was no GPS in those days, and we struggled even to source accurate maps, the only ones available (with some difficulty) from the Peruvian military geographical institute (now the Instituto Geográfico Nacional). So it was sometimes difficult to accurately pinpoint where any variety had been collected, and even more so retroactively for varieties already collected. Often it was a case of describing the collection site or farmer’s field as ‘along road such and such from X to Y, W meters north of Z feature in the landscape‘.

Few countries have a mapped landscape as accurate and comprehensive as the United Kingdom, published by the Ordnance Survey that commenced its work in 1791 (although military mapping had already been ongoing for the previous four decades).

Lack of accurate geographical data bedevils the efficient collection, conservation, and use of genetic resources of crops and their wild relatives. It is not uncommon for collecting data to be wildly inaccurate. Transcribing coordinates derived from a map (where they are available) can place a collecting site miles from its actual location. Even in the middle of the ocean!

Using precise location data, a Geographical Information System (or GIS) can link all manner of information and has revolutionized just how we look at the landscape around us, to make maps that communicate, perform analysis, share information, and solve complex problems around the world.

So what was the controversy I referred to at the outset. Recently, I have been posting on Facebook a series of photographs taken at different locations around the world, and challenging those in my circle of friends to guess where. The next day I publish the location, and have taken to using location data from the what3words (or w3w) app that divides the globe into 3x3m squares and generates three random words to describe each square (taking care to screen out any ‘rude’ ones). It works in multiple languages. The reference I give represents where (approximately) I took the photo, or maybe is slap bang in the middle of the feature I’m illustrating.

Much to the exasperation of my nephew Bruce, a GIS professional, who slated w3w as ‘the bane of the geospatial community’. He had responded after I’d posted this lovely photo of the Aqueduto do Convento de Cristo – Troço Pegões Altos, in central Portugal near where his father (and my eldest brother) resides.

And giving it the w3w coordinates of:  ///mischievous.wands.reassign

As Bruce further commented, ‘There’s a lot of interest in What 3 Words at the moment’. But he went to tell me that he and others in his profession were sceptical about the service, particularly the claims that it could be a life saver in emergency situations. And then he explained a couple of things that I wasn’t aware of. And, I suspect, the same applies to the majority of phone users:

Bruce attached a link to an opinion piece about the shortcomings of w3w by GIS guru Steve Feldman in his blog. You can read it here.

Notwithstanding the actual lack of necessity for an app like w3w (I take all that on board), and the concern among GIS professionals questioning the aims of w3w, I do think it has a value. If it raises an interest in locational information, a greater awareness of the world around us among the majority who are GPS/GIS illiterate, then that’s surely a good thing. From my many decades in science research and communications, there’s one thing I have learned. And that is to make science accessible to everyone, not just those working in the field. What w3w does, in a fun way, is bring geospatial information to Joe Public.

There’s also another reason why I’ll continue to use w3w in a limited way. Given that I can hardly remember what I had for dinner last night, trying to remember or repeat a string of numbers, positive and negative location coordinates, is quite a challenge. I have a much easier time with words, and three seems quite a handy number.

So to conclude, here is a location that is a particularly significant to me: ///loose.noises.dream. Clue: 18 November 1948.