As Director for Program Planning and Communications (DPPC, from 2001 until my retirement in 2010) at the International Rice Research Institute (IRRI), I managed the institute’s portfolio of research projects, reporting back to donor agencies on progress and outcomes, such as the UK’s DFID, USAID in the USA, or the SDC in Switzerland, to mention just three. And working with them to ensure continued financial support to the institute each year.

On a rolling basis, I tried to meet officials from these agencies on their home turf, so to speak, and would coordinate several meetings in a single trip. I often scheduled meetings with European donor agencies when I was back on leave in the UK each year. And this was the case in early July 2003 when I visited Portugal (Lisbon) and Spain (Madrid).

At that time, one of my IRRI colleagues, Dr Swapan Datta, had a joint research project with Professor M. Margarida Oliveira of the Instituto de Tecnologia Química e Biológica António Xavier (ITQB), a scientific research and advanced training institute of the Universidade NOVA de Lisboa in Portugal. One of her students, Marta Vasconcelos, worked on rice biofortification with ferritin in Datta’s lab. Another, Sónia Negrão, worked with IRRI’s plant breeders for part of her PhD study, and held a post-doctoral fellowship at IRRI as well.

On the beach at Oeiras close to ITQB, with Margarida, Marta, and Sonia (in the left image) and Sonia and Marta (right).

Prof. Oliveira and I visited the Portuguese overseas aid agency to seek funding for joint rice projects. Portugal, at that time, provided only a small amount of funding (if any—I don’t remember the details) to IRRI. I also got to see some rice growing at the ITQB experiment station.

During the visit to ITQB, I gave a seminar about the genetic resources of rice and, with the donor visit, most of my second day in Lisbon was quite full. But, as was often the case in visits to donor capitals, there also was an opportunity for some sight-seeing.

I had arrived to Lisbon the day before, in the early afternoon. After settling into the Hotel Lutécia in the Areeiro district (map), north of the city center, I decided to see what Lisbon had to offer and took the metro to the city center, about a 20 minute ride from the Roma-Areeiro station to the Baixa-Chiado station.

Lisbon is a lovely maze of narrow streets, and large open plazas. One thing that immediately struck me, especially from the heights of the Castelo de S. Jorge, were the orange tile roofs of all the houses spread over the surrounding hills, and the views over the Tagus River, and west to the expanses of the Atlantic Ocean.

Anyway, I made my way from the metro, south along Rua Agustina (mostly traffic free) full of designer shops and cafes and restaurants towards the Praça de Comércio.

And although I’d intended to carry on walking around the city, I did something I’d never done before. Seeing a line of double-decker open top buses to one side of the plaza, I decided to take a city tour. Having only a short time in Lisbon I realized this would be the best way of seeing much of the city.

The tour lasted about two hours, and I certainly saw many of the important sites, some of which I went back to explore on foot afterwards.

The tour took in: Praça da Figueira; Praça D. Pedro IV; Praça da Restauradores; Av. da Liberdade; Praça do Marquês de Pombal; the view down to the coast from the Alameda Cardeal Cerejeira; west to the Torre de Belém; and back to the city center via the Praça do Império and the magnificent Mosteiro dos Jerónimos, passing under the impressive  Ponte 25 de Abril over the Tagus. 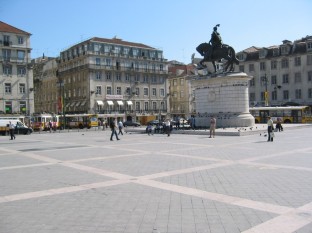 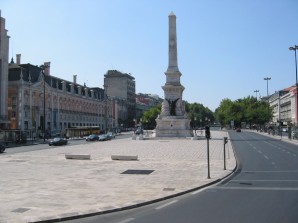 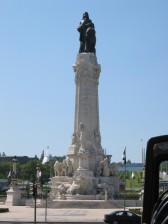 View down to the coast from the Alameda Cardeal Cerejeira 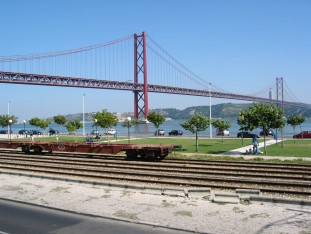 Although it was getting on in the afternoon, I decided to walk up to the Castelo de S. Jorge and enjoy the views over the city.

Castelo de S. Jorge from Praça da Figueira (L) and the plaza from the castle (R). 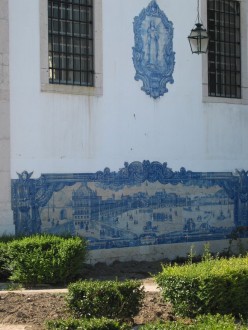 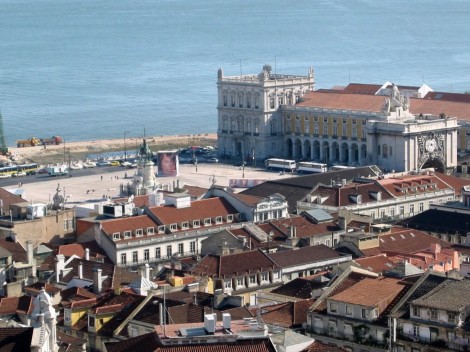 Praça de Comércio from the castle

Then, it was back down to enjoy a beer or three and a dish of bacalhau (a typical dish of cod), before heading back to my hotel.

On the second evening I decided to stay near my hotel, write up my notes, and get ready for a mid-morning departure to Madrid the following day.

I had just a couple of nights in Madrid. I’d been through the city’s airport in 1981 on my way to the Canary Islands. That was in June, and I remember stepping outside the airport terminal building to experience the heat. It was over 40ºC. Now, I’d lived in the tropics for over eight years up till then, but I’d never experienced heat like that.

In July 2003 it was pretty hot as well. I arrived mid-afternoon on my flight from Lisbon. I was booked into a boutique hotel near Real Madrid’s Santiago Bernabéu Stadium. By the time I was settled into my hotel, it was late afternoon, and fortunatley it was cooling down. So I took the metro to the Puerta del Sol plaza.

I wandered along the Calle Mayor, taking in the Plaza Mayor and Plaza de la Villa on my left, on on towards the Catedral de Santa María la Real de la Almudena and the Palacio Real.

Calle Mayor and PLaza Mayor in the distance 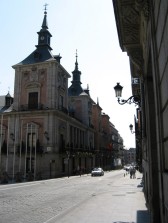 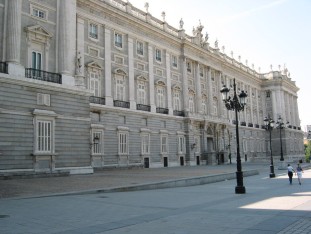 Nearby there was a cafe where I could sit outside and enjoy a cold beer, before I headed back towards the Puerta del Sol plaza to choose a restaurant for my evening meal. Then it was back on the metro to my hotel.

I had meetings the next day, all day at the Instituto Nacional de Investigación y Tecnología Agraria y Alimentaria (INIA) in the Moncloa-Aravaca district, northwest of the city center.

In the evening I chose a small restaurant close to the hotel. Excellent food!

Then, early the next day, it was off to the Madrid-Barajas Adolfo Suárez Airport, and an Iberia flight to Switzerland (Zurich), where I had a meeting in Bern at the SDC. 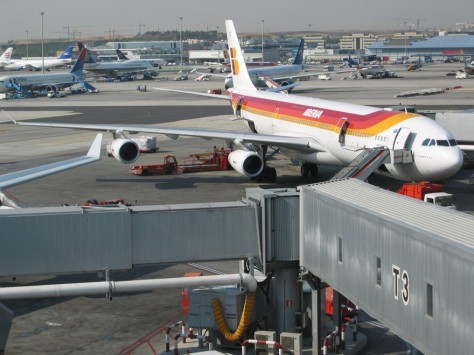 Before heading back to BHX, I visited old friends in The Hague, Gordon and Joan MacNeil. Gordon had been IRRI’s Deputy Director General for Finance, and left the institute in 2002.

All in all, an enjoyable trip, but not very fruitful donor-wise, unfortunately.

In 2012, Steph and I had a short holiday in Portugal, visiting my eldest brother Martin and his wife Pauline who live about 100 km north of Lisbon.