The vandalism began in 1536. The landscape changed. Henry VIII threw his toys out of the pram, and ordered his officials to close down religious houses all over England, in what has become known as The Dissolution of the Monasteries. What had been thriving communities, with some of the most magnificent architecture that this country has ever produced, were sold off, some converted where possible into residences, or simply destroyed.

And much of Henry’s despotic legacy still stands in ruins in many parts of England 500 years later.

Over the past 12 years, we have (as members of the National Trust and English Heritage) visited many of the ruins of once proud, the grand (like Fountains, Rievaulx, and Whitby in North Yorkshire) and not-so-grand monasteries, priories, abbeys, and the like, as well as some small churches and chapels (Langley in Shropshire, St Mary’s at Kempley in Gloucestershire with its magnificent frescoes, or the ancient church of St Clement’s on the southern tip of Harris in the Outer Hebrides) that did survive and continue to serve their communities, some dating back to pre-Norman Saxon times. 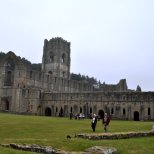 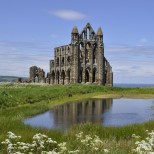 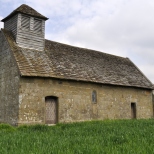 Six of the 12 apostles on the north wall of the chancel., St Mary’s Kempley

Some we made a bee-line for; others we came across quite by chance. All have been inspirational in one way or another, although I should add that I hold no religious beliefs. I am inspired nevertheless by these buildings and how they must have dominated the surrounding landscape during their brief ‘lives’. Many were built in the couple of centuries after the Norman conquest of England in 1066. And I am inspired by the skills of the masons and other craftsmen who created these magnificent buildings.

Just click on any of the icons on the map below to view links to my stories or to photo albums. I’ve also included links to National Trust or English Heritage web pages where available. To open the map in full screen mode in a new tab, click on square icon in the top right hand corner.

One thing you can say, however, is that these religious orders certainly knew where to found their abbeys, monasteries, or priories. Just a few days ago, Steph and I made the short (<18 mile) journey south into County Durham to visit Finchale Priory that stands beside a bend in the River Wear. What a peaceful setting, and you can easily image just how that tranquility made for easy religious contemplation. Something of that spirituality lingers. Quite magic! 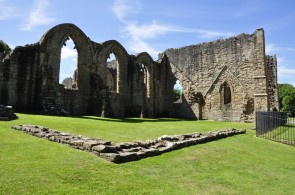