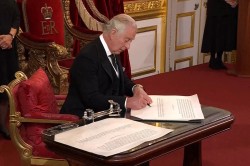 Yesterday, at a Accession Council in St James Palace—broadcast live on television for the first time—Charles III was proclaimed King.

He made a personal declaration about the death of the Queen and an oath to preserve the Church of Scotland—because in Scotland there is a division of powers between church and state.

For anyone interested in ancestry, genealogy, and genetics a simple question remains: Is Charles the true king? And if not, who should be?

The ‘rightful heir’ should have been Michael Edward Abney-Hastings, 14th Earl of Loudon, a British-Australian farmer, now succeeded by his son the 15th earl. The documentary was a bit of fun, and certainly not taken seriously by Abney-Hastings. However, besides this Plantagenet ‘claim’, there are other alternative successions to the crown.

Charles III has an impressive family tree that can be traced back to the time of the Norman Conquest in 1066, and even earlier it seems. Of course the line of descent through each monarch was not always direct, father to son or daughter. Some sovereigns never had children.

The key person in that family tree that links the monarch today with the Plantagenets and earlier is Mary, Queen of Scots (1542-1587). She was the daughter of King James V of Scotland and his French wife Mary of Guise. Her paternal grandmother was Margaret Tudor, elder sister of Henry VIII, and daughter of Henry VII. Henry VII had married Elizabeth of York, daughter of Edward IV, thereby linking the Lancastrian and Yorkist dynasties.

Mary’s son became James VI and I (1566-1625). As we enter a second Carolean Age it’s interesting to note that Charles III is not a direct descendant of Charles I or Charles II, the son and grandson of James.

Charles II (1630-1685) had several bastard sons (who were ennobled) but no legitimate children. However, if and when William, Prince of Wales (and now heir to the British crown) becomes King, there will be a ancestral link back to Charles II through his mother, Diana, Princess of Wales.

After Charles II’s younger brother James II (1633-1701) was deposed in 1688, and to exclude his Catholic heirs from throne, the crown was offered to James’ Protestant elder daughter Mary II and her Dutch husband, William III. They had no children, and in 1702, the crown passed to Mary’s younger sister Anne, who reigned until 1714. It was during Anne’s reign that the Kingdoms of England and Scotland were united into a single nation, Great Britain, under the Acts of Union in 1707.

Anne had 17 pregnancies, but only five live births. None of her children survived to adulthood. So, on her death in 1714, Parliament had a dilemma. It would not support the stronger claim of the hated Catholic Stuarts to the throne, instead turning to George, Elector of Hanover, and great grandson of James VI and I through his second child and eldest daughter, Elizabeth Stuart. George became George I of Great Britain, thus founding the Hanoverian dynasty that lasted until the death of Queen Victoria in 1901.

George I was succeeded in 1727 by his son George II, and in 1760 by his great-grandson George III, who reigned until 1820. George III had fifteen children, some of whom never married, or never had legitimate children. The notorious eldest son became George IV in 1820, and the third son William IV in 1830.

Edward, Duke of Kent and Strathearn

George IV had one daughter who died in childbirth. William IV had a bevy of illegitimate children, none of whom could succeed to the crown.

Once again, the country was faced with a dilemma. The next in line, so to speak, was Edward, Duke of Kent and Strathearn (1767-1820) fifth child and fourth son of George III. He married Princess Victoria of Saxe-Coburg-Saalfeld (1786-1861) and they had one child—a daughter—born in 1819 who succeeded to the crown in 1837 (on the death of her uncle William IV) as Queen Victoria (1819-1901). Edward, Duke of Kent died less than a year after Victoria’s birth.

But was he Victoria’s father? And this is where the story becomes really interesting, and genetics comes into play.

Victoria and her husband Prince Albert of Saxe-Coburg and Gotha had nine children, several of whom married into the royal houses of Europe.

Albert, Victoria and their nine children in 1857.

And they took with them a deadly genetic disorder: haemophilia, the ‘bleeding disease’. Queen Victoria was a carrier of the haemophilia gene, but before her there was (apparently) no record of the disorder among the Hanoverians or the families they united with through marriage.

Victoria and Albert’s eighth child and third son, Leopold, Duke of Albany was a haemophiliac. He married Princess Helen of Waldeck and Pyrmont; they had a non-haemophiliac boy and a carrier girl. The tragedy of the gene in the Russian Imperial Family is well known.

So where did the haemophilia mutation arise? How had Victoria become a carrier? The gene is carried on the X chromosome. Here’s a simple diagram to explain the genetics.

Well, there are two answers. Either, as distinguished geneticist Professor Steve Jones FRS has so eloquently put it (writing in The Telegraph in May 2011), a mutation of the blood-clotting disease haemophilia . . . originated in the elderly and august testicles of Edward, Duke of Kent; or Edward was not Victoria’s father. If so, then Victoria’s mother, the Duchess of Kent, had a haemophiliac lover, and Victoria was their illegitimate offspring.

Supposition, of course, but still a genetic mystery. DNA tests could solve the mystery, but that would require a comparison of Queen Victoria’s DNA with that of a confirmed relative of George III (or close relative). Just as was achieved when the late Prince Philip’s DNA was used to confirm the remains of the last Tsar of Russia and his family. And testing the DNA of a descendant of the sister of King Richard III to confirm the identity of the skeleton found under a car park in Leicester.

If a match was not found, what should have been the succession? Presumably the younger brother of the Duke of Kent, Ernest Augustus, King of Hanover and his descendants. However, these German descendants were deprived of their peerages and honors for having sided with Germany in the First World War.

Charles III was confirmed as King of Great Britain and Northern Ireland, fourteen other countries, and a host of territories. Should he be? It remains one of the intriguing ‘what ifs’ of British royal history.