A sweet crisp
During the late 1980s, when I was on the faculty of the University of Birmingham, my colleague, Brian Ford-Lloyd (now Emeritus Professor of Conservation

Genetics) and I had a research grant from United Biscuits to work on somaclonal variation in potatoes. Whatever is that? I hear you cry. Well, it’s technique to grow plants from small pieces of plant tissue on sterile nutrient agar (a jelly-like substance), and try and bring about genetic changes which are primarily due to disorganized tissue growth and chromosome changes. The plants thus produced are called somaclones. And our aim was to produce a somaclonal variant of the potato variety Record, which was at that time, one of the most important varieties for producing potato crisps (chips in American parlance).

Now, the main crop of potatoes is harvested in the autumn in the UK, and they are stored at low temperature over many months while stocks last.

But this leads to a problem that is significant for producing good crisps. And that is, low temperature sweetening that is due to the conversion of starch to sugars, such as glucose and fructose. In itself this would not be a particular problem, but when potato slices are deep fried to produce crisps, any that have a relatively high sugar content will caramelize and the crisps themselves will be much darker in colour – even some ‘black bits (although some of these are due to use of diseased potatoes) – which the consumer does not like. The ideal potato crisp should be a light golden colour.

Anyway, our aim was to try and produce a non-sweetening variant of Record. I left Birmingham before the project was completed, but by that time we had sent a number of clones for field testing. I don’t know if any of these ever went into commercial production.

Susan Juned joined the project as a research associate, and successfully went on to complete a PhD based on this work. Since leaving Birmingham, Susan has had a distinguished career in local politics, as a Liberal Democrat councillor for Stratford-on-Avon and Warwickshire County Council. She unsuccessfully contested three parliamentary elections for the Stratford constituency.

Publish and be damned
Since the research was funded by a commercial company, we had to seek approval before we were permitted to publish any of our work. But after a couple of years, everyone agreed that a small story in the university bulletin would be appropriate (in November 1987)  and that’s when some of our headaches began, although in hindsight rather humorous. The story was picked up in the local media, and one afternoon I received a phone call from someone at the BBC asking if I’d like to appear on the breakfast show on national TV the following morning to discuss our work. The editorial assistant wanted some more details, and when it became apparent to her that I was talking about a serious piece of research – and not a wind-up about ‘black crisps’, the BBC dropped the story like the proverbial hot potato.

But it was picked up by the tabloid newspaper, The Sun, one of Murdoch’s publications, notorious for its Page Three girl, always half naked! And that’s where our story was published – just check out the tiny item at the bottom of the page (Crunch time for boffins) right next to Suzanne, who’s apparently ‘a bite of alright‘! 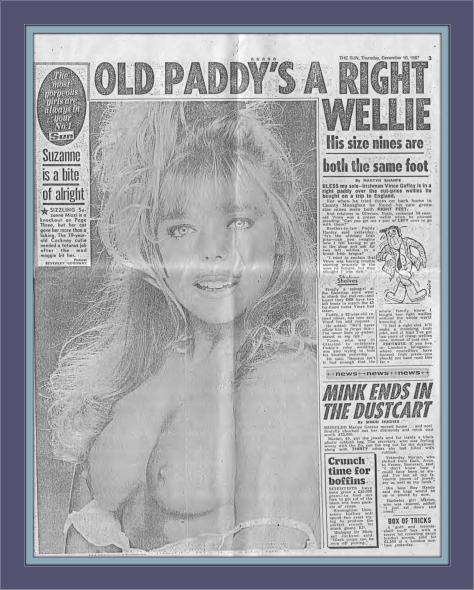 A proper scientific outcome
But the research did have some implications for the tissue culture of plants like potatoes that are produced vegetatively through tubers, and also for their genetic conservation in vitro. We showed that the ability to produce somaclones was not the same in all of the cv. Record tubers we started the research project with, and that the whole process of multiplication of disease-free stocks might be leading to a certain level of genetic change and selection. We published this work in the Annals of Botany [1].