One evening in February 1971 I received a phone call from Professor Jack Hawkes who was head of the Department of Botany at the University of Birmingham, and Course Director for the MSc on Conservation and Utilization of Plant Genetic Resources. I’d begun my studies at Birmingham in September 1970 after graduating some months earlier from the University of Southampton with a BSc in environmental botany and geography. He asked me if I was interested in working in Peru for a year. Well, it had been my ambition for many years to visit Peru, and here was my chance.

Jack was a world-renowned authority on the potato, its taxonomy and origins in the Andes of South America. And on the day that he phoned me, he had just returned from a two month expedition to Bolivia to collect samples of wild potato species. He had been joined on that expedition by his close collaborator from Denmark, Dr Peter Hjerting, and one of his PhD students, Phillip Cribb (who went on to become an orchid expert at the Royal Botanic Gardens – Kew).

The expedition also received logistical support from the North Carolina State University-Peru USAID project, led at that time by Dr Richard Sawyer who would go on to found and become the first Director General of the International Potato Center (CIP) in October 1971.

While in Lima at the start and end of the expedition, Jack has stayed with Richard and his wife Norma. Richard talked of his vision to found CIP, and that he wanted to send a young Peruvian to study on the MSc course at Birmingham. That was Zosimo Huaman, who would go on to complete his PhD with Jack, and stay with CIP for the next 20 or more years. Zosimo was helping to manage a collection of native varieties of potato from Peru that the USAID project had taken over, and which would pass to CIP once that institute was open for business.

But if Zosimo went off to the UK, who would look after the potato collection? Richard asked Jack if he knew of anyone from Birmingham who might be interested in going out to Peru, just for a year, while Zosimo was completing his master’s studies. ‘I think I know just the person’, was Jack’s reply. And that’s how Jack came to phone me that February evening over 40 years ago.

But it wasn’t quite that simple.

There was the question of funding to support my year-long appointment, and Richard Sawyer was hoping that the British government, through the then Overseas Development Administration (now the Department for International Development – DfID) might cough up the support. The intention was for me to complete my MSc and fly out to Peru in September 1971. In the event, however, my departure was delayed until January 1973.

By February 1971, an initiative was already under way that would lead to the formation of the Consultative Group on International Agricultural Research (CGIAR) later that same year, and the ODA was contemplating two issues: whether to join the CGIAR, and whether to fund a position at CIP on a bilateral basis, or on a multilateral basis if it became a member of the CGIAR. But that decision would not be made before my expected move to Peru in September.

At what became a pivotal meeting in London in mid-1971, Jack argued – convincingly as it turned out – that he’d identified a suitable candidate, me, to join CIP’s genetic resources program, and that if some funding support was not found quickly, I’d likely find a job elsewhere. And so ODA agreed to support me at Birmingham on a Junior Research Fellowship for 15 months until December 1972, and that if negotiations to join the CGIAR went smoothly, I could expect to join CIP in January 1973. In the interim, Richard Sawyer did come through Birmingham and I had the chance to meet him, and for him to give me the once over. All seemed set for a January 1973 move to Peru, and I settled down to begin a PhD study under Jack’s supervision, working on the group of triploid potatoes known as Solanum x chaucha. 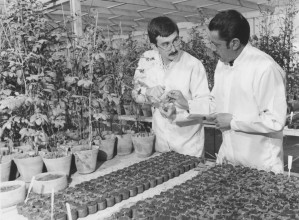 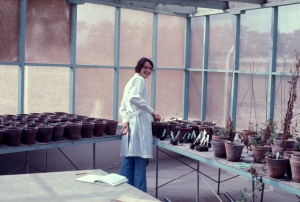 Although I went on to the CIP payroll on 1 January 1973, I didn’t fly out to Peru until the 4th (a Thursday). After spending Christmas with my parents in Leek, then a couple of days in London with my girlfriend Stephanie (who joined me in Peru in July 1973, where we were married in October, and she joined CIP’s staff as well) I spent a couple of nights in Birmingham with Jack and his wife Barbara before we set out on the long journey to Lima.

In those days, the ‘direct’ route to Peru from the UK was with BOAC from London-Heathrow, with three intermediate stops: in St John’s, Antigua in the Caribbean; in Caracas, Venezuela; and finally in Bogotá, Colombia. We finally arrived in Lima late at night, were met at Jorge Chavez airport by plant pathologist Ed French, and whisked off to our respective lodgings: me to the Pension Beech on Los Libertadores in the San Isidro district of Lima, and Jack to stay with the Sawyers. Thus began my association with CIP – for the next eight and a half years (I moved to Costa Rica in April 1976), and with the CGIAR until my retirement in 2010. 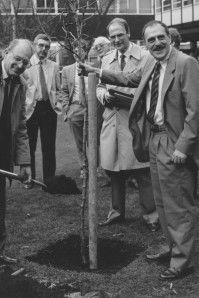 After CIP I returned to the UK to teach at the University of Birmingham. By then, many of the overseas MSc students were being supported by another of the CGIAR institutes, the International Board for Plant Genetic Resources, IBPGR (later to become the International Plant Genetic Resources Institute, IPGRI, then Bioversity International) based in Rome. A former Birmingham faculty member, Dr Trevor Williams (who had supervised my master’s thesis) was the first Director General of IBPGR. I maintained my links with CIP, and for a number of years had a joint research project with it and the Plant Breeding Institute in Cambridge on true potato seed. I also took part in a very detailed project review for CIP in about 1988.

In 1991 I joined the International Rice Research Institute (IRRI) in the Philippines, which was founded in 1960, and is the oldest of the 15 centers that are part of the CGIAR Consortium. I was head of IRRI’s Genetic Resources Center for 10 years, followed by almost nine as Director for Program Planning and Communications.

The CGIAR gave me a great career. I was able to work for excellent scientific research organizations that had noble goals to reduce rural poverty, increase food security, ensure better nutrition and health, and manage resources sustainably. As a small cog in a big wheel it’s hard to fathom what contribution you might be making. But I often thought that if people were going to bed less hungry each night, then we were making a difference. This does not diminish the scale of the continuing problems of poverty and food security problems in the developing world, which are all-too-often exacerbated by civil strife and conflict in some of the most vulnerable societies. Nevertheless, I feel privileged to have played my part, however small. It was my work with the CGIAR that led to my appointment as an OBE by HM The Queen in 2012, for services to international food science.