Botany or banking? Is there really a serious choice? I saw a report last year in which botany graduates received higher initial salaries after graduation than many other professions, ranking third after medicine and dentistry, in the UK. That’s hard to believe really. Bankers might certainly reach for the giddy heights in terms of salary packages (and bonuses) but I’m sure that more botanists go to bed each night with a clearer conscience than bankers. And when was the last time you heard of a botanist being reviled by society at large? Well, perhaps if you are in the GM business . . . ?

Not convinced? Well let me tell you why. There is, however, a small caveat. It might be more appropriate to talk about ‘plant sciences’ in the widest sense, because many of the people I’ve met over the decades who do scientific research on and about plants didn’t necessarily study botany per se at university. I don’t think that diminishes my point, however. In the UK, I don’t think there’s a single botany department any longer in the university sector. They all morphed into ‘plant sciences’ or ‘plant biology’ (supposedly more appealing names) or became part of  biological sciences departments. If you were lucky there might be a ‘plants stream’. Botany appears to be in a healthier position in North America.

Plant scientists, it seems, are in great demand. And the traditional image of a botanist couldn’t be further from reality. Whether employed as molecular biologists, geneticists or biochemists (the distinctions are diminishing by the day), plant or crop physiologists, plant breeders, plant pathologists, ecologists, biodiversity and conservation specialists, or even taxonomists, there’s never been a greater need for people to study plants. After all, life on earth depends on plants. Where would we be if we could not successfully grow the crops needed for survival, to adapt to climate change, to keep one step ahead of evolving pathogens, or simply try and understand this wonderful world of ours and its glorious diversity? 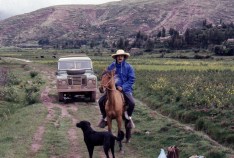 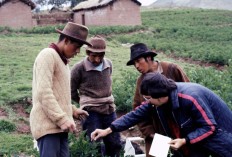 Botany has been my ticket to a successful and fruitful career. It’s taken me to many countries in the Americas, Europe, Africa, Asia, and Oceania over four decades – as plant hunter, researcher, teacher, project manager, and speaker. I worked on two important plant species: potato (Solanum tuberosum) and rice (Oryza sativa) and their wild relatives as a taxonomist, germplasm expert, seed physiologist, agronomist, plant breeder, and plant pathologist. My work has been both lab and field based. What more could I have asked for? And I’ve worked with some inspiring colleagues who came to work on potatoes and rice – and other crops – through one avenue or another, not necessarily as botanists, but perhaps through an interest in and love of plants as part of agriculture. 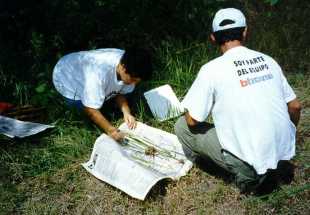 Characterizing a field collection of rice at IRRI

I can’t deny that I have been fortunate – when opportunities arose I was well-placed to take advantage. I studied with some inspiring heavyweights in my chosen fields. But a love and study of plants has made me a happy person – on the whole.

I was out and about yesterday on one of my daily walks. It was a beautiful day, Spring was definitely in the air (at last), and the hedgerows were creeping back into life. In one spot, the bedstraws (Galium spp.) were in their first flush of new growth,  profusely spreading over the bank beside the road, and responding to milder days we have begun to experience recently (in any case it really has been a mild winter). And it was that sight that made me think back to my student days in the late 60s as an undergraduate at Southampton University. There were times when I did wonder if I’d ever use again some of things we were taught and how relevant they might become – like plant anatomy, for example. It’s interesting to know how important anatomy studies have become in the search for and development of a C4 rice to make its photosynthesis more efficient. Researchers at IRRI have studied the leaf anatomy of hundreds of samples of wild rice species, since C4 photosynthesis in plants is associated with the specialized Kranz anatomy.

As an undergraduate I took several plant ecology courses with Dr Joyce ‘Blossom’ Lambert who had worked on and discovered the origin of the Norfolk Broads in East Anglia, UK – not as natural lakes but flooded peat diggings abandoned by the 14th century. But once I’d discovered the ‘link’ between ecology and genetics, I was hooked, and that led to my focus on the conservation and use of plant genetic resources. The rest, as they say, is history . . .

One thought on “Study botany and the world’s your oyster . . .”