We’ve had a mixed summer, weather-wise, here in the UK. For the past month we’ve endured lower than average temperatures even though it’s supposed to be mid-summer. Some mornings it feels as though autumn has arrived six weeks early. The mixed weather we ‘enjoyed’ during our road trip around Scotland at the end of May and early June seems, in retrospect, quite good in comparison.

Fair weather days may be few and far between as autumn begins to encroach, so Steph and I are taking advantage of every good weather opportunity to get out and about. Last week, we traveled to Hardwick Hall in Derbyshire, a round trip of about 177 miles. So I wasn’t particularly inclined to take on a long journey for our outing yesterday.

We are fortunate that there are many interesting places to visit that are not too far from our home in northeast Worcestershire. With that in mind we headed northwest yesterday to visit two heritage sites in Shropshire’s beautiful landscape (map). And one of them really is part of a UNESCO World Heritage Site. One of them reaches back more than a thousand years, the other a mere 236 years. One is a ruin (almost) deliberately destroyed during the reign of Henry VIII in 1540. The other is a celebration of engineering ingenuity in the ‘home of the Industrial Revolution’.

Of course I’m referring to Wenlock Priory (in the small town of Much Wenlock, and incidentally the birthplace of the modern Olympic Games), and the world’s first bridge constructed of cast iron in the aptly named village of Ironbridge on the banks of England’s longest river, the River Severn. And both, in their different ways, are superb examples of architecture and construction. 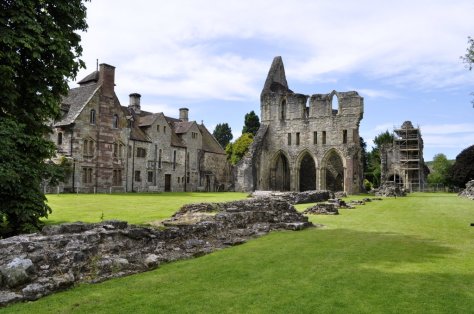 Remains of the church and monks’ residence at Wenlock Priory. The building on the left is now a private residence, and was not destroyed during the Dissolution of the Monasteries in the sixteenth centruy under Henry VIII.

The iron bridge at Ironbridge, constructed in 1779, and now a UNESCO World Heritage Site.

Wenlock Priory—or its predecessor—was founded in the seventh century long before the Normans arrived on these shores in 1066 (and all that!). But thereafter it was refounded and expanded as a Cluniac (reformed Benedictine) priory.

From the dimensions of the various building (or parts of) that are still standing, Wenlock Priory must have once been a very impressive complex of buildings. The length of the church and the girth of the bases of the columns that would have held up the roof give testament that Wenlock Priory was once an important ecclesiastical community. Having visited Fountains Abbey, Hailes Abbey

, and viewed Rievaulx Abbey from above, I’m convinced that Wenlock was equally important. These were owned by the Cistercian order. Just a few miles down the road from Wenlock Priory lie the ruins of Cistercian Buildwas Abbey on the banks of the River Severn.

And I never to wonder as I wander around these ruins what they must have been like in their heyday. Busy of course, but also a haven of peace and tranquility I hope, notwithstanding the wealth that these ecclesiastical communities manifested and the power they exerted.

The church, with the Library on the outer wall.

The church and the four great pillars here once supported a tall, square tower.

Detail of the arches on the east side.

View along the nave of the church, eastwards.

The church from the cloister garden. 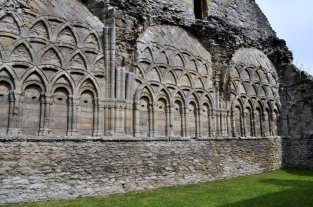 Detail of the walls in the Chapter House.

The Lavabo where monks washed, in a ritual fasjon, beofre each meal.

Detail from the side of the Lavabo.

Tiles on the floor of the West Front (13th century).

Wenlock Priory is privately owned, and part of the originally priory is still occupied as a residence. Obviously these buildings did not suffer at the time of the Dissolution of the Monasteries in 1540. Much of the stone from the priory was taken away and used in the construction of homes and farms in the surrounding countryside. Today, Wenlock Priory is managed by English Heritage.

The iron bridge at Ironbridge is, in my opinion, one of the most elegant ever constructed. And because of its association with the beginnings of the Industrial Revolution in Coalbrookdale, and Abraham Darby and his descendants, it’s even more special. I first visited Ironbridge in 1966 when, as a high school student, I attended a weekend course at nearby Attingham Park about the origins and reclamation of industrial landscapes.

The bridge from the east. 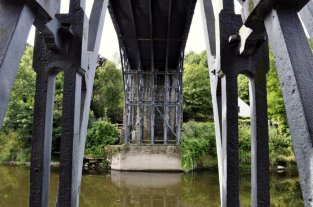 What also makes the iron bridge special, and surely contributing to the World Heritage Site status of the Ironbridge Gorge, is its construction in the manner of a wooden bridge. The span of the bridge high over the River Severn is impressive indeed, and the various struts lock together and are fastened with nuts and bolts. All the iron for the bridge was cast in the nearby furnaces of Coalbrookdale where the art of smelting and production of steel was developed on an industrial scale. 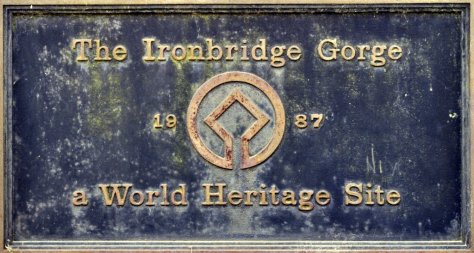 There’s a lot more to explore slightly further afield in Shropshire. Plenty to keep us busy and active members of English Heritage (and the National Trust) for many years to come.