Have you ever been surprised walking through an 18th century landscape? Ha-ha!

Well, you’ve probably come across numerous ha-has without stopping to think what or why?

A ha-ha is a recessed landscape design element that creates a vertical barrier while preserving an uninterrupted view of the landscape beyond. They became very popular in the 18th century, as landscape architects like Capability Brown developed their visions of an open landscape connecting house and surrounding land.

In some ways, they are like a dry moat, built for protection—not against human marauders, but animals. Grazing animals were excluded from the lawns and gardens immediately adjacent to a house. But, with a ha-ha separating this area from the ‘wild’ grazing outside, there was a continuity, a oneness with the surrounding landscape in which a house sat. (Think of an infinity pool as a modern equivalent having the same visual effect).

I first saw a ha-ha when I was a young boy growing up in Leek in North Staffordshire. There’s a good example on one side of the pitch at Leek Cricket Club where my Mum and Dad often took me on a Saturday evening in the summer.

Ha-has are more common than you might think. During our visits to National Trust properties over the past six years, we’ve seen some very good examples. Standing at the entrance of a stately home, gazing out over the landscape, your mind is easily transported back 250 years or so. Magnificent today, what must have been the wonder at these new landscapes in their heyday, and the unlimited vistas that the addition of a ha-ha opened up?

At Hanbury Hall, the National Trust property closest to our home in northeast Worcestershire, from the ha-ha just west of the formal garden and parterre, there is an open view to the northwest, across what must have once been a deer park.

In Herefordshire, a ha-ha separates the lawn in front of the main entrance from the meadows beyond at Berrington Hall.

The ha-ha at Berrington Hall encircles the main entrance to the house, and encloses a lawn and gravel drive. 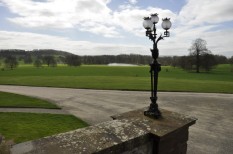 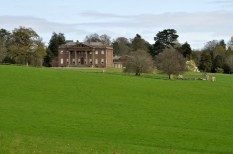 Croome Court is southeast of Worcester, about 20 miles from home. The park at Croome was the first landscape designed by Capability Brown. However, the ha-ha does not separate the land immediately surrounding the house itself, but an area to the west of the house, around the Croome River, about half a mile from the house, where an orangery, a temple and a grotto were built. From the ha-ha there is an uninterrupted view back to the house. 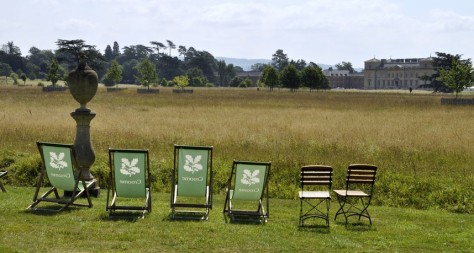 The view from the edge of the ha-ha in front of the Orangery at Croome, looking towards the house 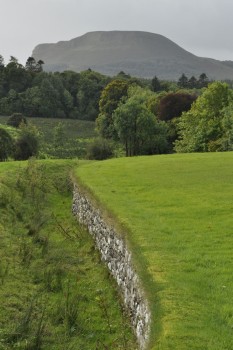 In these two photos, looking across the lawn in front of the house, the edge of the ha-ha can be easily discerned as a slight change in colour of the grass.

Belton House, near Grantham in Lincolnshire, and 100 miles east from home, is a magnificent property. We visited last August. On the east-southeast side of the house, there is a tree-lined avenue and vista to Belmont Tower, about 1 mile away.

Belmont Tower from inside the house. The ha-ha is just beyond the people in between the trees.

Looking back to Belton House from the ha-ha that is about half way to the Belmont Tower.

Just under half way from the house, a curved ha-ha separates the gardens from the park beyond.

Steph standing on the edge of the ha-ha.

I expect there will be many more to find and photograph in the coming years.