When Steph and I moved back to the UK in 1981 from Peru, we had to find somewhere to live that was not too far from Birmingham. I’d been appointed to a Lectureship in the Department of Plant Biology, so needed a base from which to conveniently commute. We’d already decided that we didn’t want to live in Birmingham, so began to look in the area covered by an arc from the west, south and southeast of the city. 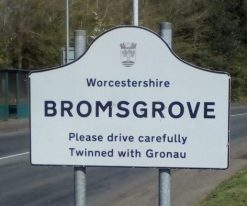 Bromsgrove, some 13 or so miles south of Birmingham, was the first town we visited. It’s a straightforward drive south from the university, and was an obvious first choice. In any case, we’d already seen some property flyers for a couple of properties there that had caught our attention.

And in less than a week we had settled on the house that we bought. And we have ‘lived’ there since July of that year. I say ‘lived’ because a decade later I accepted a position at the International Rice Research Institute in the Philippines. For almost 19 years, our house remained empty (although fully furnished) until we moved back on my retirement in April 2010.

I then realized just how little of Bromsgrove I actually knew, or had explored during the 1980s. I also needed some activity to keep me fit. In the Philippines I’d been reasonably active in the decade leading up to my retirement, enjoying scuba diving, badminton twice a week, and swimming at the weekends. So I took to walking on a daily basis (mostly). And I try to walk a minimum of two miles or 45 minutes each outing, often quite a bit more, and began to explore Bromsgrove.

Our home lies to the east of Bromsgrove town center, near the junction of New Road and the Bromsgrove Eastern By-Pass (A38). My Bromsgrove walks cover an area within a 1½ to 2 mile radius from home, west almost to the M5 motorway, and east to the Worcester and Birmingham canal.

Here is a small sample of five walks that I have made in the past ten days. I have plotted each of the routes in Google maps, with red via points indicating that a photo (maybe two or three) is attached. Just click on a red point to open the image. I have added grey via points to fill in some of the ‘gaps’ in the routes.

23 March (2.47 miles | 52 minutes)
This is one of my frequent railway walks, taking in the bridge over the mainline to Worcester and the West Country. I had actually planned a much longer walk on this day, but when I arrived at the bridge, I discovered that further progress was blocked as the public footpath had been closed (indicated with a blue via point). The bridge used to be a great location for trainspotting, but since electrification of the line, safety barriers have been constructed on all three bridges over the railway restricting the view from each.

Looking north towards the new station at Bromsgrove, that was ‘electrified’ in 2017.

From the bridge, this walk eventually ends up at the roundabout in Aston Fields. On this occasion, I followed the footpath alongside the railway to join Finstall Road a little way north. Then it was back home from there.

24 March (5.16 miles | 1 hour 51 minutes)
This is one of my longer walks, as far as the Worcester and Birmingham Canal (constructed in 1815), north along part the Tardebigge flight of 30 locks (the longest in the UK over 2 miles), as far as the Tardebigge Reservoir, then west back across the fields to home.

A narrowboat passes through the lock below Tardebigge Reservoir (that supplies water to the canal). From here, this walk takes me west towards home.

25 March (4.67 miles | 1 hour 40 minutes)
This is a route that I’ve walked on just a few occasions, taking me to the northwest of the town center. But it’s interesting to see that side of the town, where urban and rural meet, and farmers are ploughing their fields and keeping sheep, right up against the M5 motorway. Then I head south back towards Sanders Park on the south side of the town center, and from there back along the by-pass to home.

This the public bridleway connecting Perryfields Road with Crabmill Lane. The fields either side were sown with barley in 2018. The spire of St John’s Church can be seen on the horizon, left of center.

27 March (2.42 miles | 51 minutes)
This walk follows a route along New Road into Bromsgrove town center, then through the High Street, on to the Stourbridge Road, before heading southeast once again and back home.

The statue of Bromsgrove poet AE Housman in the center of the High Street.

All Saints’ Church on the Birmingham Road.

1 April (4.2 miles | 1 hour 30 minutes)
I’d set out on this walk intending just to take a few photos for another blog post I’m preparing. But since it was such a fine day, I decided to venture further afield, mainly south from home.

Looking north along Rock Hill towards Bromsgrove town center. The spire of St John’s Church can be seen on the center horizon. This spire dominates the Bromsgrove landscape for miles around.