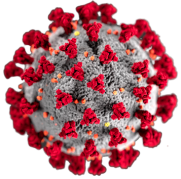 Self isolation—the new ‘selfie’! Social distancing. New words to add to our vocabularies. How our lives have changed in just two weeks.

These are indeed extraordinary times, unlike most of us have experienced in our lifetimes. And all due to the emergence in central China and subsequent pandemic spread of a previously unknown zoonotic coronavirus, now named SARS-CoV-2, that is causing an acute (and deadly for vulnerable individuals) respiratory infection, Covid-19. And while I am a biologist, this blog post is NOT about the virus and its biology. Rather, I’m focusing on some of the issues around and consequences of this pandemic.

I was born in 1948, three years after the end of World War II. I never personally experienced the horrors of that man-made conflict nor indeed any conflict. I find it offensive that politicians, some journalists, and others on social media make comparisons to a conflict that most were born after. I’m not the only one to feel this way. I just came across this opinion piece in yesterday’s The Guardian by Simon Tisdall.

I remember (just) the exigencies of rationing that continued for many years after the end of the war. Also, the difficulties endured during the petrol rationing of the 1956 Suez Crisis. Since then we have not experienced any serious rationing in the UK that I can recall.

However, the Covid-19 pandemic is on a different scale. It’s not that the total number of patients infected with the virus has yet come anywhere near the 1918 flu pandemic, for example. But this virus is new, it’s very infectious, and lethality apparently high. The worry is that without appropriate control, the pandemic will outrun the capacity of health services to provide care for those who suffer from an acute infection. Whole countries are closing down. And while some ‘draconian’ measures (including curfews) have been introduced in some countries, these have yet to be imposed in the UK. ‘Yet’ being the appropriate word.

Having seen the shortages of some products in the supermarkets such as rice and pasta, hand sanitizers, cleaning products, and, inexplicably, toilet paper, I do wonder when rationing across the board will become the norm. How this pandemic pans out, everyone will have to become accustomed to a changed world. I’ll return to that theme later on.

Or woman for that matter.

[Disclaimer: My politics are center left. If I’d had the chance (I didn’t as I was working overseas), I would have voted for Tony Blair’s New Labour. So any criticism of politicians below is not aimed at them because of their right wing political stance (which is anathema to me), but simply because I do not believe they are the right people in this time of crisis.]

As President Franklin D Roosevelt famously said in his first inaugural address on 4 March 1933, ‘. . . the only thing we have to fear is . . . fear itself‘. It’s apt to remember this under the present circumstances. We fear the unknown. In times of crisis, everyone needs reassurance. And, as Simon Tisdall commented in his opinion piece that I referred to above, the war and wartime analogies only stoke fear.

Step up to the plate our political leaders. Or not, as the case may be.

It’s really unfortunate that in these trying times that the governments of both the UK and USA are led by insincere populists, men who are more concerned about their own image.

Sound-bite Boris Johnson (Take Back Control, Get Brexit Done) is resorting to the same sort of rhetoric in his daily Covid-19 briefings (with the Chief Medical Officer and the Chief Scientist often standing either side) as he did during the Brexit campaign. Making claims he cannot substantiate, such as we’d defeat the disease in the next 12 weeks. Evidence? That doesn’t seem to matter to this charlatan, whose attention span and lack of interest are legendary. It doesn’t help that at critical points in any press conference and the like his body language betrays his insecurity. Such as rubbing his hand through his shaggy hair. Not the most reassuring action. 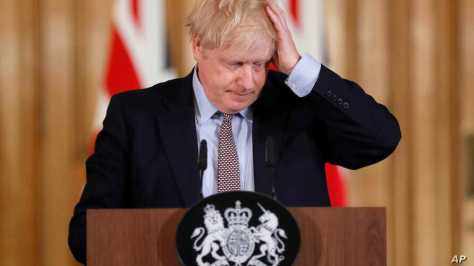 As a question from ITV correspondent Robert Peston unfolded just the other day at a No. 10 briefing, Johnson’s habitual smirk evaporated to be replaced by various degrees of alarm, bewilderment, fear even, and not the look of a Prime Minister at the top of his game. This is not what he expected after his December electoral victory giving him an insurmountable 80 seat majority, and the opportunity, he must have believed, to do just whatever his fancy lighted on.

Here is a damning opinion piece from The Guardian by Marina Hyde on 20 March, who writes ‘We are being asked to put our trust – our lives – in the hands of a man whose entire career, journalistic and political, has been built on a series of lies.’

It seems to me that the UK government has not developed a coherent Covid-19 communications strategy. Have a read of this 21 March piece from BuzzFeed about the behind-the-scenes debates, arguments even, between politicians and experts. At the beginning of the outbreak in the UK, Johnson used his press briefing to suggest, albeit perhaps by accident rather than design, that the old and vulnerable were ‘collateral damage’ during the epidemic. “It is going to spread further“, he said, “and I must level with you, I must level with the British public, many more families are going to lose loved ones before their time.” Yes, that’s indeed a strong possibility. But emanating from the mouth of a politician who is widely mistrusted, and who comes across as callous and self-centered, whatever issue he addresses, it was a communications disaster.

What a message to send out to an already fearful population. Read about that press conference here.

And this appeared in the Sunday Times today. 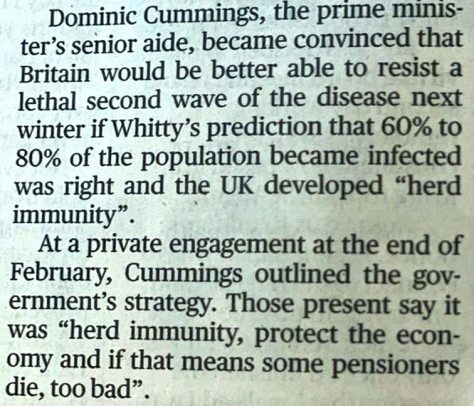 If true, this is an appalling perspective from the Prime Minister’s Chief Adviser Dominic Cummings (whose credibility among a large swathe of the population has already taken a dive).

And, I’m afraid, Johnson’s often blustering delivery, and lack of clarity on issues that should be unambiguous (his classical references, his use of language that most never use or at the very least understand) have probably exacerbated a situation that was rapidly spiralling out of control.

Communications strategies should deliver straightforward messages in plain language. No ifs or buts. Johnson has catastrophically failed in this respect.

Take the issue of social distancing and whether pubs, clubs and other venues should remain open (until last Friday night when the government finally enforced closure). Clearly millennials (and men in particular) had heard the message that they would be less impacted by Covid-19. They ignored the social distancing advice. And it hasn’t helped that Tim Martin, CEO of pub chain Wetherspoons (arch-Brexiteer and now self-proclaimed ‘epidemiologist’ apparently) could see no reason for pubs to close and went public with his criticism of the decision.

Oh look, the coronaviruses have all chipped in to hire a mouldy potato to be their spokesperson on TV. Clever. pic.twitter.com/ssxFXkzSUq

But if I think that the situation is grave here in the UK, just take a look at what is happening on the other side of the Atlantic, a country without a public healthcare system that takes care of the sick, elderly and vulnerable, come what may. Given the behavior and responses of POTUS #45, Donald J Trump, it’s surely time to seriously consider invoking Section 4 of the Twenty-Fifth Amendment. Why he is still in power is the question asked in this article on the Slate website.

Here is a leader (a term I use very lightly indeed) who has ‘hunches’ or ‘feels good’ about the situation, ignoring facts, scientific advice and stating things that are palpably false, claiming originally that coronavirus was a hoax dreamed up by the Democrats, and then later stating, once the situation had deteriorated, that he knew all along that it was a pandemic. No change in behavior there. Every press briefing becomes a campaign opportunity. And when challenged, even by the simplest and most straightforward of questions, Trump’s reaction is unbelievable. Just watch him throw a tantrum and verbally attack a journalist a couple of days ago when asked how he would reassure the American people, following a comment from Trump recommending the use of chloroquine against the virus. Extraordinary!

And so, here is another piece from Rolling Stone (from 20 March) that Trump’s live briefings are a danger to public health.

And now, Trump is being hailed as a ‘wartime President’, hoping that it will boost his electability in November’s election — assuming that goes ahead as expected. For heaven’s sake! Just read this article from today’s The Guardian.

But if you want to see how any leader should behave, just take a look at this address to the people of Scotland by First Minister, Nicola Sturgeon, on 20 March. What a contrast from Johnson and Trump. I’m no particular fan of Nicola Sturgeon, but she got this just right.

It’s interesting—but also concerning—to think what a changed world will look like. Already, a group of 34 ‘big thinkers’ have waxed lyrical on this very topic just a couple of days ago in the Politico Magazine online.

At the beginning of this post I suggested that ‘selfie’ had taken on a new meaning: self isolation. Here’s me, taking a selfie while taking a selfie.

Steph and I are self isolating since we are in that elderly, over 70 demographic. But if the weather is fine (like earlier today) we have gone out for a walk. We need the fresh air. So we went along the Worcester and Birmingham Canal a few miles from home, and encountered only one or two other walkers while maintaining the necessary social distance. 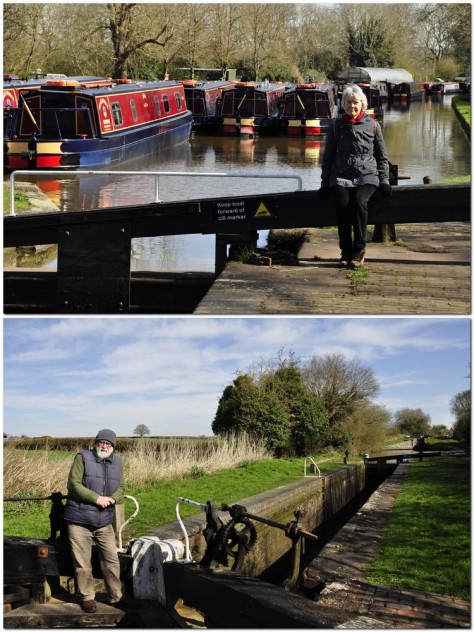 I came across this the other day. Maybe our antipodean friends will soon be evolving some pandemic language variants.

Stay safe everyone. WASH YOUR HANDS – repeatedly, and thoroughly. Here’s the best demo I’ve yet seen on how to wash your hands properly, using black ink in place of soap to illustrate just how it should be done. Never mind that the commentary is in Spanish. That’s not needed.