St Paul, Minnesota is almost a second home. I’ve been visiting there regularly since 1998 when Hannah, our elder daughter, transferred from Swansea University in the UK to Macalester College, a private liberal arts college in St Paul. Incidentally, Macalester is the alma mater of former UN Secretary General Kofi Annan.

Hannah settled in St Paul after graduation, completed her graduate studies at the University of Minnesota, married Michael, and home is now complete with our two American grandchildren Callum (who will be seven in mid-August) and Zoë (five last May). So you see, Steph and I have many reasons for returning to the Twin Cities.

St Paul was the destination of our 2800 mile road trip from Georgia, beginning in Atlanta on 31 May and lasting 10 days, and covering 11 states. It was a great trip, but I was somewhat relieved when we pulled into Hannah’s driveway on the Friday afternoon, having covered the final 333 miles from Iowa City, looking forward to almost three weeks with the family and exploring favourite haunts, and hopefully discovering a few new ones. We are less familiar with the other half of the Twin Cities, Minneapolis (and currently in the news for all the wrong reasons), that lies on the opposite bank of the Mississippi from where Hannah and Michael’s home is in the Highland Park area of St Paul.

Callum finished the school year on the day we arrived, and Zoë didn’t complete her final childcare year at the St Paul Jewish Community Center until the following Wednesday. For the first three days of that first St Paul week we had Callum to ourselves, and both of them for the Thursday and Friday. So we had to find some fun things for Grandma and Grandad to do with them. The second week they went off to summer camp.

We visited Camp Butwin to check it out. Then the following Monday, it was Callum and Zoë’s first day. I was on drop-off and pickup duties!

Stillwater
Stillwater, a small town on the banks of the St Croix River (the state line between Minnesota and Wisconsin), some 27 miles east from Hannah’s home, is one of our favorite places. I first went there in 2004 with Hannah and Michael, and heard my first Lake Wobegon monologue from Garrison Keillor as we sat in the car park beside the river.

It’s a pleasant riverside town, that will become even better once the new bridge over the St Croix River is opened in August. This bridge will replace a narrow, 80 year old lift bridge in the town center.

This is the first time I have seen the bridge raised, to allow a paddleship through. The new bridge can be seen in the distance

The Lift Bridge at Stillwater

Being a main route over to Wisconsin, much heavy traffic currently passes through the town center; this should disappear after August. No doubt to the relief of Stillwater residents and presumably many businesses. But will the diversion away from the town center take away some passing trade? Probably not, as Stillwater has its own attractions for visitors.

Stillwater high street has numerous antique and souvenir shops, and bookshops. One gift shop, Art ‘n Soul, on the corner opposite the lift bridge, sells beads, mainly crystals. Every time we visit Stillwater, Steph (an avid beader) has to pop in just to check things out. 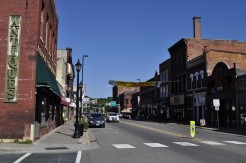 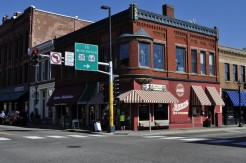 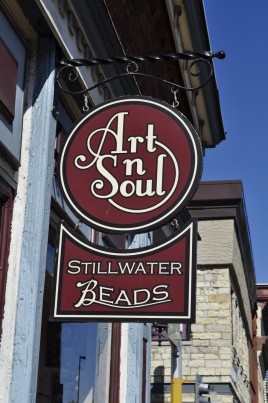 On the hillside above the town there is an excellent children’s play park, and Callum spent a very enjoyable hour amusing himself on all the apparatus.

The St Paul-Minneapolis Light Rail
Opened in June 2014, the Green Line of Metro Transit connects downtown St Paul with downtown Minneapolis, passing through the campus of the University of Minnesota. On a very cold June day in 2014, we queued up to take the first train from St Paul on the Green Line. Then the heavens opened, and we beat a hasty retreat to the car parked nearby. This was our first opportunity since then to ride the Light Rail.

Callum and Zoë couldn’t keep still, and I warned them about standing up while the train was moving. It travels at quite a lick, as the clip below shows, and the cross-city journey takes about 40 minutes.

On the return from Minneapolis (we’d met up with Hannah and Michael in downtown Minneapolis for lunch), and as we were approaching the Capitol/Rice St stop, there was an almighty bang, and the driver slammed on his brakes. We’d hit a car (with five passengers, including a baby) that had apparently tried to run a red light. Within minutes we were surrounded by police cars, rescue vehicles, the fire service, and ambulances. One woman was taken to hospital although did not appear to be seriously injured. For our part, Callum and Zoë happened to be sitting when the impact occurred. No-one was hurt on the train. 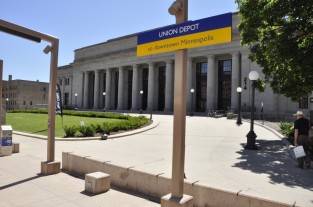 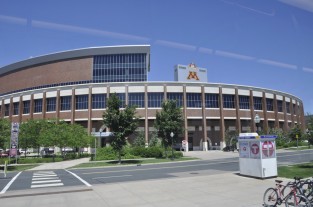 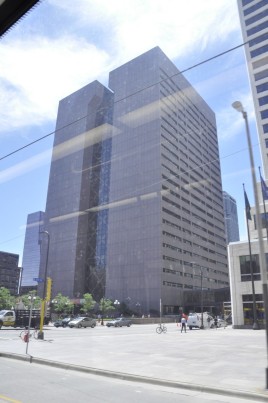 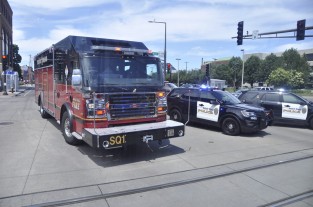 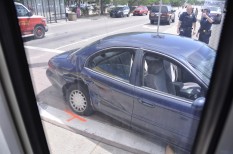 While St Paul exudes ‘old money’ and extravagant mansions along Summit Avenue, downtown Minneapolis is the bright and brash commercial center. Skyscrapers gleaming in the sunlight, reflections, and on one building, celebrating a local boy made good. Who? Nobel Laureate (for Literature) and sometime troubadour, Bob Dylan.

The McNeely Conservatory at Como Park
This is one of St Paul’s jewels. It is always a treat to see what delights the seasonal planting design brings. So, it is no surprise that we had to visit once again this year. 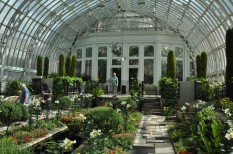 Midsummer, and we headed off to the American Swedish Institute, just off E 26th St in Minneapolis. It was a very hot Saturday, so we were glad to be able to tour the Turnblad Mansion, the focus of the institute today. Built by newspaperman Swan Turnblad at the turn of the 20th century. It’s ostentatious but so elegant, and a delight to view. I was fascinated by the Swedish ceramic stoves, known as a kakelugn, in many of the rooms. I didn’t have my Nikon with me, so the quality of the photos I took with a small Casio is less than I’d like. Nevertheless, they do give you an impression of this beautiful building. 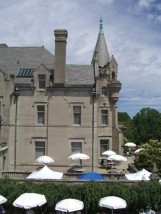 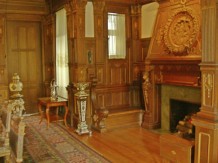 Although I’d never been to the American Swedish Institute before, I was ‘familiar’ with the Turnblad Mansion, as I mentioned to one of the volunteers, John Nelson. The mansion featured in one of the programs by Tory politician-turned-TV presenter, Michael Portillo (he of the flamboyant trousers and jacket) about the Twin Cities, in his series Great American Railroad Journeys (a spin-off from his popular Great British Railway Journeys), and broadcast earlier this year on the BBC. I mentioned this to Mr Nelson, and he told me he had sat next to Portillo in the sequence where he dined at the mansion. He said he hadn’t seen the program nor met anyone, until that moment, who had!

The Minnesota Landscape Arboretum
This was our third visit to the arboretum. Again, we enjoyed a tour round the ‘Three Mile Drive’, discovering new landscapes where we didn’t stop last year, and renewing our acquaintance with those we had see previously only on the Autumn. 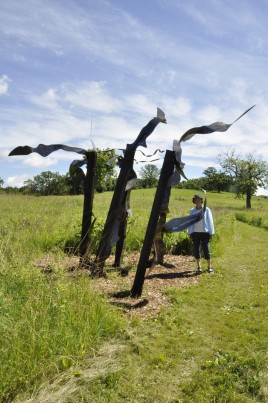 The St Paul waterfront
Finally, we took advantage of the excellent weather to explore the walks along the Mississippi close to where Hannah and Michael live, at Hidden Falls Regional Park, and beside the Downtown area of St Paul. 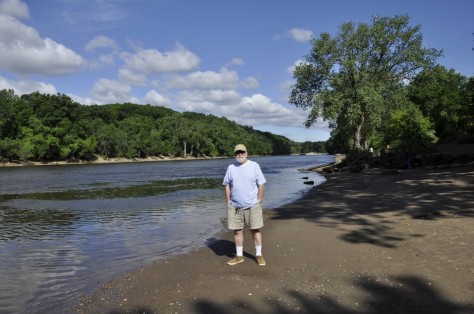 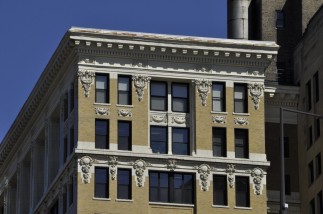 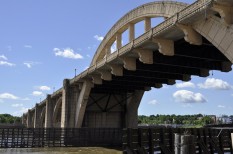 Finally, of course, we had time to sit back, relax and just enjoy being with Hannah and Michael and the grandchildren. And, of course, the addition to the family: Hobbes the cat! 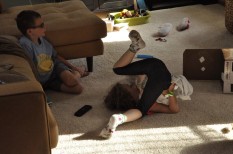 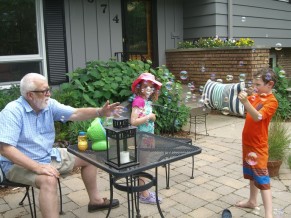 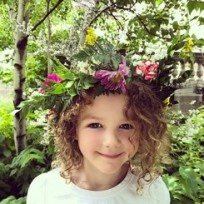 All too soon our 2017 visit to the USA was over, and on 28 June we headed back to MSP to catch our overnight flight on Delta to AMS, with a connection to BHX. It’s three weeks today since we came home. It seems a lifetime ago. But there’s always next year!