Warkworth Castle, built in the 12th century, stands on a narrow neck of land in a loop of the River Coquet in Northumberland, close to where the river flows into the North Sea at Amble.

View from the Keep along the River Coquet towards Amble and the North Sea.

Steph and I were visiting family in Newcastle in April 2018, and on a bright sunny day, enjoyed an excursion to Warkworth beach with our younger daughter Philippa and her husband Andi, and grandsons Elvis and Felix (then 6 and 4, respectively). 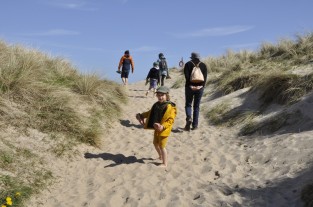 Phil and Andi went straight home after the walk and a picnic, but we decided to take the boys to Warkworth Castle close-by, which is owned by English Heritage. And we were in luck.

On the day of our visit (21 April) English Heritage was celebrating St George’s Day (actually 23 April) with displays of ‘armed combat between knights in shining armour’, and many other attractions. 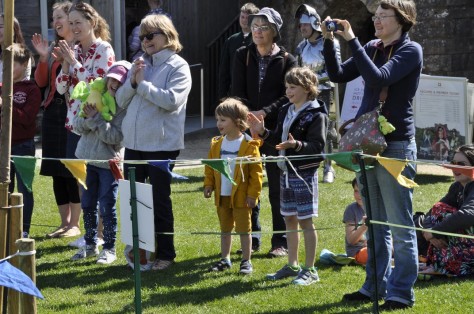 Felix and Elvis (with Grandma behind) enjoying the armed combat. 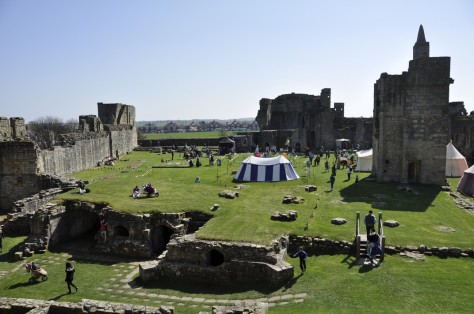 View from the Keep towards the Gatehouse. The Lion Tower is on the right.

Carvings on the face of the Lion Tower.

The castle came into the Percy family (later the Dukes of Northumberland) in the mid-fourteenth century. It saw action in the Wars of the Roses in the late fifteenth century, and parts of the castle were demolished (or ‘slighted’) then. It suffered further damage in the late sixteenth century.

Today, many of the internal structures have disappeared, but the outer curtain wall stands more or less intact. The Keep can be explored. The Lion Tower (on the right in the image immediately above) has some impressive stone carvings above the archway.

It’s an excellent destination for adventurous grandchildren who have some excess energy to burn off. From their reaction at being allowed to explore the different buildings it was clear that Elvis and Felix enjoyed their visit – just as much as Grandma and Grandad.

The image of Warkworth Tower on its mound that’s covered in daffodils has become iconic, and often use in tourism brochures and the like for Northumberland. Here’s my take. 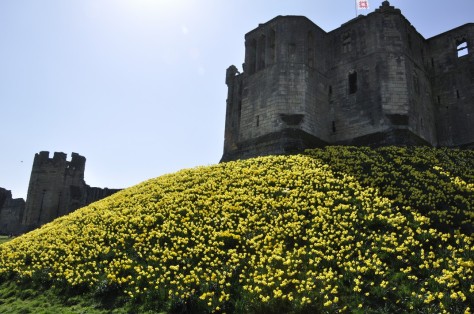