Since 2011, we have made five major road trips across the USA, and two of shorter duration.

That first year, we headed for Arizona and New Mexico, taking in the Grand Canyon, Canyon de Chelly and other interesting sites in those dry climates.

We decided to stay closer to home (home being where our daughter Hannah and her family live in St Paul MN) in 2012, just visiting the Boundary Waters Wilderness Region and the Gun Flint Trail of northern Minnesota .

2013 saw us on the Pacific coast of Oregon, and a trip as far south as Sacramento in California, taking in Oregon’s Crater Lake and the Californian redwoods on the way.

We headed west from St Paul across the prairies in 2014, the first of our really long trips, taking in the Badlands and Mt Rushmore in South Dakota, Devil’s Tower in Wyoming, the Bighorn Battlefield in Montana, and Yellowstone National Park.

We toured Scotland in May-June 2015 so decided not to make any road trip in the USA, instead choosing to take Amtrak to Chicago for three days.

I broke my leg in January 2016, so any long road trip was out of the question. However, we made a short trip north of the Twin Cities to find the source of the Mississippi River.

The Appalachians called us in 2017, so we flew into Atlanta and drove back to Minnesota through Georgia, South Carolina, North Carolina, Tennessee, Virginia, West Virginia,Kentucky, Illinois, Missouri, and Iowa.

We were equally ambitious this year, taking in New England (Massachusetts, Vermont, New Hampshire, and Maine) before heading west to Niagara Falls in New York, and then south and west through Pennsylvania, Ohio, Kentucky and Indiana, before heading north into Michigan, crossing Lake Michigan on the car ferry, and driving across Wisconsin to end up, once again, in the Twin Cities.

Until this year, I had planned our trips using various maps. For the Arizona/New Mexico and Oregon/California trips in 2011 and 2013, and for trips around Minnesota, I purchased a DeLorme Atlas & Gazetteer for each state. These are very detailed and comprehensive, and show even the most minor of roads. Since we like to take highways and byways (US roads, state highways, and even county roads) as much as possible and avoid the busy Interstates, these DeLorme publications allowed me to draw up quite detailed itineraries.

But they are heavy! And once we planned to drive from Georgia to Minnesota in 2017, carrying around a DeLorme Atlas for each state was not an option.

Instead, I purchased Rand McNally road maps for each state, and plotted a route using Google maps, then transferring it to the map itself, as shown in the image below. I also verified the route using Google Street View, especially to check out the various road junctions. 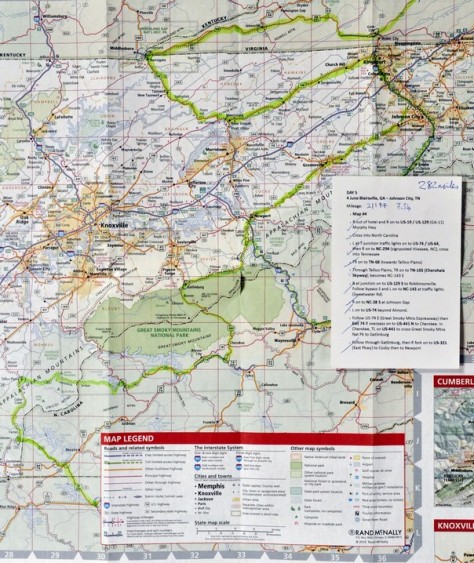 Steph was the navigator – which had the unfortunate consequence that she had to have her head in a map day in and day out. To assist with navigation I also drew up detailed route instructions on separate cards for each day. One of these is shown in the upper image above. These provided information on the road numbers (roads in the US can carry more than one number as roads combine for short or long distances), junctions, and any other special feature or attraction that we had decided to visit.

However, at Christmas 2017, I received a Garmin DriveSmart™ 51 LMT‑S GPS Navigator with a 5″ display, which came with UK and Ireland maps installed (that are regularly updated).

One of the features I really like is the accompanying BaseCamp software installed on my laptop that allows me to plan routes, with any degree of detail, and transfer them to the sat nav. Once I’d got the hang of its idiosyncrasies, I began plotting routes from home in the UK, finding the best options, and at the same time learning the various features of the sat nav itself.

In BaseCamp I found the easiest way to plot a route was to choose the starting and destination waypoints, and let the software ‘find’ the optimum route. In this example below, I plotted a route from Niagara Falls NY to Canton OH, which was the third day of our recent trip after leaving Maine. 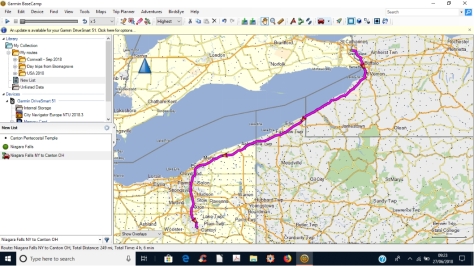 As you can see if you open a larger image, the route calculated would have taken us on the interstate close to the shore of Lake Erie. But I wanted to cut across country and travel through the Allegheny Forest of Pennsylvania.

BaseCamp allows you to shape any route by adding ‘via points’, as many as needed to develop an unambiguous route when it is recalculated by the sat nav itself once transferred. 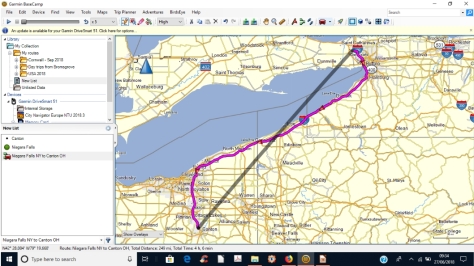 Then, once all the via points have been added, your final route, below, is transferred to the sat nav. 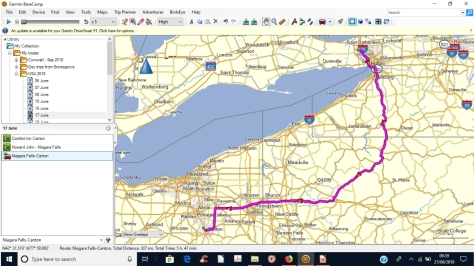 My Garmin proved invaluable during this trip, especially when we did travel on the Interstates, and these merged with one another, giving me advice when lane changes were necessary, changes to speed limits, and always anticipating any junctions half a mile ahead.

We only had a couple of glitches. Once, after we’d arrived at our hotel, I discovered the reason why the sat nav had asked me to make a U-turn on one street earlier in the day. I’d programmed in the same via point twice. Another time, in deepest Ohio, one of the roads I’d chosen was closed some miles ahead, so we had to follow a set detour. The sat nav didn’t like that, urging me to make a U-turn, or turn at the next junction. Having completed the detour, our original route appeared on the screen, and on we continued. On another occasion, crossing Kentucky along the Ohio River, we had to make another detour, and suddenly the icon for the vehicle was moving across a blank screen – until we reached another road that it recognized. I think we had been diverted on to a new road that wasn’t programmed into the USA maps I’d bought before the trip.

With the installed UK and Ireland maps, I receive updates all the time. The USA (and Canada and Mexico) maps are a one-time purchase, not particularly cheap, but well worth it. It’s just a pity that Garmin does not offer regular updates for these purchased add-on maps as well.

The sat nav is great, but we also found it useful to have a map to refer to see the bigger picture. We were able to find road maps for some states in hotel receptions or at state information centers.

And one of the biggest advantages of using a sat nav? Steph no longer has to navigate hour after hour, and can enjoy looking at the changing landscapes. I wouldn’t say I was particularly stressed on any of my earlier road trips. But with the sat nav I did find that my anticipation level was much lower, and I could also enjoy seeing the countryside we were passing through, knowing that I would be navigated safely to our destinations, especially through built-up areas.