In July 2013, during one of our regular trips to Newcastle upon Tyne in the northeast England to visit our younger daughter Philippa and her family, we headed out into the Northumberland countryside to the National Trust’s Wallington, a late 17th century house west of Morpeth (map). 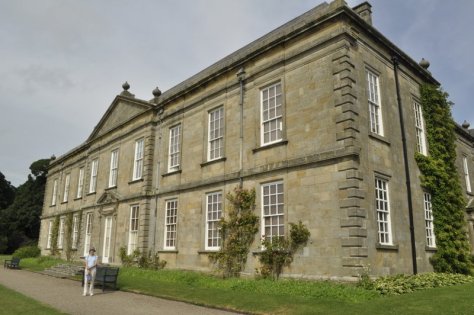 Since we moved to Newcastle a couple of months ago, we have taken advantage of many fine days to get out and about. And last Monday (14 December) we headed to Wallington once again. After a welcome cup of Americano, we enjoyed a walk of just under four miles around the grounds. The house was closed due to Covid-19 restrictions, like most if not all National Trust properties nationwide.

The Wallington estate was purchased in 1688 by Sir William Blackett (1657-1705) who came from a prosperous Newcastle mining and shipping family. He demolished the existing Fenwick family tower on the site (parts of which can still be seen apparently, in the basement), and Wallington became a country retreat. It underwent further developments, gaining its Palladian facade in the 18th century.

In 1777, Wallington passed to the Trevelyan family who continued to reside there until 1941. Then the 3rd Baronet (of the second, Wallington creation of 1874), Sir Charles Trevelyan, gave Wallington to the National Trust and, in the process, disinheriting his eldest son George (the 4th Baronet). [1]

Approaching Wallington, there are two features which stand out. In the valley below the house the River Wansbeck flows eastwards towards the North Sea. There is a beautifully constructed hump-back bridge over the Wansbeck, which from its architecture must date from around the time that Wallington was redeveloped in the 18th century. 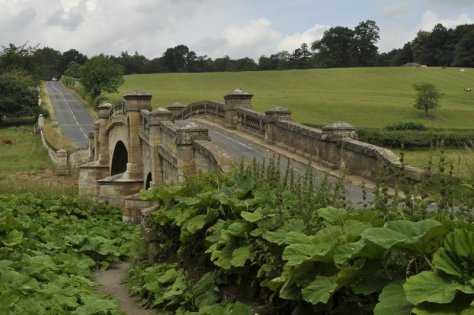 The second feature, and close to the house on a lawn overlooking the approaching road B6342, is a group of four stone dragon heads (or some other mythical creature, perhaps griffins), lined up and glaring (or grinning—take your pick) over the Northumberland countryside.

They were brought to Wallington in the 1730s as ballast in one of Sir Walter Calverley-Blackett‘s ships. Presumably he was shipping coal to the capital. Anyway, from what I have been able to discover, these dragon heads came from Bishopsgate in London after it was demolished to make way for the increase in London traffic. They have been in their current location since 1928.

Like many country houses, Wallington has its fair share of treasures displayed by the National Trust in the many rooms, which we enjoyed during our 2013 visit. 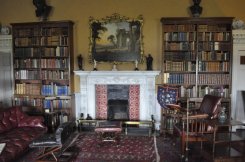 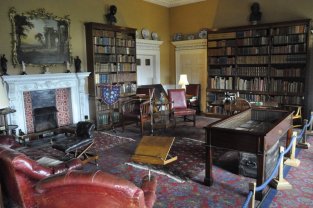 But, for me, the pièce de résistance is the central hall, once an open courtyard that was enclosed (at the insistence of Pre-Raphaelite Brotherhood founding member John Ruskin) by Pauline, Lady Trevelyan, wife of the 6th Baron Trevelyan of Nettlecombe, Sir Walter Calverley Trevelyan (a renowned naturalist and geologist) who bequeathed Wallington to his cousin, Sir Charles Trevelyan (created the 1st Baron Trevelyan of Wallington in 1874).

From this satellite image from Google maps you can see the original layout of the house, and the enclosed central courtyard. 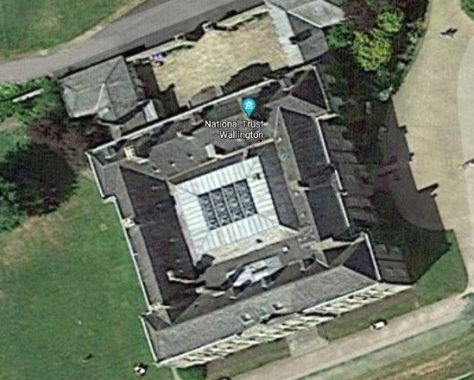 Wallington became a retreat for the Pre-Raphaelites, one of whom, William Bell Scott, a Newcastle painter and poet, was commissioned to decorate the central hall with a series of exquisite murals depicting scenes from Northumbrian history and folklore (and often incorporating local personalities into these). I recently wrote a separate piece about Scott. 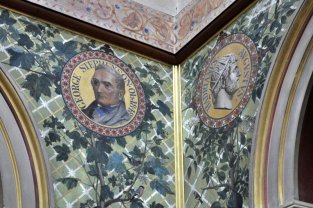 I shall enjoy returning to Wallington as soon as Covid-19 restrictions are lifted and it’s once again safe to make such visits inside (and after receiving one of the vaccines).

But there’s so much more to see and appreciate at Wallington, since the woods, garden, and park are quite extensive. Last week we re-explored the East Wood and ponds, and the walled garden, before heading down to the Wansbeck which could not be crossed at the stepping stones due to the high water level. 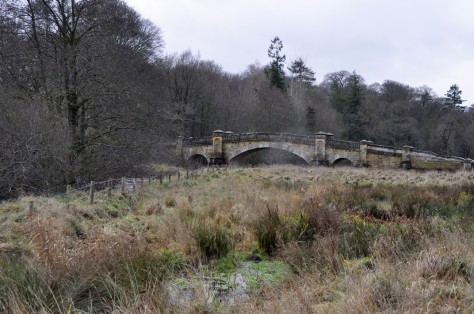 We didn’t complete the full river walk, heading back up the B6342 from the bridge back to the house, and then into the woods on the west side of the house.

The south front of the house is protected by a rather impressive ha-ha – somewhat more formidable than others we have seen at the likes of Hanbury Hall (in Worcestershire close to our former home in Bromsgrove) and Berrington Hall in Herefordshire, for example.

The walled garden, some minutes walk from the house was splendid during our July visit, but had bedded down for its winter sleep a few days ago. Surrounded by red brick walls, mirroring an even more impressive wall just outside the garden and overlooking the garden pond, it never ceases to amaze me just how much these landowners and would-be aristocrats spent on improving their properties. 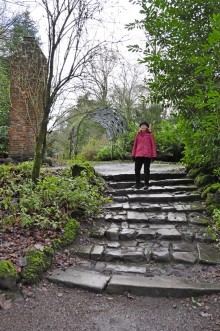 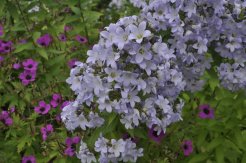 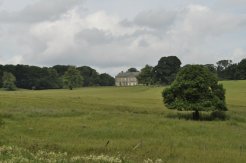 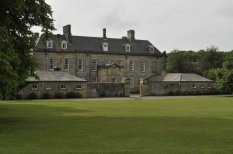 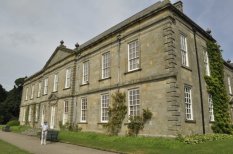 Because Steph and I are retired, we can take advantage of good weather (and sometimes not so good) to drop everything and head off to glorious properties like Wallington. And although there are perhaps fewer owned by the National Trust here in the northeast, we shall just have to travel a little further afield and visit those parts of northern England that we have not yet had chance to explore more fully yet. Added to the properties of English Heritage, we will have more than enough to fill our retirement for several years to come.

[1] In summer 1966 (or maybe late Spring 1967) I met Sir George Trevelyan at Attingham Park near Shrewsbury, when I attended a weekend course on the reclamation and botanical rehabilitation of industrial waste sites. Sir George was, for many years, the warden of the Adult Education College at Attingham Park, which is now owned and managed by the National Trust, and has been considerably restored internally and externally since the late 1960s.