Call me old-fashioned, but I prefer the term ‘botany’ to ‘plant sciences’ or ‘plant biology’ that are now preferentially used to give the study of plants a more ‘modern’ image.

And I’m proud that I received my university education in botany: BSc at Southampton (combined with geography, 1970), and MSc (in genetic resources, 1971) and PhD (botany – biosystematics of potatoes, 1975) at Birmingham. By the time I returned to teach at the University of Birmingham in 1981, the Department of Botany had already become the Department of Plant Biology, a decision made in the late 1970s in the hope of attracting more undergraduates to study plant courses offered as part of the biological sciences degree.

Botany has had a bit of a bad press, I guess. And there has been a significant decline in teaching plant sciences at university level in the UK.

For one thing there’s an image issue. It’s often seen as old-fashioned, the purview of enthusiastic Victorian amateurs like country parsons collecting and studying wild flowers, and perhaps not relevant for today’s society. Nothing could be further from the truth. Given that food security is dependent upon the productivity of agricultural systems – all life depends on plants in one way or another – the study of plants is essential for humanity’s survival.

In an interesting article [1], Grierson et al. (2011) ask what are the 100 most important questions for plant science research. They also propose that “We need to radically change our culture so that ‘plant scientist’ (or, if we can rehabilitate the term, ‘botanist’) can join ‘doctor’, ‘vet’ and ‘lawyer’ in the list of top professions to which our most capable young people aspire.”

I’ve had a successful career over 40 years based on botany, one way or the other. So why did I become a botanist in the first place? In high school, I didn’t study biology until I began my GCE Advanced Level courses in 1965. Biology was not taught at my school in earlier years, and only accepted a handful of students for the advanced course. I’d always had an interest in natural history, particularly bird watching, and had harbored ideas at one time of becoming a professional ornithologist. But over the two years of the biology ‘A level’, I came to realize there was likely to be a more secure future in plants, and even the possibility of getting into agriculture in some way, better still if that would take me overseas.

Southampton University was not my first choice, but once I’d attended an interview there, I knew that was where I wanted to study. As a botany-geography undergraduate, I knew that there would be a focus on plant ecology, even though we took the full honours course for two years, and selected modules in the final year. My tutor was Dr Joyce Lambert, Reader in Ecology, who had studied the origin of the Norfolk Broads in the east of England, and shown that they were actually man-made, the result of medieval peat diggings that became flooded. Just before I went to Southampton (and for the rest of her career at Southampton – she retired in 1979) she began working on multivariate methods to study plant communities (with former head of department Bill Williams, who had left Southampton in 1966 to join CSIRO in Australia). I even completed my dissertation on an assessment of vegetation sampling techniques based on quadrat size related to the height of the vegetation (not really a success). I made this study in the Back Forest area of the Roaches in the Staffordshire Moorlands. I measured quadrats along a 200 m transect from open heath to larch-oak woodland dropping steeply to the Black Brook and River Dane. I used a tape recorder with a thumb switch microphone to record the presence and absence of species in each quadrat, using a checklist of species. 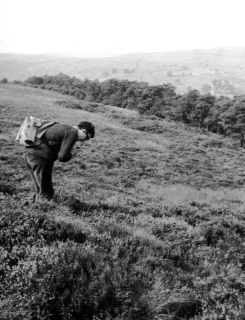 As a final year student, however, my interests had already begun to turn from ecology. I took courses on plant speciation and plant breeding with geneticist Dr Joe Smartt, and a special course in flowering plant taxonomy offered by Professor Vernon Heywood of Reading University. Southampton’s own taxonomist, Leslie Watson had emigrated to Australia in 1969, and it was felt that a botany degree without any taxonomy component was not complete. Heywood travelled down from Reading once a week for 10 weeks, giving two lectures each time. This was not one of my specific elective courses for examination, but I decided to sit in and listen – and I was hooked. Linking what I heard in Heywood’s lectures with the plant speciation and plant breeding courses, and ecology was the foundation for my career-long study of plant variation, and entry into the world of plant genetic resources.

But there was one research endeavor that really fired my imagine (and others) – and it’s as good today as when it was originally published in the 1930s, 40s and 50s. In a ground-breaking series of experiments, geneticist/ecologist Jens Clausen, taxonomist David Keck, and plant physiologist William Hiesey, from the Carnegie Institute of Washington located on the campus of Stanford University, studied the adaptation of plants to their environments, the variation in plant populations, and the genetical and physiological basis of the variation they observed. 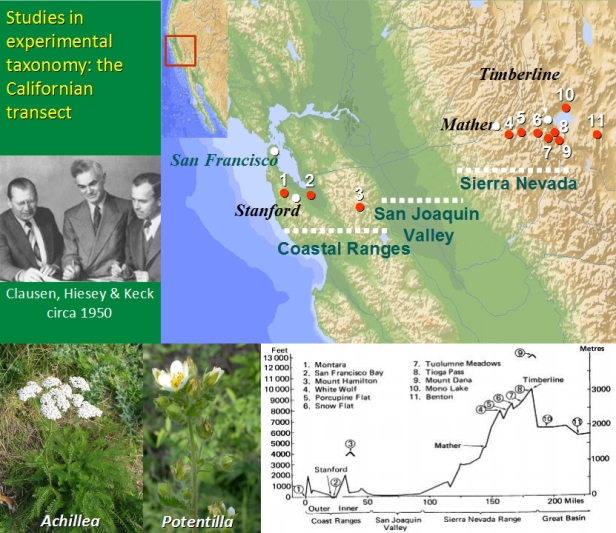 Establishing a series of experimental stations across California, they undertook transplant experiments in a range of species such as Achillea and Potentilla, to understand the nature of variation and species, and published in a series of monographs Experimental Studies on the Nature of Species.

Similar work had been carried out in Scandinavia by Turesson and in Scotland by Gregor, but the Californian group was, in my estimation, pre-eminent. Thus was the concept of the ecotype established. And the methods of experimental taxonomy and genecology which they developed are used to study the nature of variation in the genetic resources of crop plants conserved in genebanks around the world – and certainly the approach I took with my own work on lentils and grasspea (Lathryus sativus), potatoes, and rice.

Another influence was Missouri Botanical Garden geneticist Edgar Anderson. If you’ve not read his highly entertaining and readable Plants, Man & Life, then grab yourself a copy.

But the most influential concept he developed was introgressive hybridization, the merging of plant species populations through crossing and backcrossing – a phenomenon we believe to have played a major role in the evolution of many crop plants.

Joe Smartt encouraged me to follow a career in plant genetic resources. In fact he was the one who suggested I should apply for a place on the Birmingham MSc course on Conservation and Utilization of Plant Genetic Resources, founded by Jack Hawkes in 1969. Joe had studied the cytogenetics of groundnut (= peanut, Arachis spp.) under Walter C Gregory at North Carolina State University, and joined the Department of Botany at Southampton in 1967. He had also spent time in Northern Rhodesia (= Zambia) working on groundnuts in the 1950s.

And the rest is history, as they say, and I spent the rest of my career studying genetic resources and agriculture in many different countries (Peru, Costa Rica, Canary Islands, Philippines and other countries in Asia).

Some of my own interests have included the species relationships of triploid potatoes, and we have looked at the compatibility relationships between wild and cultivated forms. 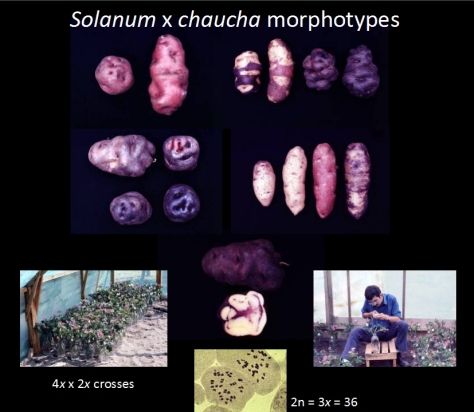 These photos show the growth of pollen tubes in compatible (left) and incompatible (right) crosses between wild potato species. 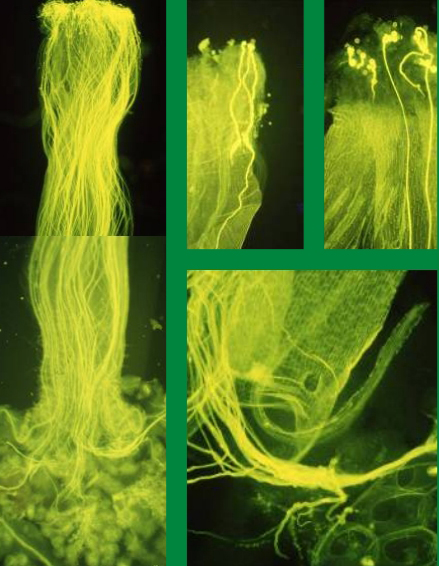 In potatoes and rice we made tens of thousands of crosses to understand the biological relationships between different species.

It’s important to make many crosses when the chances of success are quite low. And we have looked at the morphological and biochemical variation in different plant populations – the ability to study species relationships at the molecular level is throwing a whole new perspective on plant speciation; applications of GIS permit easier mapping of diversity.

One of the concepts that has guided much of my work with genetic resources is the genepool concept developed by Illinois geneticists Harlan and de Wet in 1971 [2]. This allows one to assess the relationship between crops and their wild relatives based on crossability, and the accessibility of different genetic resources that can be used in crop improvement.

I’ve been very fortunate in my career choices – all because of my decision to become a botanist. Who says that botany is an old-fashioned science? Just look through the 100 science challenges I referred to earlier on and you will see just how and why it’s ever more important that we invest in the study of plants.

7 thoughts on “Proud to be a botanist”