In the village of Bredon, nestling at the foot of Cotswolds outlier Bredon Hill, and alongside the River Avon (of Shakespeare fame) in southern Worcestershire, is an agricultural treasure from medieval times. From 1350 or thereabouts. 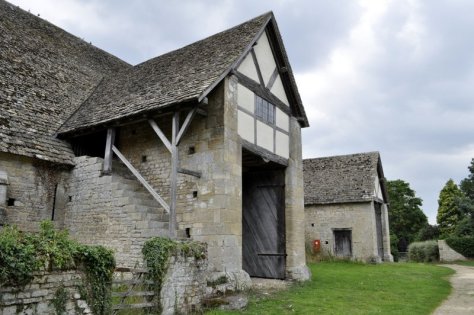 This is the Bredon tithe barn, constructed from golden Cotswolds limestone, with beams from local oak trees, and a stone roof. Oriented north-south, and measuring more than 130 feet long, by about 44 feet wide (and at least 50 feet or more to the apex of the roof) this tithe barn is one of the best remaining examples of its kind – there are others dotted around England’s landscape.

It’s not so easy to find. Although a National Trust (NT) property, there are no detailed directions in the NT Handbook, and in the village of Bredon itself there are no signs to indicate its precise location. We drove through the village and I thought I saw it in the distance, but actually finding a way to it was almost impossible. Eventually, we had to ask the church warden who was working in the churchyard.

Open 7 days a week, it’s possible just to wander around the barn and take in its magnificent woodwork and construction. Occupied by quite a large population of doves, it’s best not to wander round with one’s mouth open when looking up at the roof.

Here’s what is written on one of the National Trust display boards just inside the barn’s open door:
The name Bredon comes from bre, the old British word for a hill. In prehistoric times a fort stood on the hilltop, and the valley below was already being farmed.
Bredon was an important place by the 8th century, when a minster, or monastery here was granted a great deal of land by the kings of Mercia. Its properties extended as far as Cutsdean in the Cotswolds and Rednal (now on the outskirts of Birmingham) to the north. Gradually this great estate declined and the monastery was reduced until it became no more than a rich parish church. The Bishops of Worcester took over the land and remained lords of Bredon from about 900 until 1559.
The Bredon barn was built for the Bishops about 1350, at a tragic time in medieval history  The Black Death, the terrible plague that swept across Europe from the East, killed more than a third of the people of England. Half the population of Bredon died, and Bishop Wulstan de Bransford, who probably commissioned the barn here, himself fell victim on 6th August 1349.
Although the barn at Bredon has traditionally been known as a tithe barn, recent research indicates that it was almost certainly a manorial barn, used for storage of crops from the large and important manor of Bredon.
Tithe barns were attached to churches, and were used to store tithes (tenths of the produce of the land) paid to parish priests as part of their income. The fact that the Bishops of Worcester were lords of the manor here for more than 600 years probably accounts for the misapprehension. The Bredon barn was well-built and large – 132 feet (40.2 metres) by 44 feet (13.4 metres) – because it was vital to the economy of a large and important estate.

The barn was badly damaged by fire in the 1980s, but the National Trust was able to raise the money for its restoration, using locally-sourced oak for the beams, and quarried limestone. It really is a gem, and worth 45 minutes or more of anyone’s time in this lovely riverside village.