Steph and I have been members of the National Trust since 2011, and so we took advantage of reciprocal membership to visit several National Trust for Scotland properties during our recent Highlands and Islands holiday.

Gardens always feature high on our list of National Trust “to do’s”. Steph’s the gardener at home however. I’m just the admirer and mow the grass. But when we found that we’d be quite close to one of Scotland’s most important gardens, Inverewe in Wester Ross, we made plans to visit before crossing to the Outer Hebrides. We came across the other big garden, Arduaine in Argyll & Bute, quite by chance. It was just a few miles from our accommodation on the penultimate night of the holiday. The third garden was attached to Brodie castle just east of Inverness that we visited on Day 3. We turned up at Brodie only to find that the castle was not open to the public on a Friday, so we spent an hour wandering around the small garden and learning more about daffodils! More of that later on.

Inverewe Garden
This is an oasis of almost tropical splendour on the banks of Loch Ewe in northwest Scotland, about 50 miles southwest of Ullapool.

We spent the night of Day 5 of our holiday at Braemore about 12 miles south of Ullapool at the southern end of Loch Broom.

Loch Broom from the south.

Having booked passage on the 17:30 ferry to cross over to Stornaway on the Isle of Lewis from Ullapool, we had the whole day to visit Inverewe. The weather was not promising when we started out for Inverewe, with low cloud and spitting rain. Typical Scottish weather you might think. However, within just a few miles, the clouds lifted and we were treated to a bright sunny day for the rest of our journey and the two to three hours we spent walking around the garden before heading back to Ullapool for the ferry. Given that a major storm was expected later that evening, and as ferry crossings had been disrupted in previous days we did try to change our booking to the morning crossing at 10:30. No such luck as it was already fully booked. So we just went ahead with the plan we’d already made—and thoroughly enjoyed our visit to Inverewe Garden.

Opened in 1862, the garden was the brainchild of one Osgood Mackenzie who, having planted 100 acres of woodland to protect the garden, set about creating a sub-tropical paradise at almost 58°N, and nurtured by the warm waters of the North Atlantic Drift, full of exotic plant species.

It was taken into ownership by the National Trust for Scotland in 1952. Inverewe is famous for its rhododendrons and azaleas (some of which were damaged in gales in early 2015, especially some very old and large specimens), and is laid out in informal blocks representing different parts of the world, such as China, Tibet, Japan, New Zealand and the like. There are even tree ferns and several specimens of the very rare Wollemi pine from Australia. 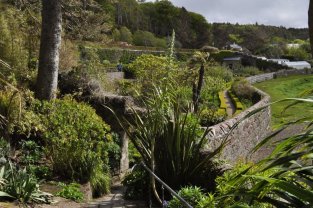 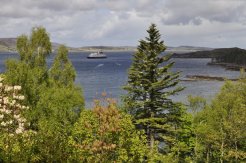 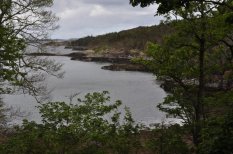 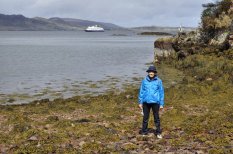 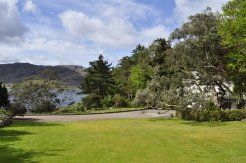 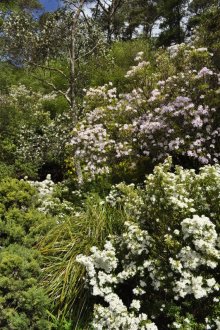 Arduaine Garden
Just 20 miles south of Oban beside the A816 (and 12 miles short of the village of Ford where we had a room booked) Arduaine Garden was a complete surprise. We originally passed it at about 17:30. It was already overcast, windy and drizzly, but we pulled in anyway to get our bearings and see when the garden was open. 09:00 to sunset! So we decide that if the weather was fine the following morning we would retrace our steps and spend a couple of hours there before re-retracing our steps to Ford, Loch Awe and on to Loch Lomond. 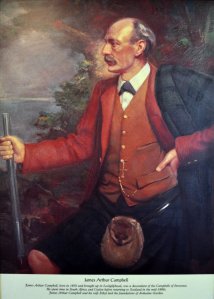 Established in 1898 by James Arthur Campbell on a peninsula jutting out into Loch Melfort (and with views from the headland all the way to the mountains on the Isle of Mull to the northwest), Arduaine lies at 56°N. It is full of rhododendrons and azaleas that were still in full bloom compared to what we had encountered at Inverewe. The garden was gifted to the National Trust for Scotland in 1992.

Arduaine has a more intimate feel about it than Inverewe, and perhaps for that reason I enjoyed my visit here more than to Inverewe.

Or was it because there were far fewer visitors at Arduaine? Afterall, we did arrive just a short while after garden opened and we had it almost to ourselves for the duration of our visit. 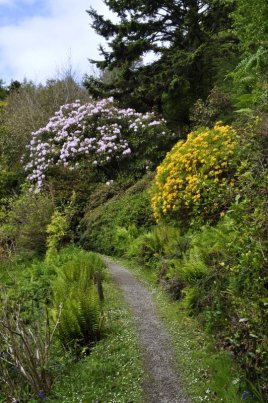 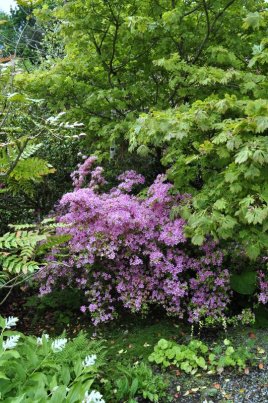 Brodie Castle
Lying just to the west of Forres on the north coast of Scotland, Brodie Castle has been home to generations of the Clan Brodie, and the last clan chief lived there until 2003.

The castle was built in the 16th century. Major Ian Brodie, the 24th Brodie of Brodie, began assembling a collection and breeding daffodils in 1899, and eventually there were more than 400 different varieties grown. Some have been lost, but the National Trust for Scotland is attempting to re-establish this important collection. I never knew there was so much to daffodils. 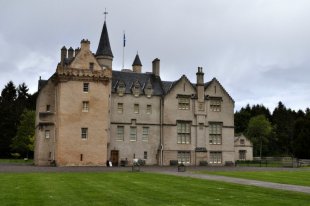 In the garden of Brodie Castle