It’s one of the big ‘what ifs’ of British history.

How would Britain as a nation and British society have evolved had the 1745-46 Jacobite Rising of the Young Pretender, Bonnie Prince Charlie (or, to give him his full name: Charles Edward Louis John Casimir Sylvester Severino Maria Stuart, born 31 December 1720, died 31 January 1788) been successful. Would there still be a Union? But he wasn’t successful, and this uprising ended with the last battle fought on British soil at Culloden in 1746. It had a long-lasting impact on Scotland, particularly in the Highlands.

He raised his standard at Glenfinnan on the west coast of Scotland on 19 August 1745 in a bid to reclaim the throne for his father (The Old Pretender, James Francis Edward Stuart, son of deposed King James II, and accepted by many as the rightful heir) from the ‘usurper Hanoverians’.

During our recent road trip round Scotland we came across a number of sites associated with Bonnie Prince Charlie and the 1745. Having made our trip counter-clockwise, we reached Glenfinnan on the penultimate day of our holiday. The weather was atrocious: driving rain and strong winds. In fact I had wanted to make the 15 mile or so detour west of Fort William to see the Glenfinnan viaduct on the railway connecting Fort William and Mallaig. For all you Harry Potter fans, the steam train that runs on this West Highland line featured as The Hogwarts Express in several films.

The Glasgow-Mallaig train arrives on time.

When we arrived at the Glenfinnan visitor centre, I realized that I had seen the Glenfinnan Monument (that commemorates the raising of the standard) on a couple of previous occasions, but never in such weather. We did get tickets to climb the monument—maximum four people at a time plus the guide. It’s an extremely steep and tight stone spiral staircase up the monument, and you have to almost limbo dance to squeeze out through the manhole, that couldn’t have been more than 18 inches square. I did manage my photo of the viaduct from there, and just as we walked back to the Visitor Centre, we heard the steam train puffing its way through the station, where we had been no more than 20 minutes previously. No-one had cared to advise us that the steam train was expected imminently!

During the 1745 uprising, the Jacobites marched south into England, reaching Derby by early December. And it was at this point that they effectively lost their campaign. Some historians believe that the Hanoverian government forces could have been defeated at that time, but Charles Edward Stuart turned round and led his forces back into Scotland, where they were caught and defeated at the Battle of Culloden on 16 April 1746. The battle site is just east of Inverness, managed by the National Trust for Scotland property, and seemingly the site for pilgrimage by people of Scots ancestry from all over the world. The displays and explanations of the battle in the visitors centre are excellent.

Site of the Battle of Culloden, east of Inverness, on 16 April 1746 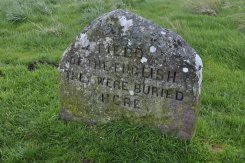 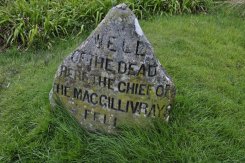 In South Uist we passed by the birthplace of Flora MacDonald, who helped Bonnie Prince Charlie escape into exile after Culloden, and also near where she is buried in the north of Skye.

While compiling information for this blog post, I’ve discovered a ‘personal’ link to Bonnie Prince Charlie. My home town is Leek in North Staffordshire: The Queen of the Moorlands. The Jacobite army passed through Leek in December 1745 on its way south. After turning round at Derby, it passed through Leek once again and there is anecdotal evidence that Bonnie Prince Charlie stayed the night in a small house at the top of the Market Place, just across the road from where I used to live, and next to the vicarage of the Church of St Edward the Confessor (where Jacobite soldiers sharpened their swords on a stone cross in the churchyard). 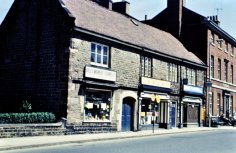 Bonnie Prince Charlie is reputed to have lodged here in Leek in December 1745. 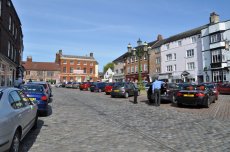 The Bonnie Prince Charlie house is on the left at the top of the Market Place in Leek.

Yesterday, however, I read another account that states that the Prince did not stay in this house after all, but lodged instead in a much finer house, one built in the late 17th century, and located about 200 m east on Stockwell Street. Now a listed building, ‘Greystones’, was once divided into two apartments and rented by the local authority. From 1976 until the mid-1980s, my parents resided in the apartment on the upper two floors. I never had the least inkling whenever I visited them there that this just might have been the place where Bonnie Prince Charlie lay his weary head and dreamed on what might have been. 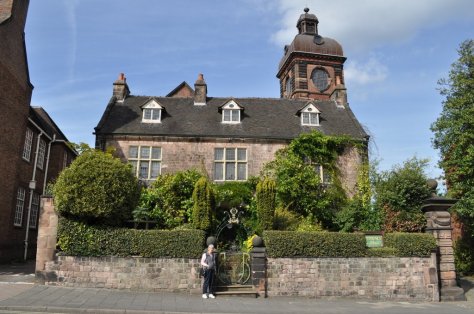 ‘Greystones’ is a late 17th century listed building on Stockwell Street in Leek. It stands in front of the local library, art gallery and museum, the Nicholson Institute, the tower of which can be seen behind. ‘Greystones’ was once occupied by silk manufacturer Joshua Nicholson, who built the Institute in 1884.