Ernest who? Ernest Marples. Minister of Transport in the Harold Macmillan and Alec Douglas-Home Conservative governments between October 1959 and October 1964.

As Minister of Transport he introduced parking meters, the provisional driving licence, the MOT test, yellow parking lines, and traffic wardens. He also oversaw an expansion of the road network and the opening, in November 1959, of the first section (53½ miles) of the M1 motorway, between Luton and Crick (although it had been inaugurated a year earlier).

The M1 was not the country’s first motorway, however. That honor is given to an 8¼ mile section of the Preston by-pass, opened in November 1958, and which became part of the M6 motorway.

I remember the first time my father took us on the recently-opened first section of the M1. It must have been around 1960. What an experience on such wide carriageways, and very little traffic. That’s hardly the case today. More like Chris Rea’s The Road to Hell, released in 1989, supposedly about the London Orbital Motorway, the M25, although, to be fair, it could be about any of our motorways.

So much congestion, lines of juggernauts traveling nose-to-tail. I never relish having to take one of the motorways for my journeys, but they are a necessity. Many motorways were constructed with three lanes in each direction, but some like the M5 (opened in 1962 and connecting the West Midlands with the southwest of England) had only two for much of its length, but later widened to three.

From those humble beginnings more than 60 years ago, the motorway network in Great Britain (not including Northern Ireland) now extends over 2300 miles (out of a total of 247,500 total road miles). Another 29,500 miles are A roads, major routes connecting cities, but only about 18% are what we in the UK call dual carriageways (divided highways in the US).

Originally there was no speed limit on the motorways. In December 1965 a temporary speed limit of 70 mph was introduced and made permanent in 1967. That remains in force today on motorways and dual carriageways, with 60 mph the limit on other A and B roads. The limit in urban areas is generally 30 (maybe 20) mph.

But if you want to really explore the countryside, as Steph and I like to do, then you have to get off the main routes and take the B roads, as you can see in this video, which I made recently as we crossed Northumberland (in the northeast of England). In any case, for me it’s never about the trip itself but the many interesting places and sights along the way.

I passed my driving test (at the second attempt) in May 1966, six months after my 17th birthday, the earliest age when one can apply for a driving licence here in the UK. I got to drive my father’s car from time to time, but while away at university between 1967 and 1972 I didn’t have much opportunity to drive, until I had my own car (in October 1971), a rather battered Ford Anglia. In September 1972 I bought a new left-hand drive Volkswagen Variant to export to Peru, where I moved in January 1973.

Between 1973 and 1981 we lived in Peru and Costa Rica (in Central America), and from 1991 spent almost 19 years in the Philippines (from where we traveled to and down the east coast of Australia). We also made two road trips around Ireland in the 1990s while on home leave from the Philippines. Our road trip experiences were very different.

And, since 2010, we have (until the Covid pandemic struck) visited the USA every year and made some epic road trips that are described briefly later on.

Touring Peru
A couple of months after I arrived in Peru, the ship carrying my Volkswagen finally docked at Callao, the port for Lima. It was just the right sort of vehicle for the rugged roads that Steph and I traveled exploring that fascinating country. Solid suspension (although I did add heavy-duty shock absorbers) and an air-cooled engine. 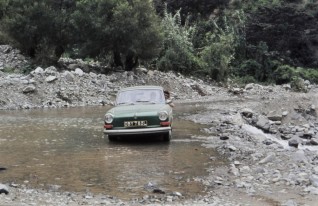 Almost five decades ago, there were few paved roads in Peru, the main one being the Panamerican Highway stretching the whole length of the country, just a single carriageway in each direction. And the Carretera Central from the coast to the central Andes at Huancayo, crossing the high pass at Ticlio on the way. 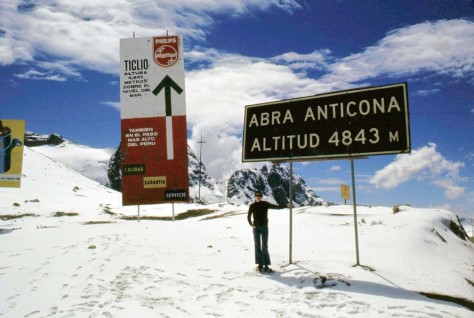 Most elsewhere, apart from in the towns and cities, the roads were unpaved. And through the Andes, these roads followed the contours of the valleys. Often you could see your destination in the valley below, but know there would be many kilometers to travel as the road snaked down the valley, as you can see in these photos.

Then there was the ever-present danger of landslides which might take hours if not days to clear, or precipitous drop-offs at the side of the road. I remember on one occasion driving along one road (in fog) in the north-central part of Peru, and afterwards checking the maps to discover that the drop was about 1000 m. 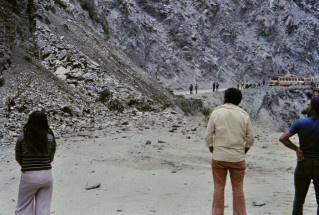 Three of the most interesting trips we made were to Arequipa and Puno on the shore of Lake Titicaca in the south of the country, to Cajamarca in the north, and to Ayacucho and the central Andes on another occasion.

In Costa Rica
Many of the roads in Costa Rica were paved when we lived there in the mid-70s, with some notorious exceptions. Turrialba, where we lived, lies 41 km due east from Cartago (San José lies a further 19 km beyond Cartago). From Turrialba to Cartago, there’s a climb of almost 800 m, passing through a cloud zone (zona de neblina) on a narrow and twisting road that was, back in the 1970s, unpaved for most part.

Further this was the main route from the Caribbean port of Limón on the east coast to San José, and was always busy with one juggernaut after another. Not to mention the tractors towing a dozen or more sugar cane carts along sections of the road, without any hazard lights whatsoever. 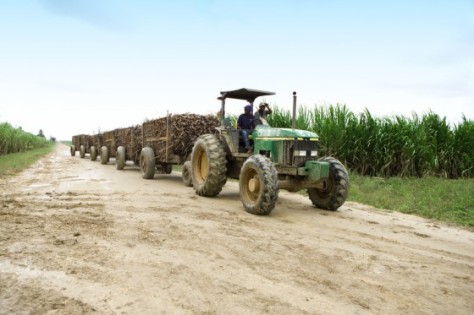 The Philippines
Mostly, the Philippines has good roads. It’s just the congestion and the lack of driver discipline that makes driving in that country stressful. Also, farmers drying their rice or maize harvest along one side of an already narrow road.

Drying maize along the highway in Nueva Ecija, north of Manila. The more numerous rice farmers do the same.

Los Baños is sited along the shore of Laguna de Bay, and on the lower slopes of a dormant volcano, Mt Makiling. It’s almost 65 km south of Manila and, on a good day, a little under 90 minutes by road. Back in the day we used to joke that it took anywhere between 90 minutes and a lifetime to make the journey. Major road improvements took almost 15 years to complete and with traffic congestion (caused mainly by tricycles and jeepneys) the journey could take several hours. Here’s a short video of a trip to Tagaytay (a town that overlooks the Taal volcano), about 50 km west of Los Baños by the quickest route (map).

In 2009, my staff, Steph and I made a long-weekend trip to the world-famous rice terraces in the Ifugao-Mountain Province of northern Luzon. Staying in Banaue, we took a jeepney to the end of the trail leading to the Batad rice terraces.

From there we had to hike for well over an hour deep into the valley.

Steph and I would also spend about eight weekends a year on the coast at Anilao (map) where I scuba dived and she would snorkel.

When we first visited Arthur’s Place in March 1992, there was no passable road from Anilao to the resort, and we had to take a 30 minute outrigger or banca ride. By 2009, the road had been paved.

Touring the USA
I really enjoy driving in the USA, once I’d become familiar with a number of the driving norms and the various road signs. Our elder daughter lives in Minnesota so our trips have begun or ended there. Thank goodness for the interstate highways whose construction was begun under President Eisenhower in the 1950s. We prefer to follow the US or state highways mostly if we can, even county roads.

These are the trips we have taken: 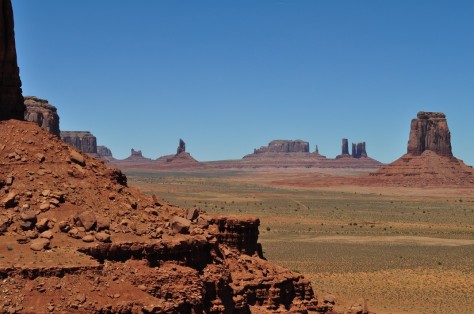 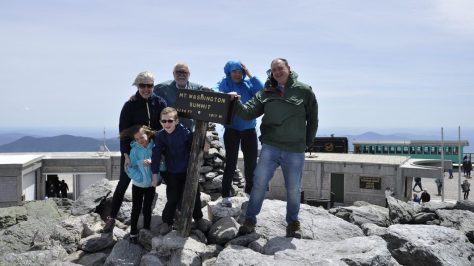 And, along these travels, one thing that caught my attention. In the UK, road construction has involved the building of just a few major bridges, over river estuaries, the most recent being a second bridge crossing the Firth of Forth west of Edinburgh in Scotland.

Not so in the USA. East-west or north-south, immense bridges had to be constructed across the many rivers that criss-cross that vast country. Some of the most impressive have been along the Mississippi, Missouri, and Ohio Rivers.

Simon Kenton Memorial Bridge over the Ohio River at Aberdeen, OH connecting OH and KY on US62.

Champ Clark Bridge carrying US54 from IL to MO at Louisiana, MO.

Here are a few more over which we drove.

A few weeks ago I read a novel that was set on the Lincoln Highway, the first to connect the east and west coasts from New York to San Francisco. I have traveled parts of the highway during the trips I’ve already outlined, but wasn’t aware of that at the time.

One thought on “The importance of being Ernest”