Milestone, near the Queen’s Head pub, a couple of miles south of Tardebigge.

It’s 1807, and fields around Tardebigge, a small settlement east of Bromsgrove in northeast Worcestershire, are swarming with hundreds if not thousands of workmen, known as navvies (from the name by which canals were also known at the end of the 18th century: ‘navigations’) facing their next challenge in the construction of the 29 mile Worcester and Birmingham Canal that would finally open in 1815 after reaching Worcester on the River Severn. That’s what I imagine it must have been like.

Tardebigge is almost equidistant between Birmingham and Worcester. It had already taken 15 years just to dig this first level section of the canal, on the same level as Birmingham (at 453 feet above sea level).

While engineers had avoided building any locks as far as Tardebigge, they had to construct four tunnels, the longest (at 2726 yards) taking the canal under the Lickey Hills (the Wast Hills Tunnel). North of Tardebigge they also constructed the Bittell Reservoirs, to feed the canal. 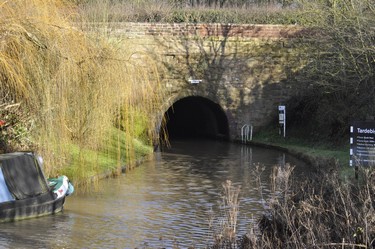 South from Tardebigge the engineers and surveyors had to drop the canal almost 430 feet over the next 15 miles to Worcester, constructing 56 narrow (7 foot) locks, and two larger ones at Worcester where the canal meets the River Severn.

Immediately below Tardebigge there is a flight of 30 locks, the longest in the country, in the space of under three miles. And another reservoir, and a pumping house (now converted to luxury apartment).

Following the Tardebigge flight is one of my favorite walks. On 11 April, I made a walk of just over six miles, covering much of the same route I described in an earlier post. On this latest walk, I went beyond the Tardebigge Reservoir, leaving the towpath where London Road crosses the canal, and less than half a mile from the last lock of the flight, Tardebigge Top Lock (the deepest of all the 56 narrow locks).

Take a look at the route of this walk. There is an image (or more than one) linked to each of the red via points.

Overlooking the canal at Tardebigge is the late 18th century church of St Bartholomew. From there one can see  the spire of 12th century St John’s Church in the center of Bromsgrove itself. In the image below, the spire can be seen just to the right of the chimney on the right. Click to enlarge the image. 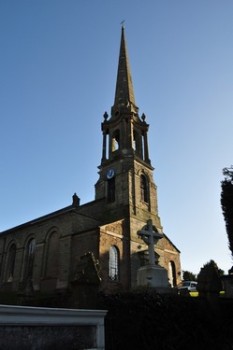 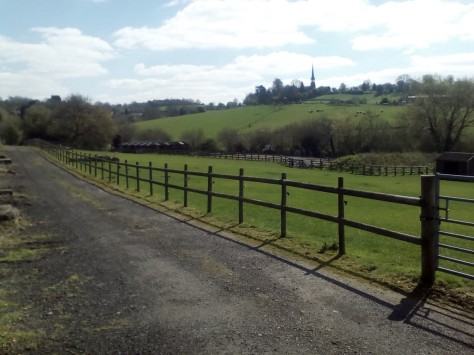 Looking east to Tardebigge church and the canal, from Dusthouse Lane.

What I find myself thinking about, as I walk the towpath, is just what it took to dig the canal, and construct the locks. How did they achieve all this without recourse to machinery? Each of the locks is brick-lined, and some are edged with large and beautifully dressed sandstone blocks. Were the bricks made on site, or transported to each lock? Where did the sandstone come from? And the lock gates (double on the lower side, single on the upper), made from huge oak beams, weighing (when assembled) over a tonne? You can’t help wondering how they managed to position all these into place. On many sections there are no nearby roads linking with the canal. How many navvies were injured, or killed even, during the whole construction.

My walk route also parallels the rail line south to Stoke Pound, crosses underneath there, and again at Finstall on the north side. Approaching the line one cannot but be impressed by the engineering needed to raise level embankments over undulations in the landscape, yet climb the gradient of the Incline to its summit north at Barnt Green.

How many more thousands of navvies swarmed once again into Bromsgrove and surrounding areas while the line was being constructed?

Today the line through Bromsgrove carries commuter services on the recently-electrified Cross City extension (of West Midlands Railways) from Birmingham (and connecting with Lichfield in Staffordshire), or on diesel units south to Hereford via Worcester and Malvern. CrossCountry services hurtle through Bromsgrove (as seen above) on their way south to Penzance at the tip of Cornwall, via Bristol, or north to Aberdeen in the northeast of Scotland, via Birmingham, York, Newcastle, and Edinburgh.

So much industrial history to absorb, and so much to think about while enjoying the tranquility and beauty of this north Worcestershire landscape. I never ceased to be awed by what was achieved.